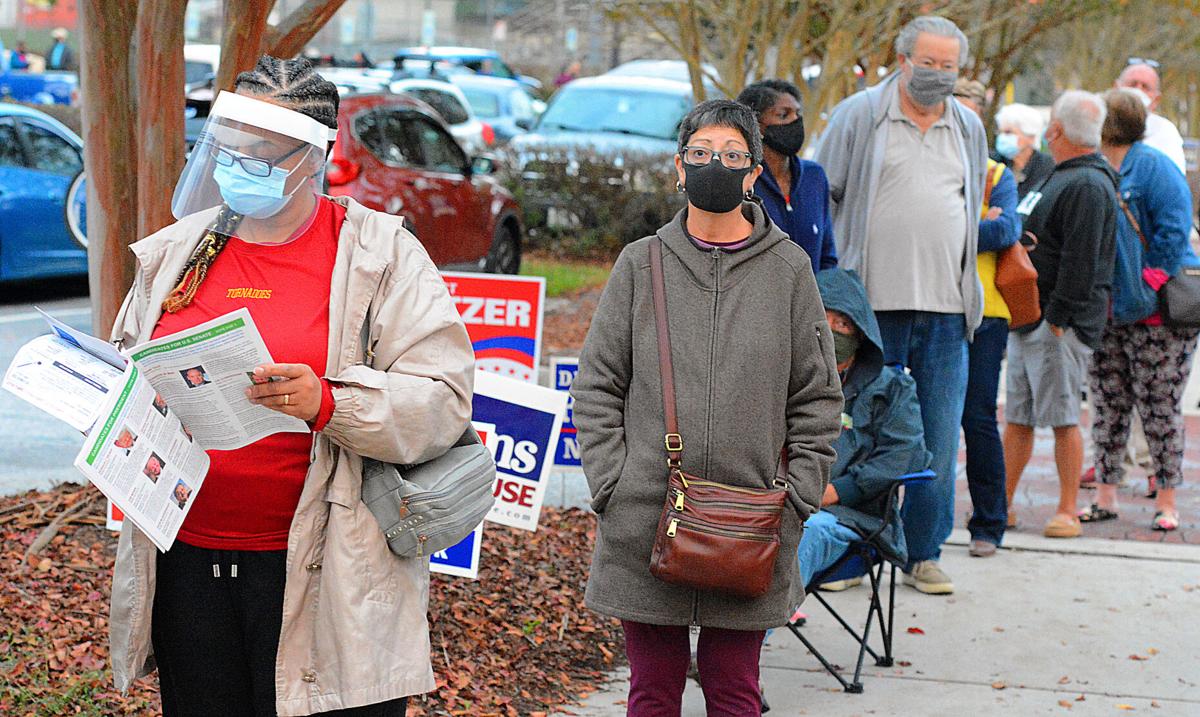 Voter Antone Scott (left) studies information on political candidates as she waits in line to vote at Highland Recreation Center during the first day of early voting. 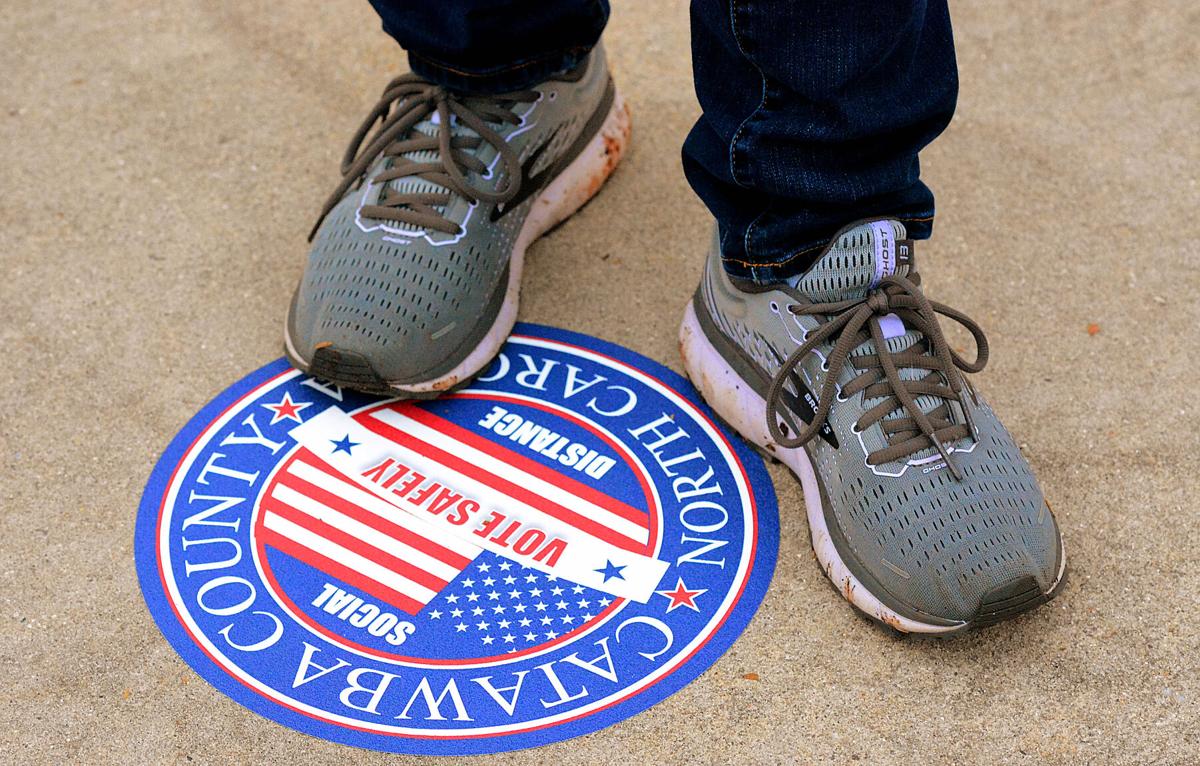 Voters were heeding social distancing markers at Highland Precinct during the first day of early voting. 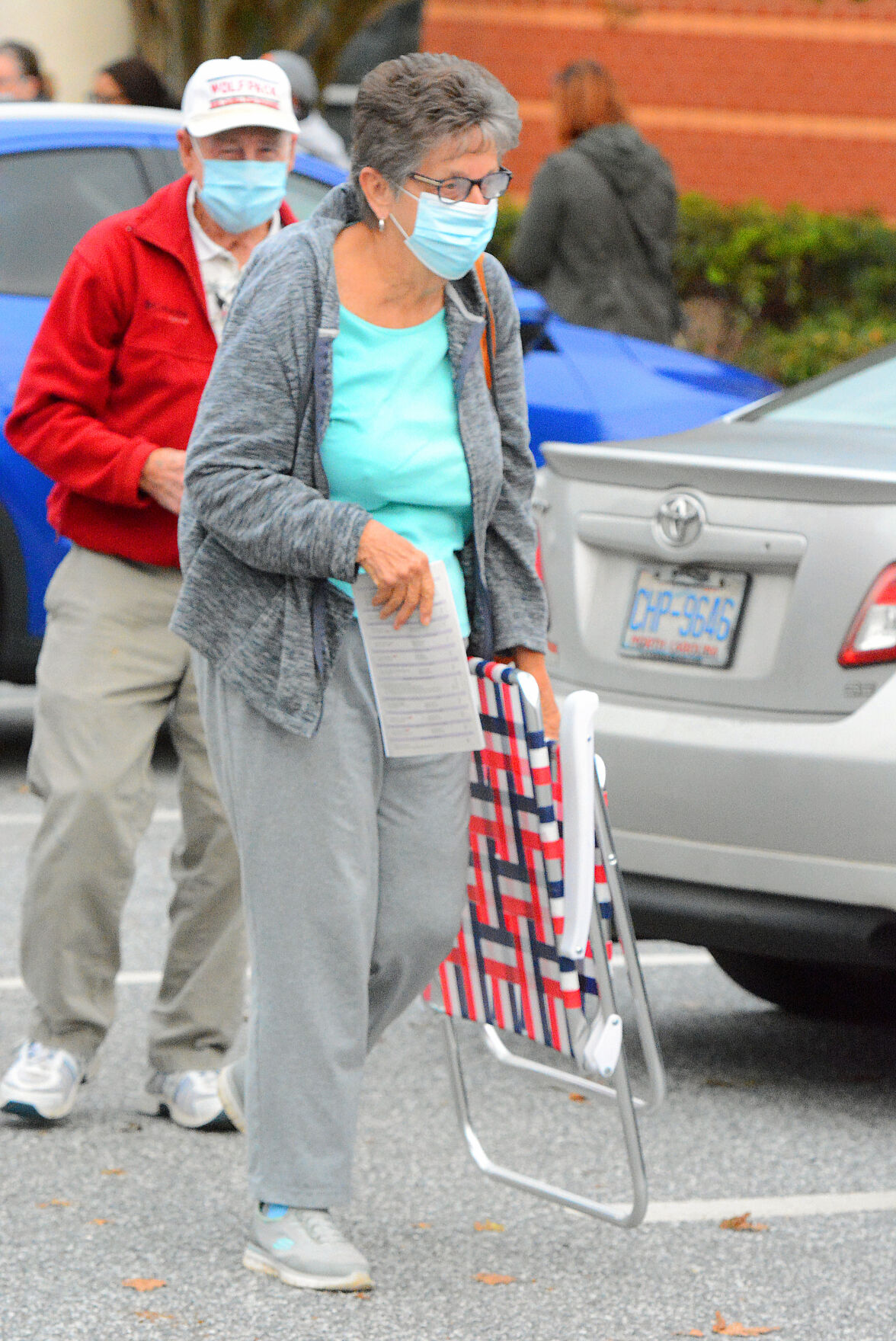 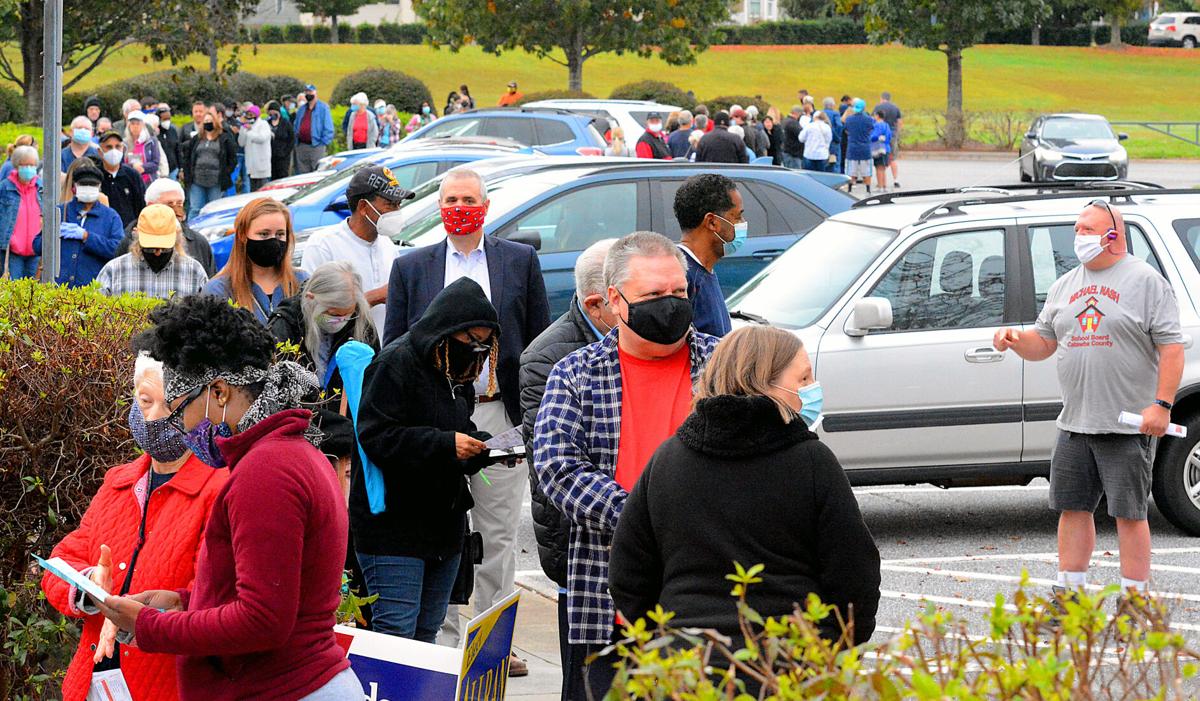 Voters are trying to social distance at Highland Precinct during the first day of early voting as the line winds around the building.

A better life for future generations. American democracy. The very survival of America.

All these things are at stake in the 2020 elections, according to some of the people who showed up to cast their ballots on the first day of in-person early voting on Thursday.

The line at the Highland Recreation Center — one of five locations open for early voting in Catawba County — had already formed when the doors opened at 8 a.m.

By 10 a.m., there was a line stretching from the entrance down the sidewalk and back to the first row of cars in the parking lot. Some voters who were leaving the voting site at 10 said they’d gotten there shortly after the polls opened.

At another early voting site, the Catawba County Library in Newton, there was a line running from the building entrance to the sidewalk by S. Ashe Avenue just before noon.

Signs of the pandemic’s impact on this year's elections were evident. Many voters wore masks and poll workers were dressed like hospital staff.

People who came out to vote in the presidential election described this as the most important election in their lifetimes.

70-year-old Hickory resident and Trump supporter Phil Smith said he believed the survival of the country is at stake this year.

He said he supported Trump’s approach to law-and-order issues, immigration and health care. “He’ll take care (of those issues),” Smith said. “His hands, looks to me, have been tied for the last several months but I think that will all end when he’s reelected.”

Maiden resident James Picklesimer, 71, a Trump supporter, said he thought the country was “really degrading” and needed to be put back on track. “He’s for law and order and for our American heritage and for the people of America,” Picklesimer said. “I think he stands for the people and not just for a bunch of rules and regulations and stuff.”

Brenda Arnett, a Newton resident in her 70s, said “the last (few years) just have been awful.” She added, “Our leader lies to us and he just doesn’t seem to be interested in trying to make any positive changes, so we need a change."

Biden voter Janie Hughes, 68, of Conover, said she was concerned with health care and the rights of minorities and women.

“I think it needs to be back to a time when people were decent to each other, where people could talk to each other, but we also need to move forward where everybody has rights and it’s time to give Black people, brown people and women — everybody — their place in this country now,” Hughes said.

Early Voting: What to Know

Catawba County voters can vote at any one of these sites regardless of where they live.

For more elections information, call the Catawba County Board of Elections office at 828-464-2424

Voters will not have to show photo ID to vote this election.

However, unregistered voters who use same-day registration may be asked to produce some documentation to prove residency.

A government-issued photo ID, copy of a current utility bill, bank statement, student ID with proof of campus residence or a government check are examples of acceptable documentation.

Darian Abernathy stepped up to the podium in front of the Catawba County Board of Commissioners and quietly stated her name. In a low voice, s…

The Hickory City Council awarded a $7.2 million contract for the construction of the second half of the Riverwalk bond project at its meeting …

Nearly a third of all currently registered Catawba County voters have already voted with less than two weeks until Election Day.

Voter Antone Scott (left) studies information on political candidates as she waits in line to vote at Highland Recreation Center during the first day of early voting.

Voters were heeding social distancing markers at Highland Precinct during the first day of early voting.

Voters are trying to social distance at Highland Precinct during the first day of early voting as the line winds around the building.