Fauci affirms Biden's commitment to WHO. Here's what it means moving forward.

Construction workers prepare the site of the new Dollar General at the intersection of 12th Avenue and 10th Street Boulevard NW. The project has received some backlash from residents and real estate agents concerned with the way the store may affect the neighborhood.

Some residents are expressing concerns about the Dollar General store being built off 10th Street Boulevard NW. 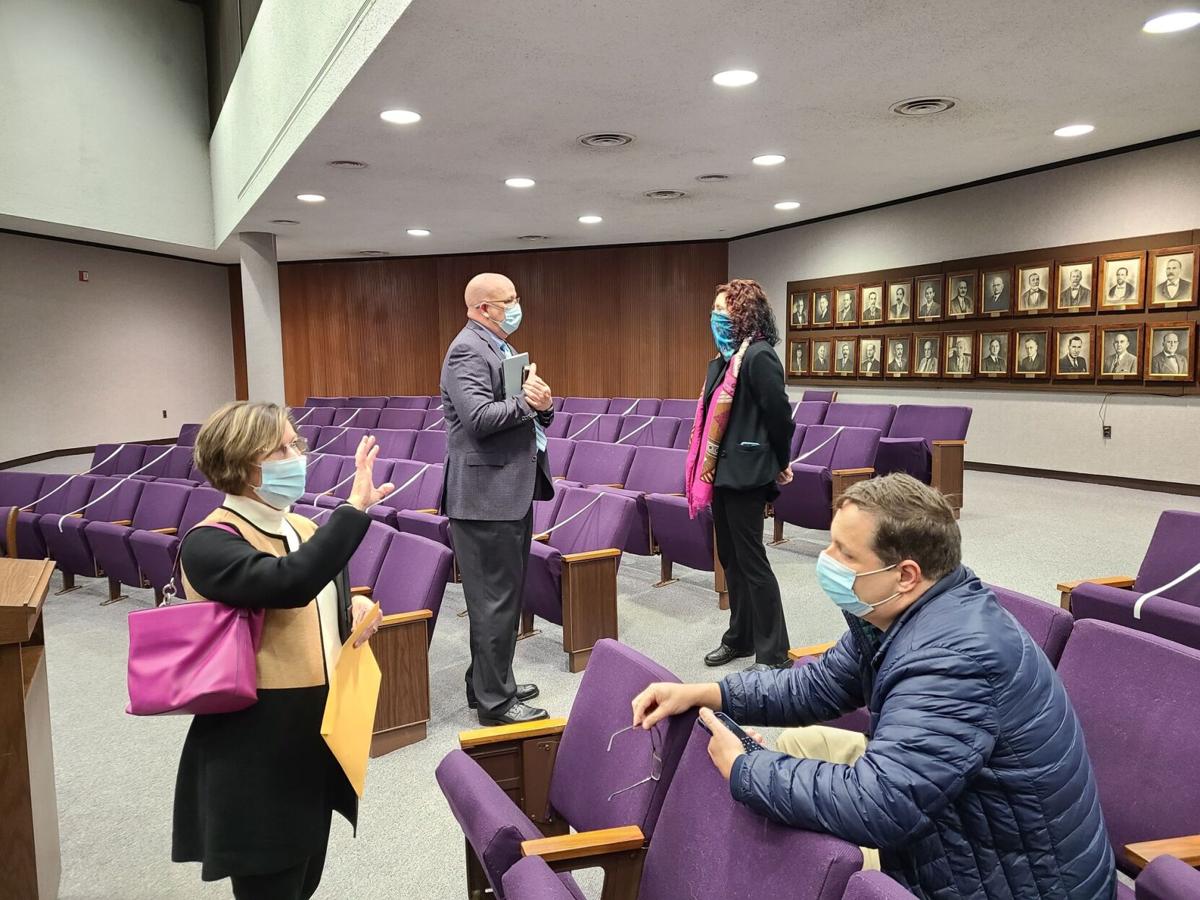 Chris Simmons (front right) and Meredith Carswell (back right) discuss plans for the new Dollar General in northwest Hickory with Councilwoman Jill Patton (front left) and Councilman Tony Wood (back right). Simmons and Carswell are concerned about the impact the store will have in the neighborhood.

Three Hickory residents went to the Hickory City Council Tuesday to voice concerns over a Dollar General store planned for northwest Hickory and to ask if anything could be done to minimize the impact of the store.

Developers received the go-ahead in December to begin construction on the dollar store near the intersection of 10th Street Boulevard NW and 12th Avenue NW at what was once the site of the Lutheran Home.

The store could be open as soon as this spring.

Chris Simmons, who lives near the site where the store will be located, said the store’s presence has prompted a backlash in the community.

“Opposition is broad and deep,” Simmons said. “We’ve had almost 300 people sign a petition opposing it because of the sense that it is an inappropriate fit for the neighborhood that it’s going into.”

The Change.org petition opposing the store argues that the dollar stores are magnets for violent crime that crowd out other healthier food options that might locate in an area. The petition had surpassed 300 signatures as of Wednesday.

Following Simmons, real estate agents Meredith Carswell and Robin Creel spoke about the project. Carswell and Creel do not live in the neighborhood but they said the changes would have an effect on their clients and other people they knew.

Carswell said residents and real estate agents alike needed to have a better understanding of what zoning decisions mean for communities and asked to meet with the members to discuss the matter.

“If we can’t change what’s happening with this, going forward it’s important to me and other Realtors in this area to know that our residential neighborhoods are not going to be affected by stores — not just Dollar General but any neon sign store,” Carswell said.

Creel asked the council if there was anything that could be done to make the store fit in better with the surrounding residential community.

He noted the store would be located near the Old Lenoir Walk, one of the planned walking and biking trails included in the city’s $40 million bond program, and the site would be highly visible.

Mayor Hank Guess addressed the comments at the end of the meeting. He said the property had been rezoned in 2018.

He said the property was not specifically rezoned for a Dollar General.

The city did not seek out the store but the store was allowed to go in there because the zoning fit and there was nothing the city could do to stop it since the use complied with the zoning, Guess said.

Simmons, Creel and Carswell continued their discussions with members of council and Planning Director Brian Frazier after the meeting.

Speaking with Simmons and Carswell, Guess reiterated that all proper procedures had been followed with the rezoning and there was no reason not to change the zoning.

“I’m not convinced that the zoning was incorrect for that piece of property,” Guess said.

He added: “So there could have been something there less desirable. You can’t zone a property to eliminate stuff like this from happening.”

He also said he had heard from people who favored the store locating there.

Simmons said the city should be purposeful in its zoning decisions.

“Hickory’s been meticulous about its zoning through its whole history and it needs to be now,” Simmons said.

Creel said Frazier told him the city had rejected some plans for the Dollar General and the plans were changed so that it conformed more with the residential character of the neighborhood.

He added he was hoping to learn more at a later meeting with city leaders.

Simmons said he, Carswell and Creel are in the process of arranging a meeting with Frazier and a few members of the council to continue discussing the plans for the store.

The city of Newton will be using a $715,000 government grant to provide pandemic-related support to residents, businesses and charity organiza…

The Hickory City Council and Catawba County Board of Commissioners will conduct a joint meeting on Jan. 20 to hold public hearings on economic…

Hickory City Manager Warren Wood was blunt in his assessment of racial and ethnic inequities in the city.

'Opposition has not changed': Group still asks that Confederate statue be moved

In trying times for America, a little prayer couldn't hurt.

The Hickory City Council will hold a special meeting Tuesday to hear a presentation related to economic and demographic data in Hickory.

Construction workers prepare the site of the new Dollar General at the intersection of 12th Avenue and 10th Street Boulevard NW. The project has received some backlash from residents and real estate agents concerned with the way the store may affect the neighborhood.

Some residents are expressing concerns about the Dollar General store being built off 10th Street Boulevard NW.

Chris Simmons (front right) and Meredith Carswell (back right) discuss plans for the new Dollar General in northwest Hickory with Councilwoman Jill Patton (front left) and Councilman Tony Wood (back right). Simmons and Carswell are concerned about the impact the store will have in the neighborhood.