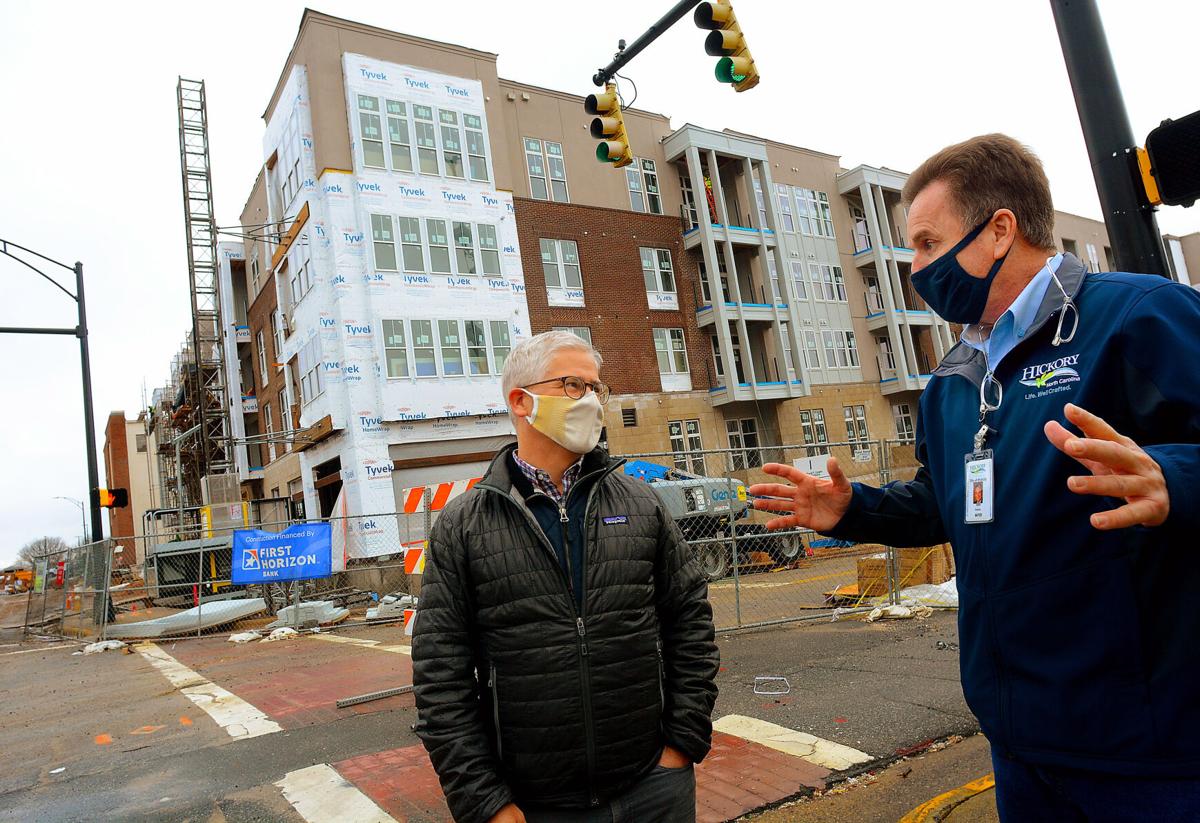 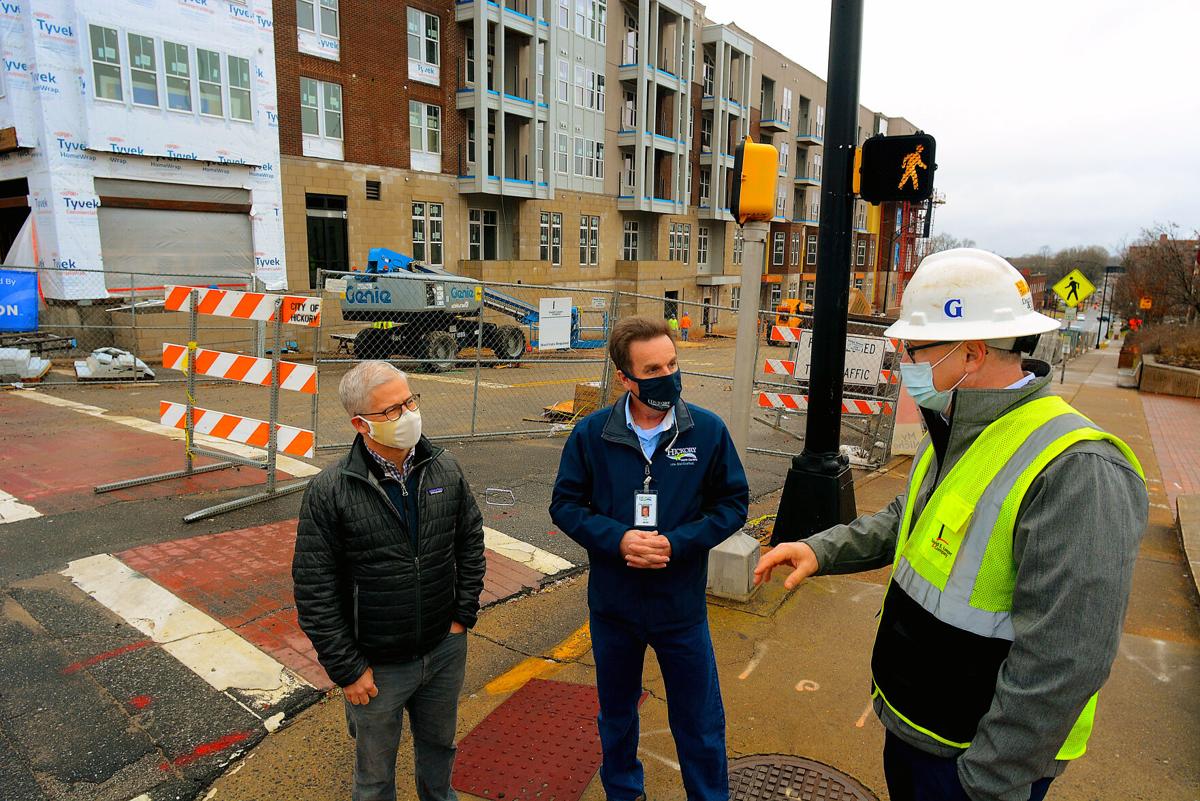 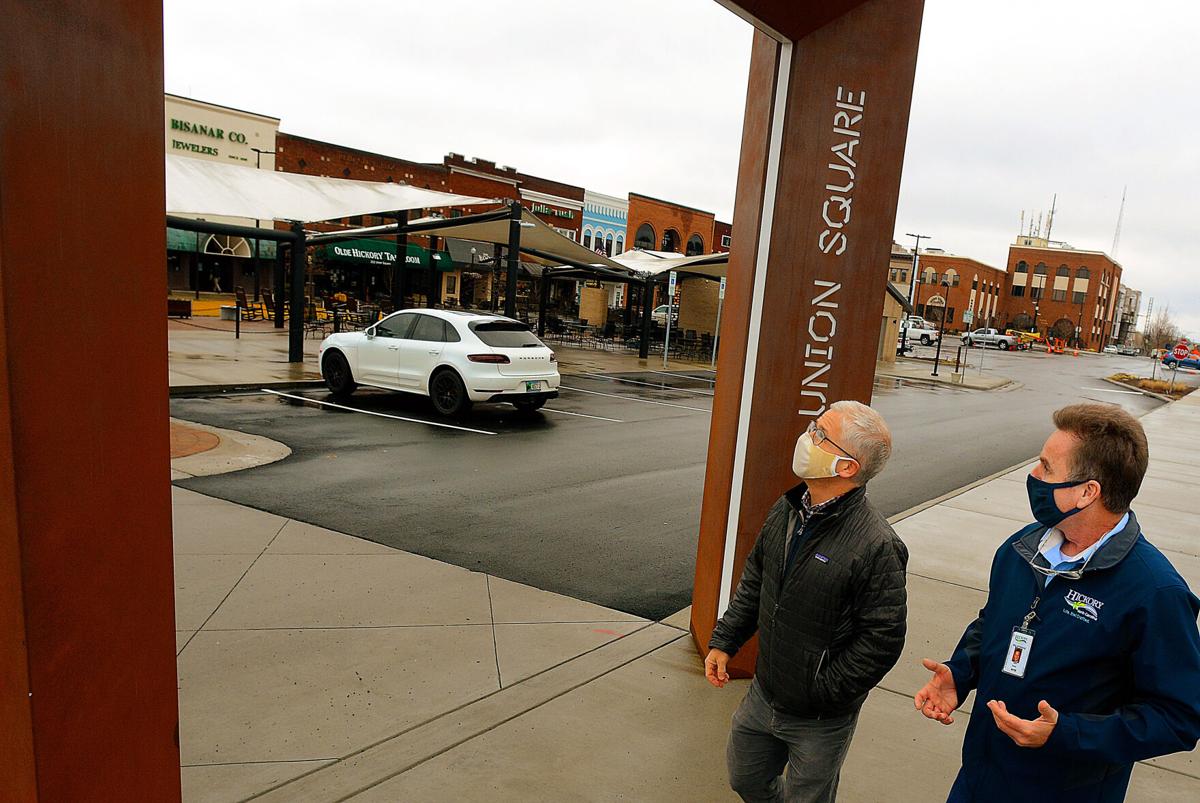 U.S. Rep. Patrick McHenry visited Hickory Tuesday morning to take a look at some of the projects underway in the city.

Mayor Hank Guess took McHenry on a tour of the City Walk and explained the role of these projects in the city’s plans for economic development and connectivity.

McHenry praised the efforts, saying it was “a great story of a small town picking themselves up, getting stronger and better for the next 100 years, 150 years.”

He also fielded questions from media on topics ranging from the recent impeachment vote to fraud in the 2020 election and his stance on COVID-19 relief.

McHenry voted against the article of impeachment against then President Donald Trump in January.

He said he did so because he believed it came too late for a trial to take place during Trump’s term and because of the lack of hearings prior to the vote.

McHenry did not directly address the substance of the charge that Trump incited an insurrection, only saying that Trump “has to answer for his words and activity on Jan. 6 and leading up to Jan. 6.”

He also commented on Sen. Richard Burr’s decision to vote in favor of convicting Trump, a move for which Burr was censured by the N.C. Republican Party.

McHenry said he respected Burr’s vote even though he disagreed.

“This was a vote of conscience and deep conviction on his part,” McHenry said.

He declined to say whether Burr should have been censured.

“The Republican Party has its role and they have their say and so does Sen. Burr,” McHenry said. “So, this is just the rough and tumble of politics and things will shake out over time.”

Burr will not be running for reelection in 2022. McHenry said he will not seek the open Senate seat next year.

McHenry said there was not enough fraud in the 2020 election to change the outcome.

“I don’t believe that there is a significant enough amount of fraud to tip the election in these key states, especially when you look at Pennsylvania or Michigan or Wisconsin in particular as three major states,” McHenry said.

McHenry voted to accept the slates of electors as presented by the states.

He said that since no states sent competing slates of electors, the U.S. Constitution and federal law compelled him to go along with what the state officials certified.

Storming of the Capitol

McHenry said he was at his home near the Capitol when it was attacked on Jan. 6.

When he saw the scene unfolding on TV, he began calling people he knew at the Capitol to see if everyone was alright.

He said attempts to subvert or overthrow the government would lead to bad consequences for the country.

“We will have less freedom and less economic productivity, less safety if we allow our system of government to be pushed aside,” McHenry said.

McHenry criticized the $1.9 trillion relief package Democrats are advocating, calling it too costly and not targeted enough.

He said only a part of the proposal actually addressed the pandemic and most of it was “the wish list that my Democrat colleagues have had waiting for a Democrat president.”

McHenry identified his priorities for another bill would include provisions that would allow schools to reopen, provide widespread access to the vaccine and testing, fund medical research and support specifically targeted to hard-hit industries.

“(My constituents) want to be able to reopen and go back to their jobs,” McHenry said. “They don’t need another government check and that will be far more sensible than this offering by Democrats.”

Sheriff: No evidence of impairment in Woods crash

Sheriff: No evidence of impairment in Woods crash

Gov. Roy Cooper expressed opposition to a school reopening bill that passed the N.C. General Assembly Wednesday. The bill was supported by Cat…

'There has to be a plan:' Hickory City Council holds workshop on racial disparities

Hickory City Council will hold a public workshop Tuesday to continue discussions of racial and ethnic disparities in the city.

The Conover Fire Department received a $2,857 federal grant that will go toward pandemic-related expenses, according to a release from U.S. Re…

The three state lawmakers from Catawba County have shown their support for a bill pending in the N.C. General Assembly that would require scho…

Riverwalk project expected to be complete by summer 2022

While the city of Hickory expects to have its City Walk project complete this year, residents eager to walk over Lake Hickory will have to wai…

The Hickory Police Department’s diversion program for people with addiction appears to have yielded some positive outcomes.