Measuring growth: A look at the bond project impact so far
0 Comments
Share this
{{featured_button_text}}
1 of 3 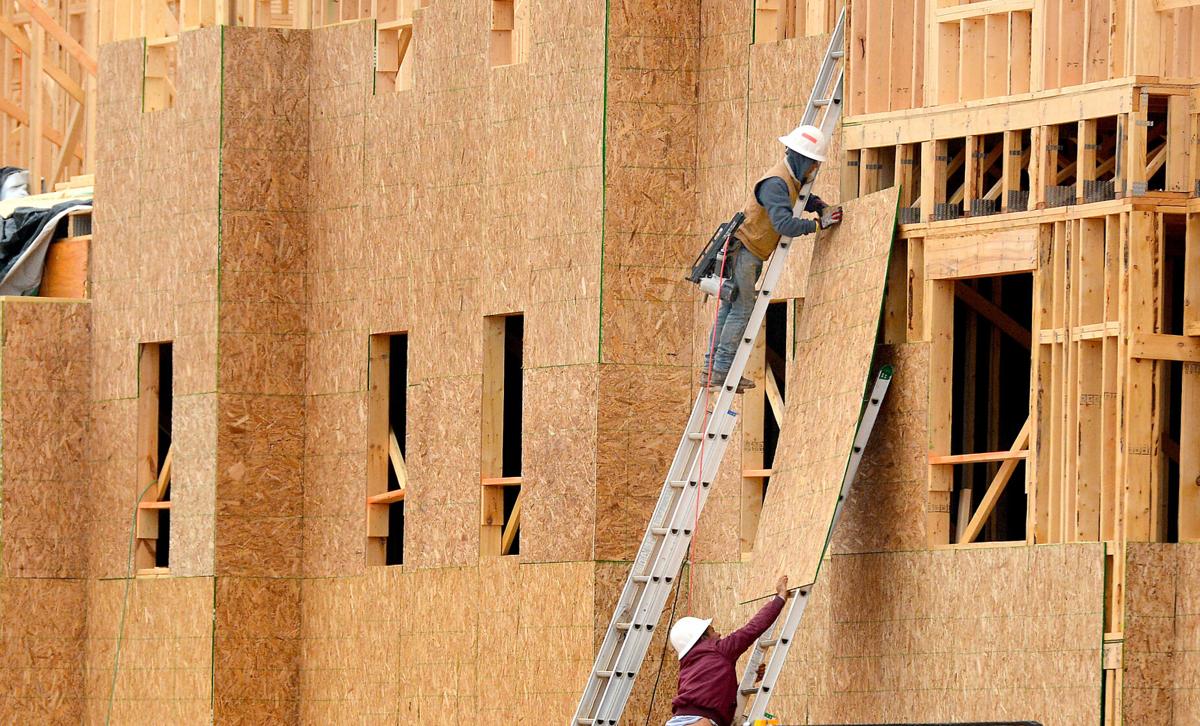 Workers continue construction on the Center Crossing apartment complex on South Center Street. The complex will be located near the City Walk and is one of several developments the city has linked to its bond program. 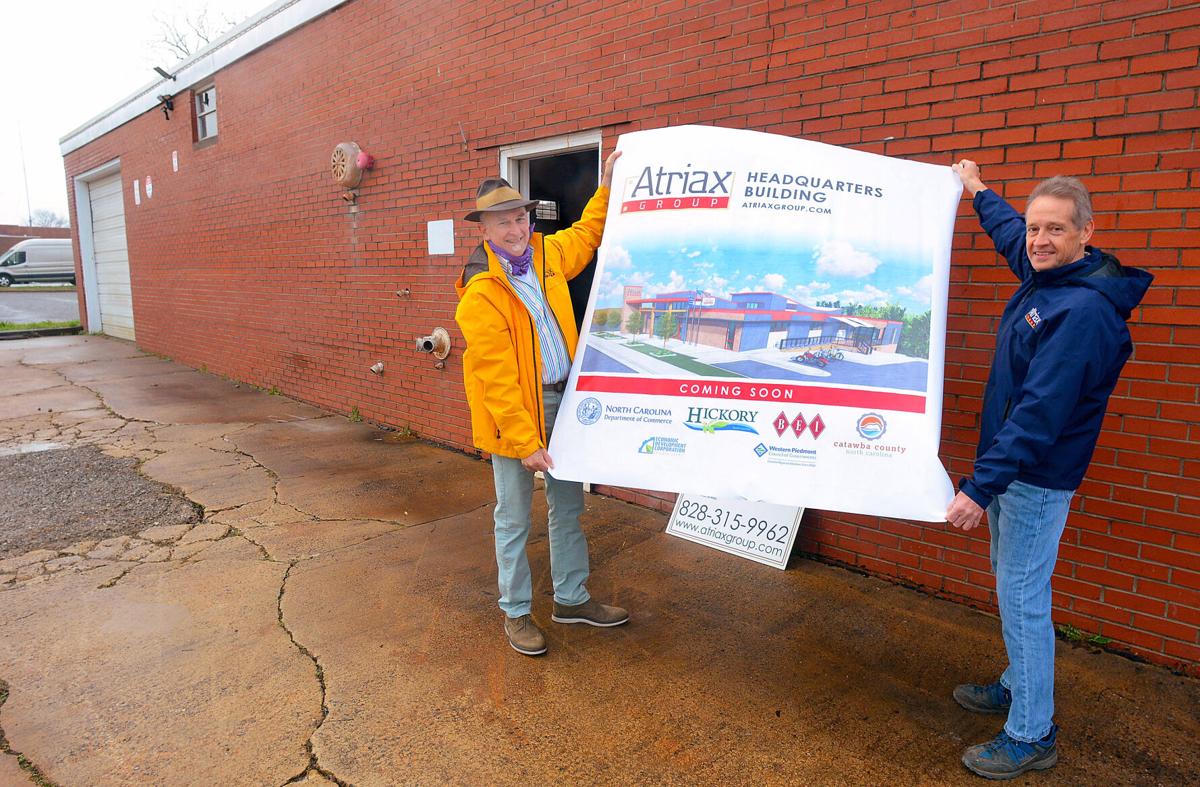 Bob Sinclair, left, and Simon Lucas of Atriax Group display a rendering of the new Atriax office building. They are standing in front of the building where the company will be relocating. Sinclair said the nearby City Walk was an important factor in the company's choice to locate there. 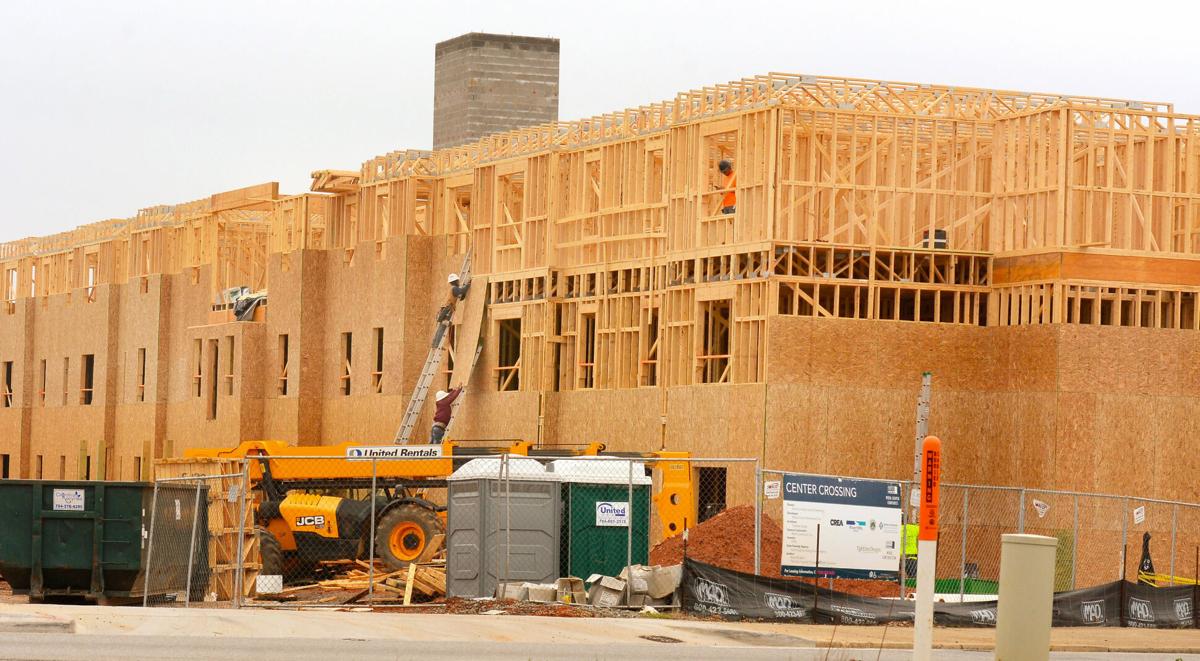 The Center Crossing apartment complex currently under construction is one of several developments going up near the city's bond projects.

The building at 703 Main Avenue SW has stood vacant for at least four years. That will not be the case for much longer.

Atriax Group, an engineering, consulting and construction services firm that currently has offices on Third Avenue NE, is moving into the roughly 11,400-square-foot building that once housed a motorcycle shop.

Bob Sinclair, the director of operations for Atriax, said there were concerns initially about the condition of the building but the property grew on the Atriax team once it was cleaned up.

Sinclair said the presence of the City Walk just across the railroad track was a significant factor in the company’s choice of that site.

He said the bond program showed the community was forward-looking and that it was an important component for drawing young workers to the area.

“Hickory is not always the first destination for young professionals, and we’ve found that over the last year or so that the number of young professionals that are knocking on our door has increased, that we are seeing more people interested in our little town and the amenities that it offers,” Sinclair said.

When Hickory voters went to the polls in 2014 to approve $40 million in city bonds, they did so with the promise of revitalization and growth.

At a recent Hickory City Council meeting, Assistant to the City Manager Yaidee Fox said the city was delivering that growth.

She said the city has already secured $371 million in investment and commitments for 397 housing units.

In addition, the work had created more than 4,400 jobs, more than 1,300 of which Fox described as permanent positions.

A few years ago, the city identified the following economic development goals for the bond program: $500 million in investment, 8,000 additional jobs, 1,750 new housing units and 3,500 more people in the city.

The city wants to achieve or exceed those goals by 2035.

The development touted so far has occurred even as the projects themselves are not yet complete.

The City Walk and Riverwalk are under construction and three other distinct walking and biking paths are in various phases of planning and development.

Taking stock of growthWhen asked to break down $371 million in investment linked to the bond program, the city provided a list of 15 different projects, including Atriax.

The projects listed run the gamut from the Dollar General discount store being built on 10th Street Boulevard NW to the high-dollar expansion of grocery supplier MDI.

Nearly all the projects are located within a mile of one of the planned walking and biking paths or the Trivium Corporate Center.

In addition, at least 11 of the projects received some form of incentives or development assistance from the city, local county governments or both.

Four of the projects — Corning, ITM, Cataler and American Fuji Seal — are manufacturing or distribution businesses locating in the Trivium business park.

Four of the developments are residential or some mix of commercial and residential.

Hickory Communications Specialist Sarah Killian said the 397 units at these four developments are split into 267 market-rate units and 130 affordable apartments.

Affordable units are defined as those that are federally funded and are reserved for people with incomes that are 80 percent or less of the area median income, Killian said.

Two examples of the different types of housing developments are on display just across the railroad tracks from each other near downtown.

Preston Ridge near Trivium and The Lodge in southwest Hickory round out the four housing developments.

By far the most expensive development identified by the city is the $120 million expansion planned by MDI.

Kimberly George, the president of communications and corporate citizenship for MDI, said the city’s bond program with its quality-of-life improvements was one factor in the company’s decision to grow in Hickory.

“What the city is doing to improve the living and the attractiveness of the area definitely makes a difference in choosing this as a location for expansion versus another area,” George said.

Killian said the trail system “will extend across the lake and up to MDI” as part of a future project.

She said the software uses data from government agencies to project employment based on given levels of investment.

She said the economic impact of the bond program goes beyond just the direct development occurring in the areas where the projects themselves are located.

“The investments of the bond program have ripple effects throughout the entire Hickory region,” Killian said. “These efforts not only directly create economic development opportunities; they also enhance quality of life and make our community an attractive place for prospective job hunters, residents and visitors.”

$371 Million in Investment: A Breakdown

A section of one of the 40-ton wooden Hickory arches splintered as workers were preparing to put it in place in April, according to documents …

The Hickory City Council awarded a $20.8 million contract for construction of the city’s Aviation Walk to Neill Grading & Construction Co.…

A controversial 250-unit housing development in Maiden will move forward following approval by the Maiden Town Council on Tuesday.

Workers are in the process of reinforcing the second set of arches that will be placed over the pedestrian bridge that crosses over N.C. 127.

Catawba County’s recommended annual budget would be 25% more than the current budget, but the county property tax rate wouldn’t change under t…

The Maiden Town Council will meet Tuesday to consider a revised proposal for a 250-unit housing development off U.S. 321 Business.

Workers continue construction on the Center Crossing apartment complex on South Center Street. The complex will be located near the City Walk and is one of several developments the city has linked to its bond program.

Bob Sinclair, left, and Simon Lucas of Atriax Group display a rendering of the new Atriax office building. They are standing in front of the building where the company will be relocating. Sinclair said the nearby City Walk was an important factor in the company's choice to locate there.

The Center Crossing apartment complex currently under construction is one of several developments going up near the city's bond projects.