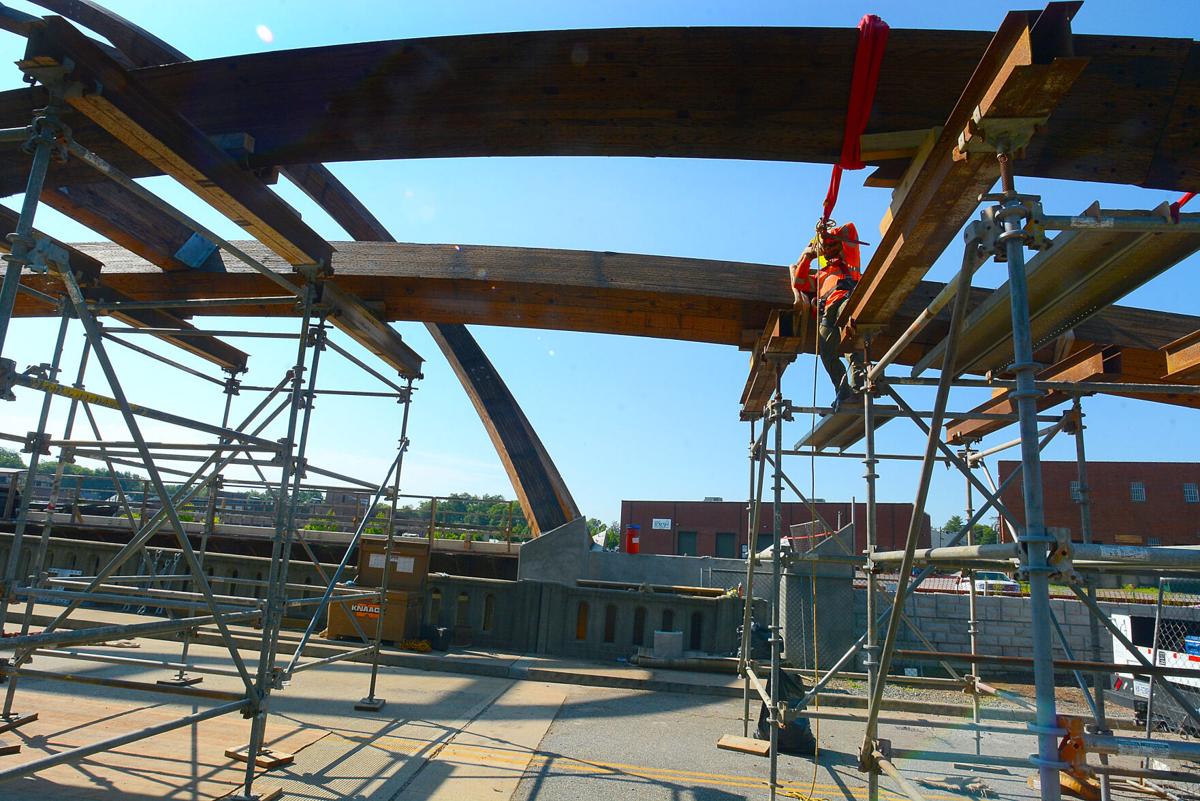 A worker prepares the second set of Hickory arches for installation over the weekend. 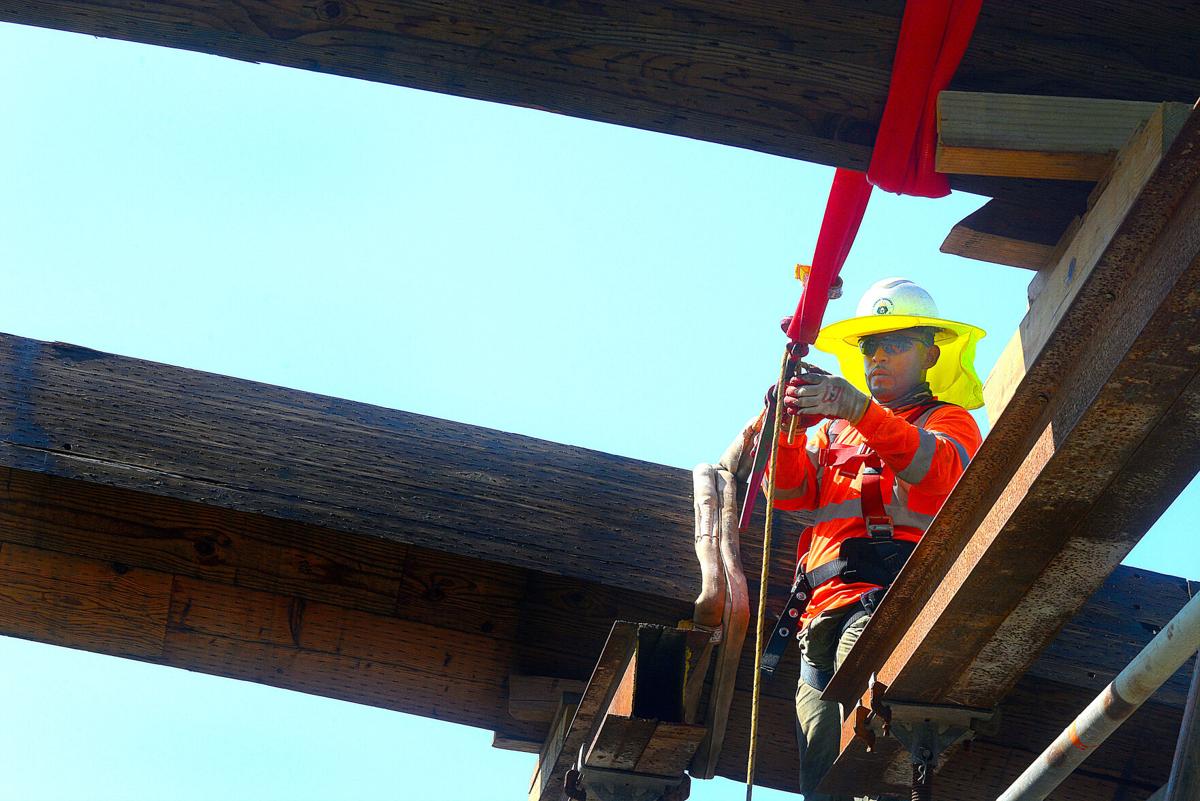 A worker tightens straps on the Hickory arch beams Friday morning. The final arch is schedule to be placed over the weekend. 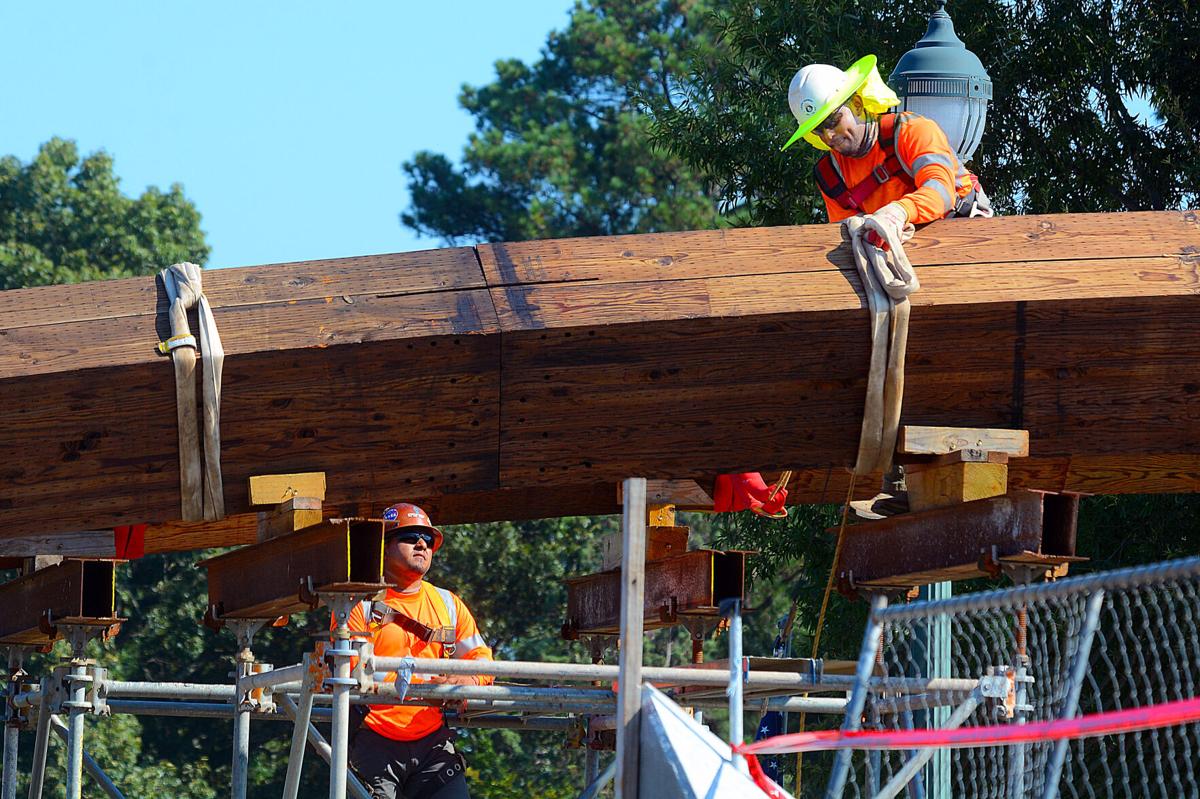 Workers positioned straps Friday on each section of the Hickory arches.

The second set of arches are scheduled to be installed in Hickory over the weekend.

The second Hickory arch is set to go up this weekend, roughly three months after one of the beam’s wooden members splintered and halted the installation.

The work will close the section of N.C. 127 between First Avenue SE and First Avenue NE, according to a release from the city of Hickory. The road will close at 3 a.m. Saturday and is expected to reopen by 6 a.m. Monday.

The arch required a repair that included an adhesive, screws and clamps.

When asked about the safety of the arch, the safety of the repair and specific details on the repair, including what adhesive was used, Hickory Communications Sarah Killian said the contractor or the manufacturer would need to answer those questions.

Neill Grading & Construction Co. is the contractor on the job while Oregon-based Western Wood Structures is the manufacturer.

Western Wood President Paul Gilham said Thursday that an email response to the questions was being prepared.

The arch is an artistic component of the pedestrian bridge, which itself is part of the City Walk.

The City Walk is the walking and biking corridor currently under construction between Lenoir-Rhyne University and downtown Hickory. It is funded through the $40 million bond initiative that passed in 2014.

Neil Grading has a $14.3 million contract with the city for the project. The arches themselves cost around $750,000.

The Hickory City Council agreed to annex and rezone property for a housing project off Short Road and Eller Drive at its meeting Tuesday.

Workers completed installation of the second set of arches over N.C. 127 this past weekend, reaching a milestone in the construction of the Ci…

Where have all the people gone? Expert outlines dire workforce, population trends

The books have closed on filing for city and town elections in Catawba County that will take place later this year.

Catawba County to send out tax bills this week

Conover Mayor Lee Moritz will be leaving the elected position once his term ends later this year.

Competitive races are shaping up in Maiden, Newton and Brookford a week into election filing.

A worker prepares the second set of Hickory arches for installation over the weekend.

A worker tightens straps on the Hickory arch beams Friday morning. The final arch is schedule to be placed over the weekend.

Workers positioned straps Friday on each section of the Hickory arches.

The second set of arches are scheduled to be installed in Hickory over the weekend.