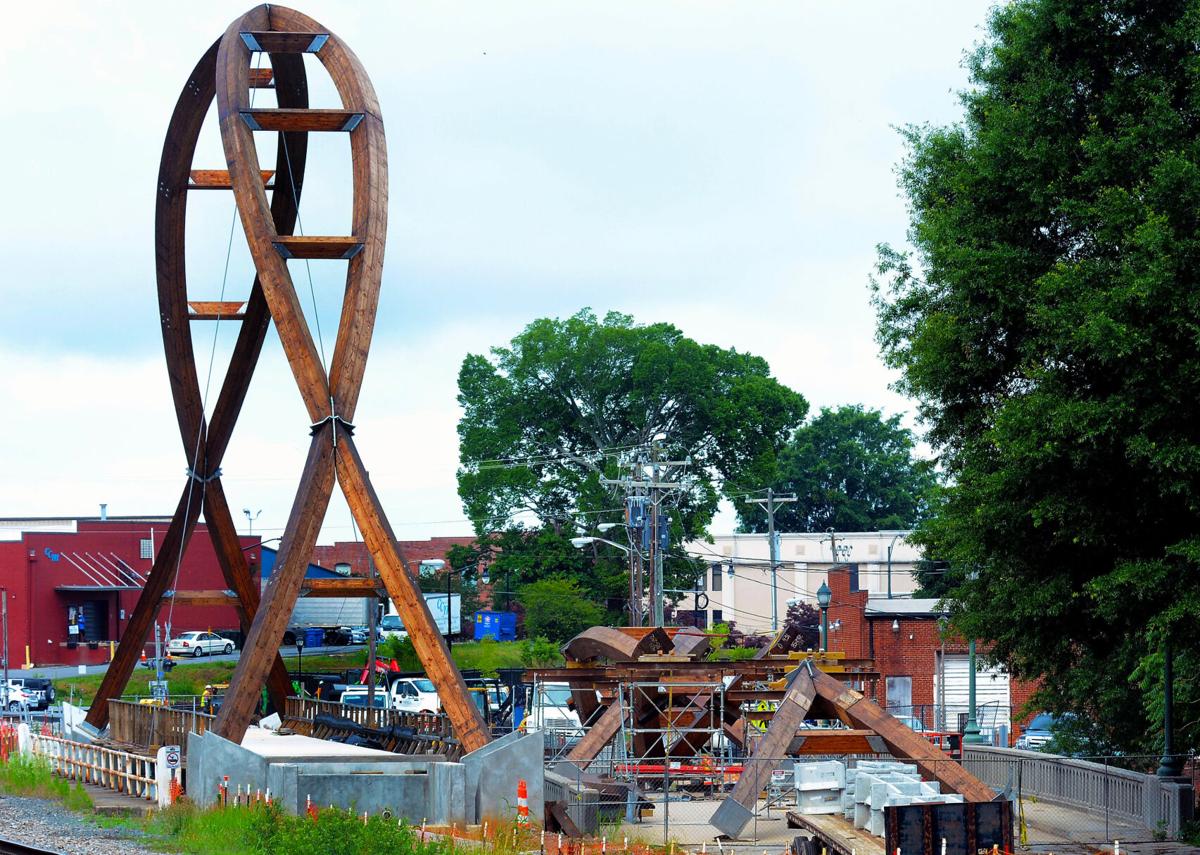 The installation of the second set of arches over N.C. 127 in Hickory has been on hold for nearly two months after part of an arch splintered.

The N.C. Department of Transportation is currently reviewing repair plans for a set of arches that will be placed over N.C. 127 in Hickory. Part of the arch splintered as workers went to lift it in April.

A section of one of the 40-ton wooden Hickory arches splintered as workers were preparing to put it in place in April, according to documents obtained through a public records request.

The arches are a decorative component of the City Walk pedestrian bridge overlooking N.C. 127.

The pedestrian bridge and arches, like the overall City Walk, are part of the bond program that is funded through the $40 million voters approved in 2014, as well as various grants.

The design for the arches themselves was approved years ago by the Bond Implementation Commission and given the final OK by the Hickory City Council.

The arches were manufactured by the Oregon-based company Western Wood Structures. They cost roughly $750,000, accounting for about 5% of the total $14.3 million contract the city awarded to Neill Grading & Construction Co.

The first set of arches was installed in March.

Workers were ready to install the second set of arches the weekend of April 17 but stopped when they heard an unusual sound.

Mayor Hank Guess, speaking on April 20, described it as a popping noise.

On April 21, Western Wood President Paul Gilham went with his jobsite superintendent Rick Anderson to inspect the arch, according to a letter dated May 5 that Gilham sent to Colin Darling of Dane Construction, a company involved in the placement of the arches.

“The damage consisted of a splintering of the members at the lower bolted connection to the (steel assemblies),” Gilham wrote.

The N.C. Department of Transportation is currently reviewing the repair plan, according to the city.

The city did not acknowledge any splintering or cracks in a May 19 news release providing an update on the status of the arches. The closest the release came to describing the condition of the arches was to say they would need reinforcement.

In response to a question about why they did not release more specific information, city leaders said: “We have said it exhibited signs of stress.” The original release made no direct reference to signs of stress.

Hickory Communications Specialist Sarah Killian said the responses from the city to questions about the arches are official statements of the city and are not attributable to any one official.

Hickory City Council members were also apparently not informed about what, exactly, happened with the arches.

Councilman Tony Wood and Councilman David Williams said Wednesday they were not told that part of the arch splintered.

On Thursday, city leaders responded that council members are aware the arch was damaged.

City leaders also said they are not responsible for determining if the manufacturer or any other companies involved with the arches is liable for the damage.

That is up to the contractor, according to the city.

City leaders also have said the city would not be responsible for any additional costs for repairs.

“The city has not taken ownership of the arches,” according to city leaders. “Therefore, any repair costs will be assumed by the contractor.”

City leaders have said they will not assume ownership of the arches until the contractor has met all contractual commitments.

The story behind the story

Reporter Kevin Griffin examined more than 500 printed pages of emails as part of his research for this story.

Toddler takes her first steps thanks to prosthetic legs

Toddler takes her first steps thanks to prosthetic legs

Town with a future? Maiden candidates sound off on housing development, growth

Maiden’s motto, “Town with a future,” is proudly displayed on the official website. But what exactly does the future hold for the town of 3,70…

Early voting begins in Catawba County: What you need to know

Today is the first day of early voting in Catawba County for residents of six municipalities and two school systems.

Hickory council to hold public meeting on redistricting: What you need to know

Early voting in Catawba County got off to a slow start Thursday.

Residents in Newton will see a newcomer on city council regardless of the outcome of this year’s election.

Elections set for Brookford, Catawba; some candidates weigh in on plans

Catawba County’s two smallest towns are among the municipalities with elections this year.

Conover residents will have a new mayor and at least one new member of city council after fall elections conclude.

The installation of the second set of arches over N.C. 127 in Hickory has been on hold for nearly two months after part of an arch splintered.

The N.C. Department of Transportation is currently reviewing repair plans for a set of arches that will be placed over N.C. 127 in Hickory. Part of the arch splintered as workers went to lift it in April.