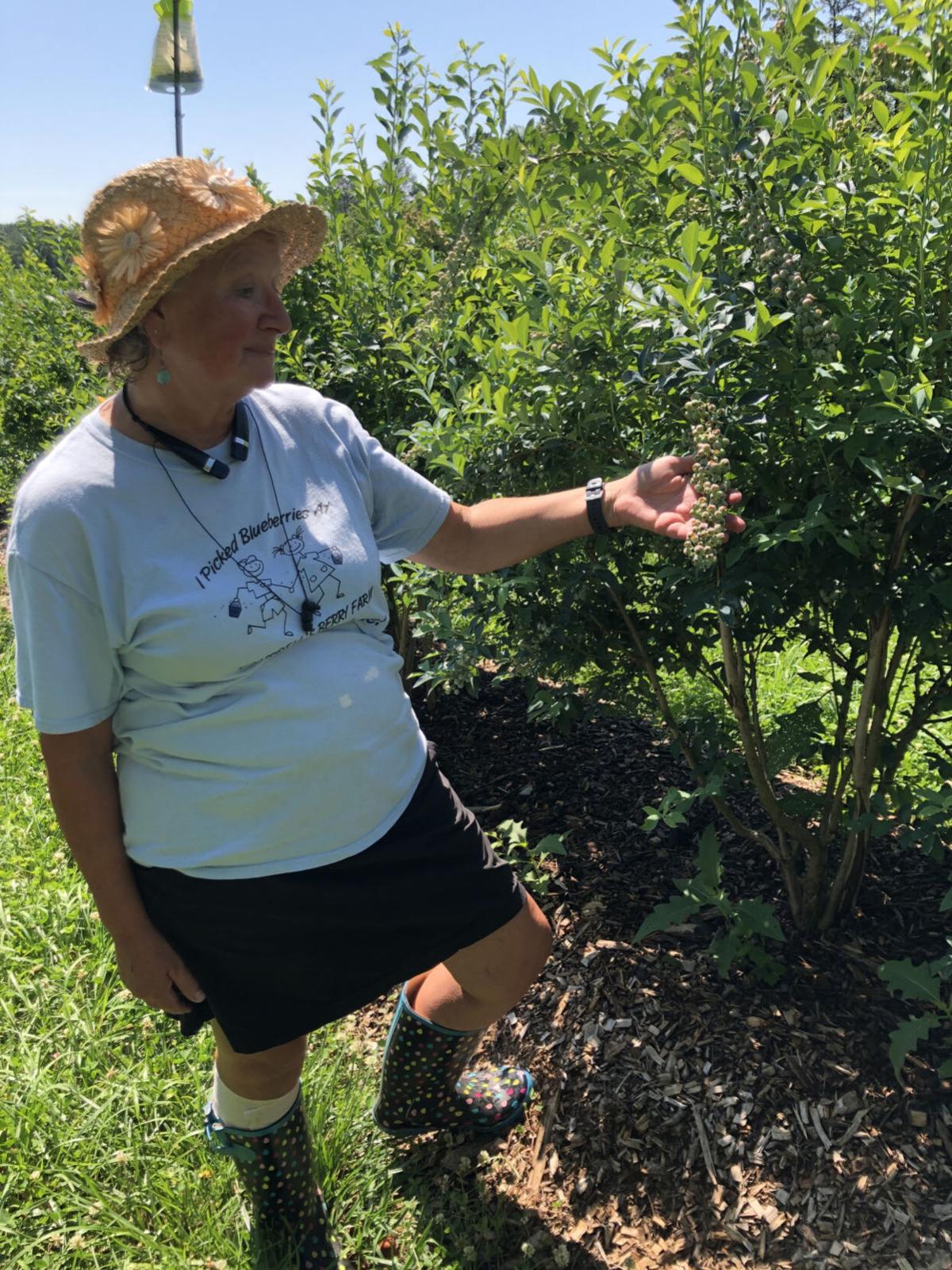 Holly Campbell lifts a bunch of blueberries that hadn’t turned blue yet when this picture was made on June 22. 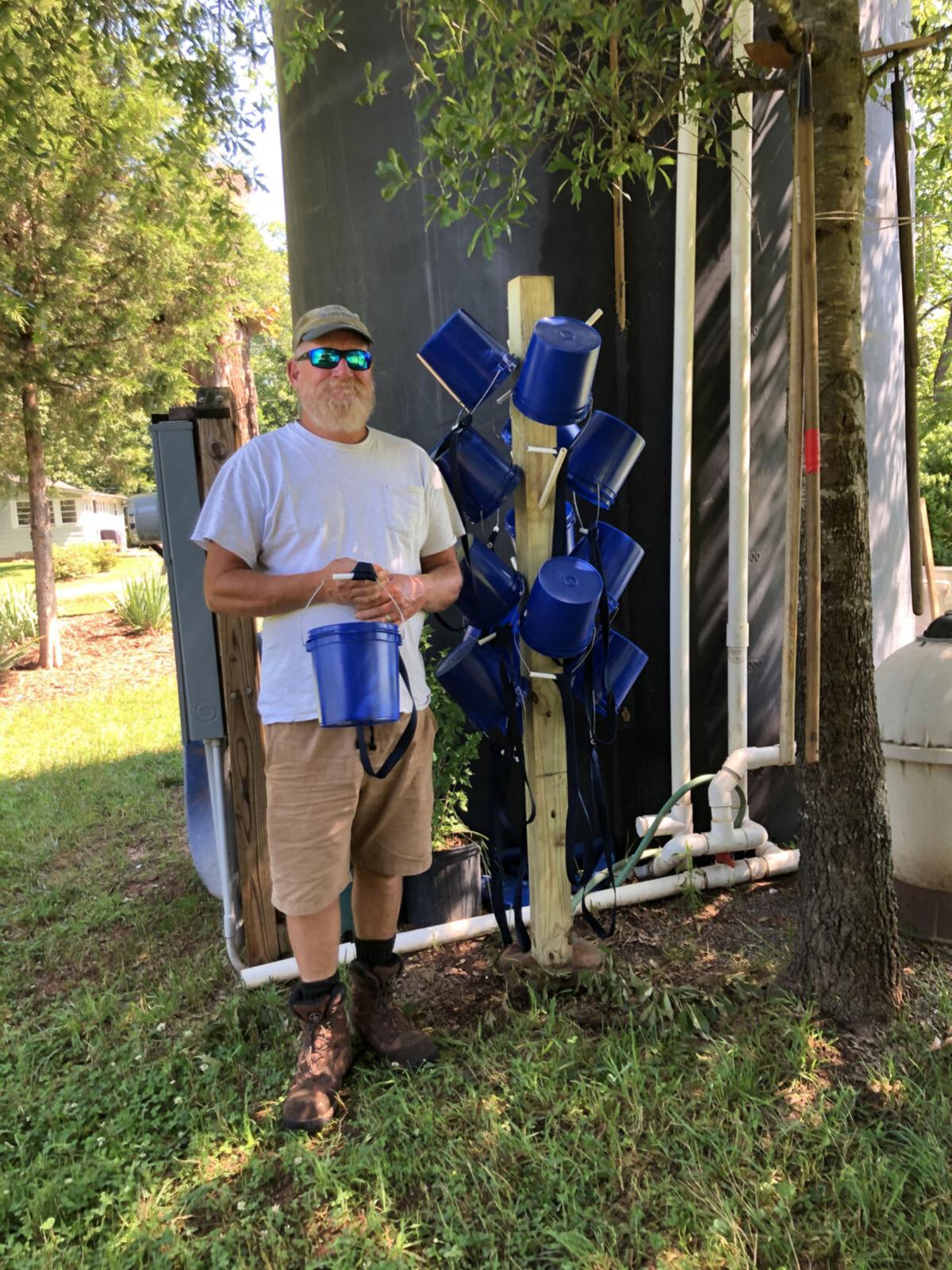 Tracy Campbell stands next to the picking bucket drying rack that he constructed for the 2020 blueberry picking season at Campbells Berry Farm in Bethlehem. 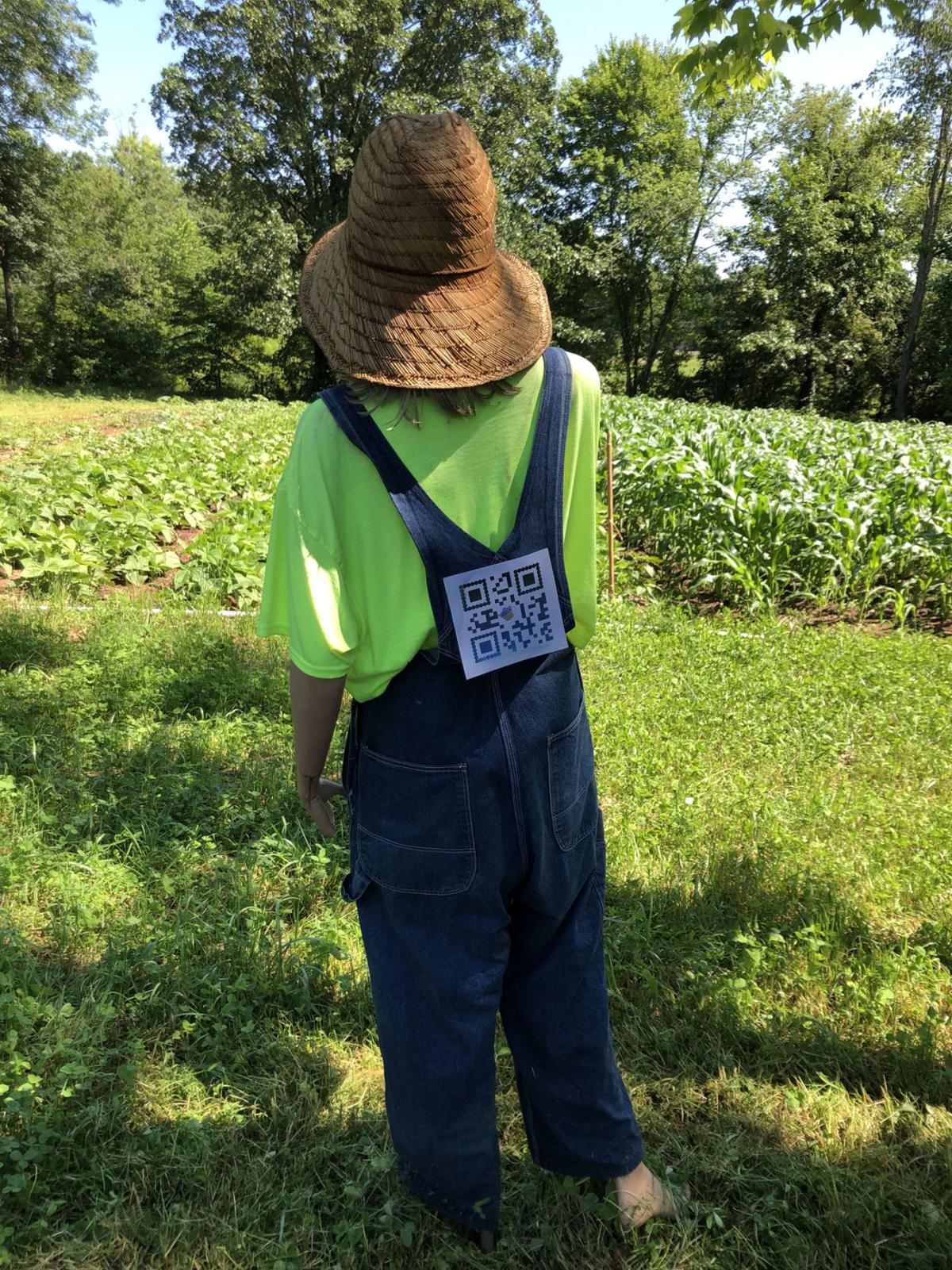 Tracy and Holly Campbells’ lady scarecrow looks like an actual person standing watch over one of the Campbells’ vegetable gardens. On her back is a QR code so people can use their iPhones for the answer to a scavenger hunt question. 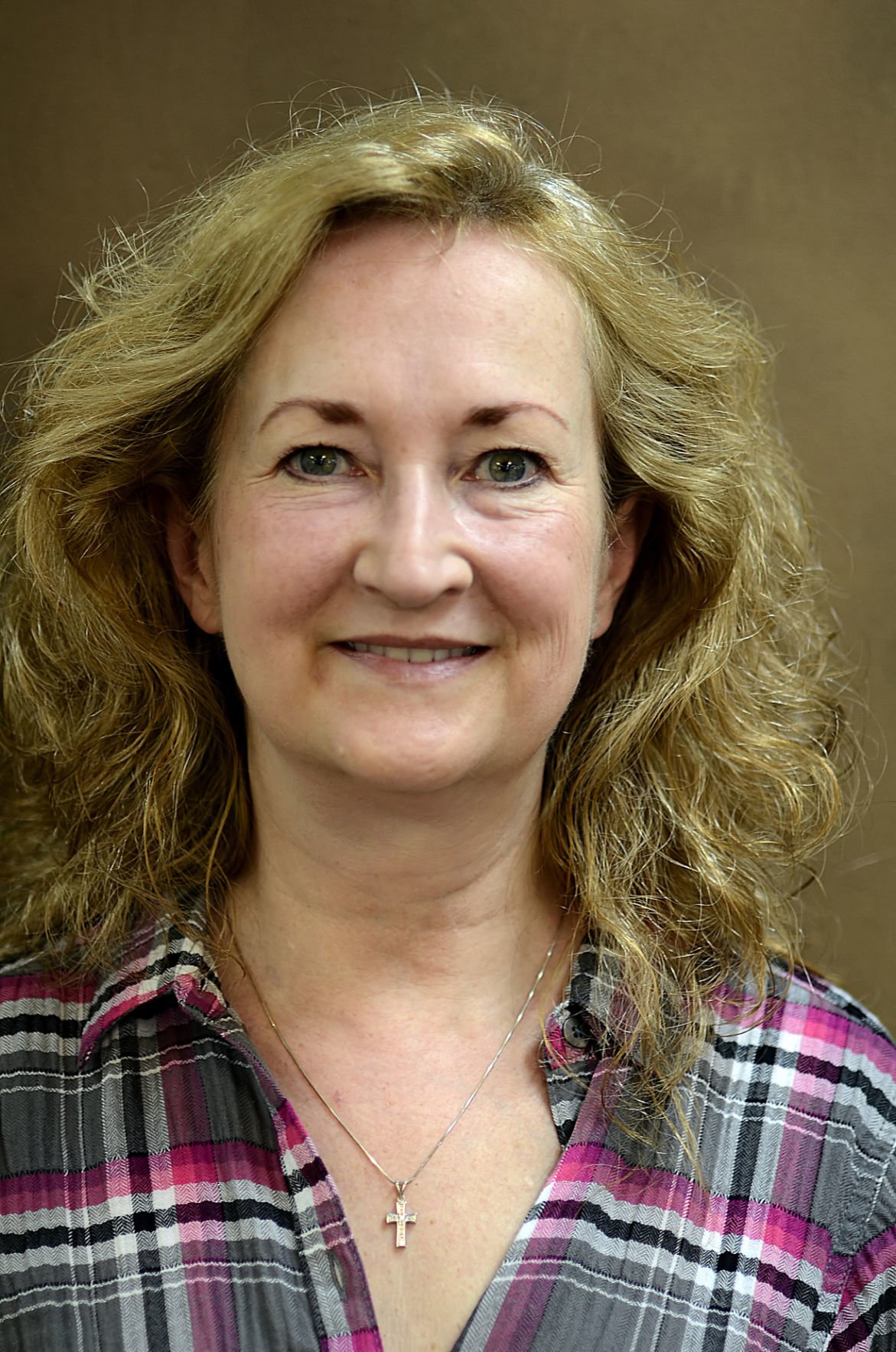 “The bushes are green. The berries are blue. How many blueberry bushes are here for you?”

That’s one of five questions on Campbells Berry Farm’s scavenger hunt. As kids — and grown-ups, too — work their way around the Bethlehem you-pick farm, looking for answers, they learn fun facts.

In addition to finding out that berry farm owners Holly and Tracy Campbell care for 2,700 blueberry bushes, scavenger hunt players discover that the farm has five varieties of bushes, that each bush was about the size of a pencil when the Campbells planted it, and that blueberries are superfoods in terms of nutritional value.

My favorite clue reads as follows: “One of our staff members is pretty stiff. She is a hard worker, always working a 24-hour shift. She protects the crops from munching birds and deer, but she is people friendly, so don’t you fear.” You probably guessed that the staff member in question is a scarecrow, but I can pretty much guarantee you’ve never seen one like her. Until you get up close, you think you’re looking at the back of a woman standing near one of the Campbells’ vegetable fields from which all sorts of veggies are harvested and sold in the Campbells’ farm stand.

This is my second story about the Campbells’ farm. When I heard about the place last year, it was the end of the season, so I concentrated on how Tracy, a former house-builder turned charter-fishing-boat-owner and captain, and Holly, who used to work as a chiropractic assistant, met, married, and in middle age became Alexander County blueberry farmers. This time, we talked more about the farm, which is in its third year.

The Campbells want people to know that, yes, they are open for business. Because of COVID-19, people have been calling to find out if picking blueberries and buying produce are activities one can do this summer.

We talked June 22. The sun was shining, which was unusual considering how many days of rain the Catawba Valley had in the spring, so much water that Tracy joked about “taters” being available for sale later in the season “if they don’t float away.” With so little sun, the blueberries weren’t blue yet, and none of the vegetables — save a couple of squashes — were ready to be picked. I found out a week or so later that the sun had done its thing, and the Campbells were open for blueberry picking, selling vegetables, and scooping up hand-dipped ice cream.

As suggested by the scavenger hunt, the Campbells are as much about education and being there for families as selling blueberries. They welcome day camps, families, and individuals. Of course, the 2020 season may not be one during which Tracy and Holly entertain many large groups. The virus has had its impact on the blueberry farm as it has on just about every other aspect of human life. “To address the situation,” as Holly put it, the Campbells have been working with Alexander County Cooperative Extension director Lenny Rogers and his wife Elena Rogers, a certified Produce Safety Alliance trainer who works for the state extension office and offers all sorts of help and suggestions, including information from the Centers for Disease Control and Prevention and the United States Department of Agriculture.

“They’ve gone over our protocol and helped us institute additional safety measures, such as sanitizing the picking buckets after each use,” said Holly, pointing to the new bucket-drying rack that Tracy built. Holly said they were informed that “the possibility of catching the virus from berries and vegetables is very unlikely.”

“It can’t survive on the produce,” Tracy added.

The farm offers an area for newly arrived customers to wait for instructions, and there are flags “to indicate six feet apart,” said Holly, who shared that they’re limiting the number of people who enter the farm stand where the blueberries are weighed and produce, ice cream, jam, and so forth are sold. To promote air circulation, fans are in operation in the building, and surfaces, including those within the portable restroom, are cleaned according to a suggested procedure.

“It’s probably safer here than going to the grocery store,” Holly pointed out.

Blueberry season usually runs six to eight weeks, concluding the first week in August. The Campbells do the final picking and then freeze the berries to sell through the winter.

When Tracy and Holly aren’t working their farm, they’re busy writing grants. They received one recently from NC State Extension’s NC AgVentures. With it, the couple purchased a freeze dryer, which they’ll use to dry berries and sell. “A good, healthy snack for everyone,” said Holly, “especially hikers and children. The dried berries are also good to use in smoothies.” Holly pointed out that freeze-dried blueberries have a shelf life of 15 to 25 years and retain nearly all the nutrients of the fresh fruit.

Tracy shared some interesting ways other farmers have benefited from AgVentures, such as the guy who needed a mobile head gate for his cattle. He wanted to take the device to the animals in the pastures rather than having to herd them to the barn when they needed to be vaccinated and so forth.

And there was the woman who wanted head guards for her goats so she could put the animals in her apple orchards to clean up under the trees without the goats eating the fruit off of them.

“The trick to it is the innovative part,” said Tracy, “something no one or few people are using.” He said he’d like to “figure a way for a machine to mow rows on its own.” Such machines exist, Tracy offered, but they’re designed for yards. “They need to be redesigned and affordable for farmers so rows (between crops) are mowed on their own, and farmers can do other work.”

Another grant the Campbells secured has “improved our produce and fruit-cooling room,” said Holly, explaining that the grant partially helped them buy a much larger air conditioner than the one they’d been using. “It can get to 90 or 100 degrees in the farm stand,” Holly pointed out, saying it’s imperative that produce be cooled as quickly as possible after it’s harvested.

So, for pick-your-own blueberries, homegrown vegetables, ice cream, and fun lessons in farming — all in a safe environment, head to Campbells Berry Farm at 27 Tracy Bolick Lane, Bethlehem. Hours are 7 a.m. to 7 p.m. Monday through Saturday, 1-6 p.m. on Sundays. For more information, find them on Facebook or Instagram, email campbellsberryfarm@gmail.com, or call 828-598-0707.

Are marks left on vehicles linked to sex trafficking? Probably not but Hickory police are investigating

The Hickory Police Department is investigating strange markings that were found on vehicles in Hickory. The marks have been the subject of rum…

One man dies in shooting at a Hickory apartment

A Hickory man died from injuries he sustained in an early morning shooting in Hickory on Sunday. Another man was also injured.

Zeus the dog was lost after a car accident that killed his owner on Monday. Melanie Wilder, a volunteer with Hartman’s Haven Dog Rescue, went …

A woman was arrested for indecent liberties with a minor after an investigation by the Iredell County Sheriff’s Office Special Victims Unit.

There were 26 new coronavirus cases reported in Catawba County on Friday.

Holly Campbell lifts a bunch of blueberries that hadn’t turned blue yet when this picture was made on June 22.

Tracy Campbell stands next to the picking bucket drying rack that he constructed for the 2020 blueberry picking season at Campbells Berry Farm in Bethlehem.

Tracy and Holly Campbells’ lady scarecrow looks like an actual person standing watch over one of the Campbells’ vegetable gardens. On her back is a QR code so people can use their iPhones for the answer to a scavenger hunt question.