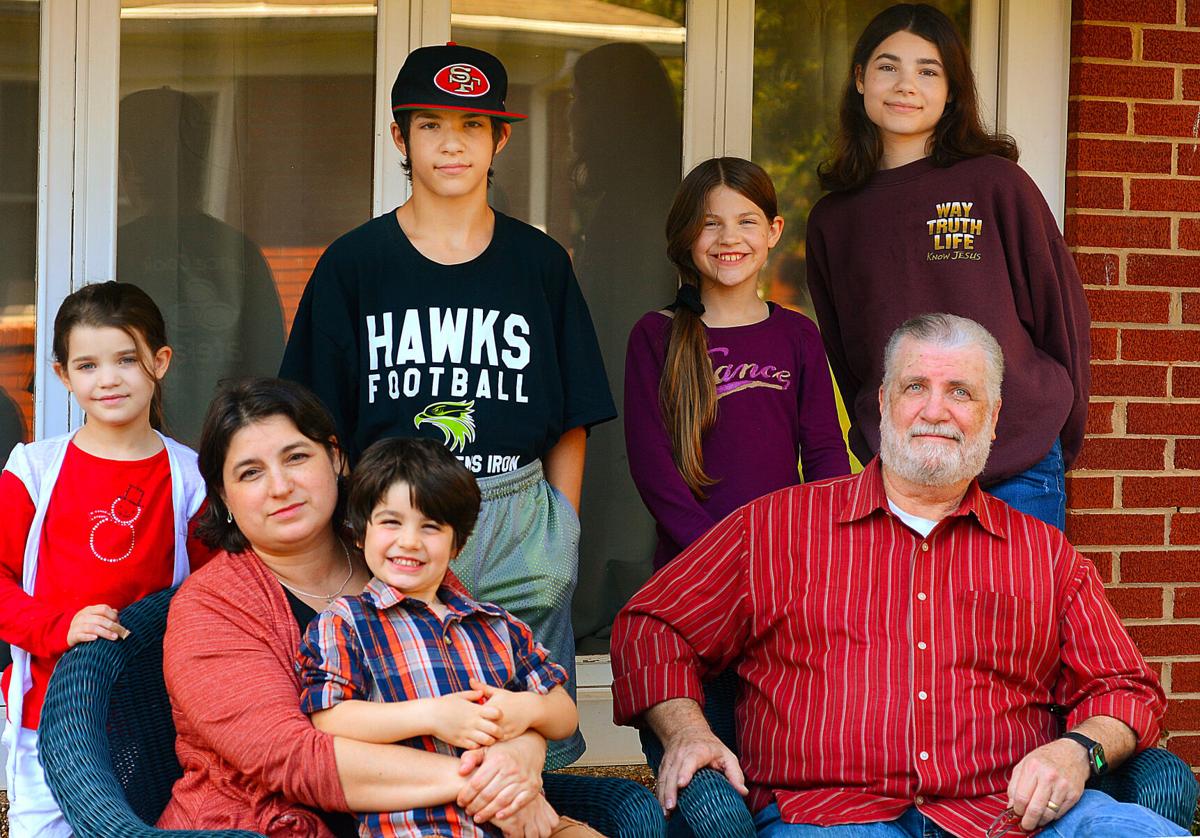 The Frierson family in Claremont, a family with parents and six children living in the house, all contracted COVID-19 in July. From left, bottom row, mother Jessica, 6-year-old Benjamin, and father Ernie. Top row: Havilah, 8, Ethan, 13, Evalynne, 10, and Elise, 15. Not pictured: Isaac, 17. 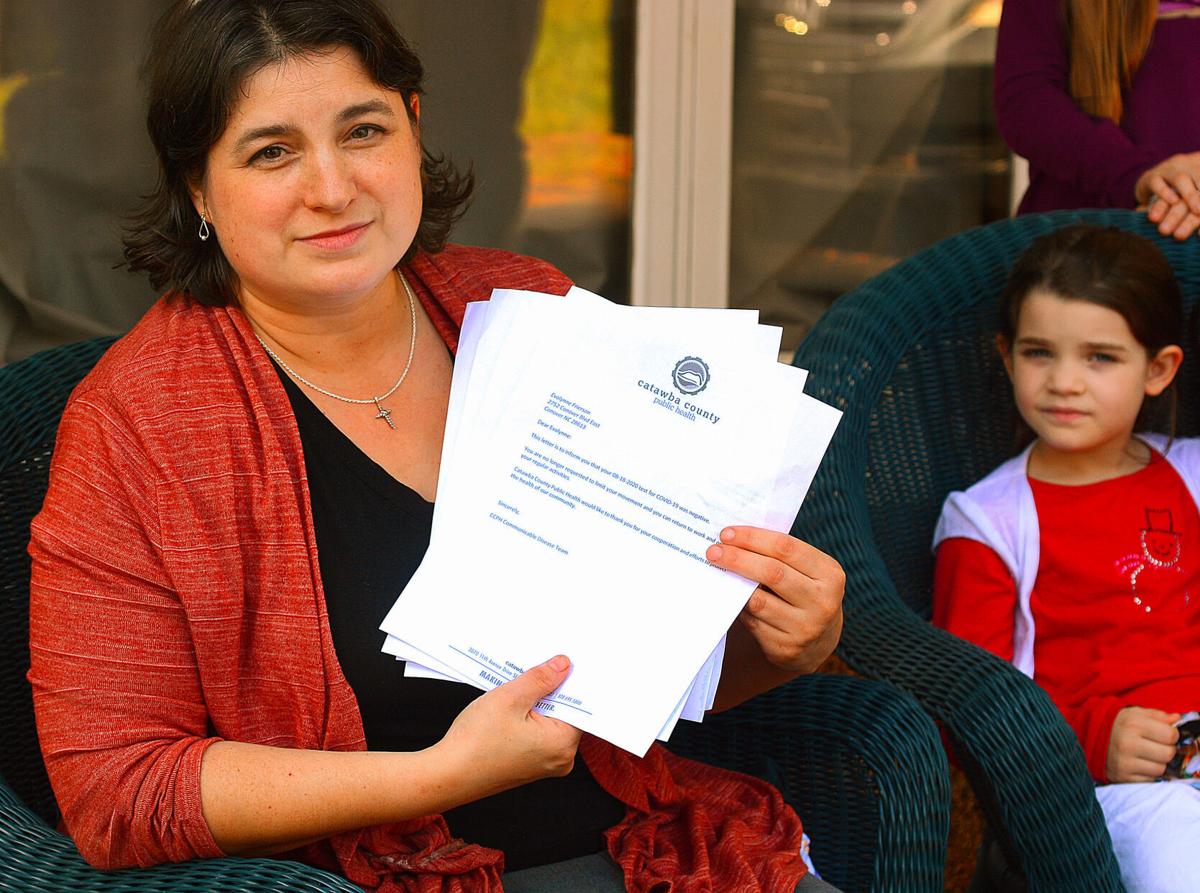 Jessica Frierson holds her family’s COVID-19 negative test results from Catawba County Public Health as her daughter Havilah looks on. The family of eight all had COVID-19 and made sure to test negative before coming out of quarantine.

When Jessica Frierson talks, she wheezes and coughs. She can’t hold a conversation for long — after a few minutes she’s out of breath.

She’s endured pain in her joints, tightness in her chest, and a pounding heartbeat when she stands up. She’s had trouble coming up with words as simple as "shampoo." When she tried to tell her son to put a lid on a pot, she stumbled through the sentence; “Pid the pod; put the pod; lut, put," she said.

Her husband Ernie and the six children who live with her in Claremont have not fared much better.

It’s been nearly five months since the family contracted COVID-19, one after the other starting in July. Before the virus, they were healthy and strong. Today, they are still feeling the detrimental effects on their mental, physical and financial well-being. “We have never gone through such a challenging and frightening time,” Frierson said.

Frierson is a mother of 10. Six of the children still live at home. She homeschools them, so they normally spend their days together learning and playing. They were together when the first sign of COVID-19 appeared.

In late June, when the dust storms from the Sahara were over North Carolina, Frierson and her family were building a storage building when her 10-year-old daughter Evalynne complained of a sore throat and congestion. Frierson thought it was just the dust.

In the coming days it became clear Evalynne was sick — she had headaches, stomach pains and fatigue so severe she couldn’t pedal her bike, Frierson said. "My legs won't work, Mama,” her daughter would say.

Soon after, the family found out they had been exposed to the coronavirus. Over the next two weeks, each got sick.

Her children, including Havilah, 8, Ethan, 13, Elise, 15, and Isaac, 17, had symptoms ranging from a sore throat and a rash to vomiting, fevers and headaches.

Her 4-year-old son Benjamin experienced severe pain, seemingly all over. “(He) would lay on the floor and sob, yelling, ‘It hurts, Mama, it hurts,’” Frierson said. “But he couldn't tell me what hurt. Even three weeks later, he would seem to be feeling better and playing normally, then go lay on his bed and send someone to get me, wanting me to stay beside him because he felt so bad.”

Her older children lost their sense of taste and smell along with the other symptoms. Their illnesses caused weight loss they’re still recovering from.

By July 24 the entire family tested positive for COVID-19.

Frierson and her husband Ernie were the last in the family to contract the virus but ended up with the worst of it.

After 10 days of pain, vomiting and diarrhea, Ernie went to the emergency room, where a doctor said his lungs sounded “crystal clear,” Frierson said. The next day he was admitted with bilateral pneumonia and was hospitalized for seven days. His lungs were severely damaged by the coronavirus, doctors found. His recovery was touch and go.

Two days after Ernie returned home, Frierson began to worry she, too, had pneumonia. Doctors found much worse, she said.

After the doctor evaluated her in the hospital and said she likely had pneumonia, he still seemed unsure, Frierson said. The doctor consulted with another doctor, then sent her for a scan.

"When they got the results, he was somber," Frierson said. "The nurse was holding my hand and teary-eyed." She had multiple blood clots in her lungs, including a mass large enough to cause constant pain in her side, like a cramp. Her right lung had also partially collapsed. If they hadn't caught it, a clot could have stopped her heart.

Her recovery is slow. She can’t take deep breaths, she can’t walk very far and she can’t talk long enough to teach her children.

“My lungs have been damaged from the blood clots, and I have also had some lingering cardiac and neurological effects,” she said. “We had moved to our new home shortly before contracting coronavirus and had not even unpacked everything to get settled in. I am still unable to do anything more than very light housework and some days cannot even do that, so we are dodging boxes and trying to find things still.”

The damage may be permanent to some areas of her lungs, she said. “There is just dead lung tissue in there, to my understanding,” Frierson said.

Her children are still recovering, too. All are thin and easily fatigued, she said. They are working to build back their strength with food, vitamins and exercise.

Her 17-year-old son Isaac, who plays football, is facing neurological and physical issues as well. “(He) looked like he had been shrunk due to losing all his muscle mass and 15 pounds of weight,” she said.

Evalynne, who showed the first symptoms, still struggles to swallow solid food, Frierson said. She’s been to Brenner’s Children’s Hospital at Wake Forest Baptist Medical Center several times. She was diagnosed with post-COVID inflammatory syndrome, Frierson said. One doctor suggested her thyroid may be enlarged and crushing her esophagus, stopping her from being able to swallow. They are still searching for answers.

Just getting in to see a doctor was a struggle, Frierson said. Many wouldn’t see them when they still had symptoms. And the symptoms dragged on, even after testing negative, she said.

“The other challenge has been the stigma of having had COVID,” she said. “Everyone is afraid to be near you. … The worst has actually come from the medical community. It has been difficult for me to get doctor's appointments for my follow-up care.”

When they finally got appointments, doctors often didn’t know what to do because this coronavirus is so new, she said.

The more than six emergency room visits, dozens of urgent care visits and many primary care and specialist appointments are piling up – and it still may be many months before they all recover, Frierson said.

Her husband and children are covered by Medicaid, she said. Frierson is uninsured. With no insurance, she hopes hospitals write off her bills, but she is unable to afford appointments with specialists. “I have many thousands of dollars of bills that will probably be written off by the hospital, but I haven't been able to see the pulmonologist or other specialists I need,” she said.

Aside from physical pain, she aches most over the effect COVID-19 had on her children’s lives. They didn’t leave the house for months and learned to care for each other, she said.

“My household was run by three teenagers as their parents were either in the hospital or on bed rest at home,” Frierson said. “The hardest thing for me was concern for my children who I was too sick to care for.”

As her family suffered the virus, they found support in their home-schooling community, who dropped off meals every evening, she said. Friends and family picked up their groceries.

As Frierson has recovered slowly, she’s been able to help with their school more. Her children bring her their books and she helps as they read. They also found videos online for lessons she can no longer teach.

In some ways, the coronavirus has brought her family closer than ever, she said. “We have focused on finding joy in simple things when sickness released us from all the business of normal life,” Frierson said. “When it was all I could do to sit up and my daughter couldn't walk, the others would take us outside to our patio table where we would all practice watercolor drawing.”

Other times, they clambered onto one bed to watch a movie together or sat and talked.

The entire experience has been surreal, Frierson said. Before July, her family was cautious but the daily COVID-19 numbers didn’t seem like a big deal. “We have been blessed with good health and are rarely sick,” Frierson said. “When coronavirus first arrived at my door, I geared up to beat it and move on. I was unprepared for the ferocity of it.”

Frierson joined a study, so doctors can learn about COVID-19’s long-term impacts. She hopes friends, family and strangers learn from her experience, as well.

As of Wednesday, about eight months since the first confirmed COVID-19 case was reported in Catawba County, there have been 6,618 cases of the virus in the county. While the numbers reported by Catawba County Public Health only represent cases confirmed by a laboratory test, they show about 4.1 percent of the county’s population have had the virus. Of those cases, about 83 percent are considered recovered, but effects of the virus can linger for weeks.

There are 12 active COVID-19 outbreaks in long-term care and group living settings.

Nothing is more refreshing to the ears when you attend a church service or concert than to hear the voices clearly though the microphone.

Lindsay Brooke Shafer’s mermaid tail glints in the sun. It weighs 20 pounds, but she can flick it around and glide through the water effortles…

People looking to get the COVID-19 vaccine can schedule appointments online through a new Catawba County website.

The Frierson family in Claremont, a family with parents and six children living in the house, all contracted COVID-19 in July. From left, bottom row, mother Jessica, 6-year-old Benjamin, and father Ernie. Top row: Havilah, 8, Ethan, 13, Evalynne, 10, and Elise, 15. Not pictured: Isaac, 17.

Jessica Frierson holds her family’s COVID-19 negative test results from Catawba County Public Health as her daughter Havilah looks on. The family of eight all had COVID-19 and made sure to test negative before coming out of quarantine.