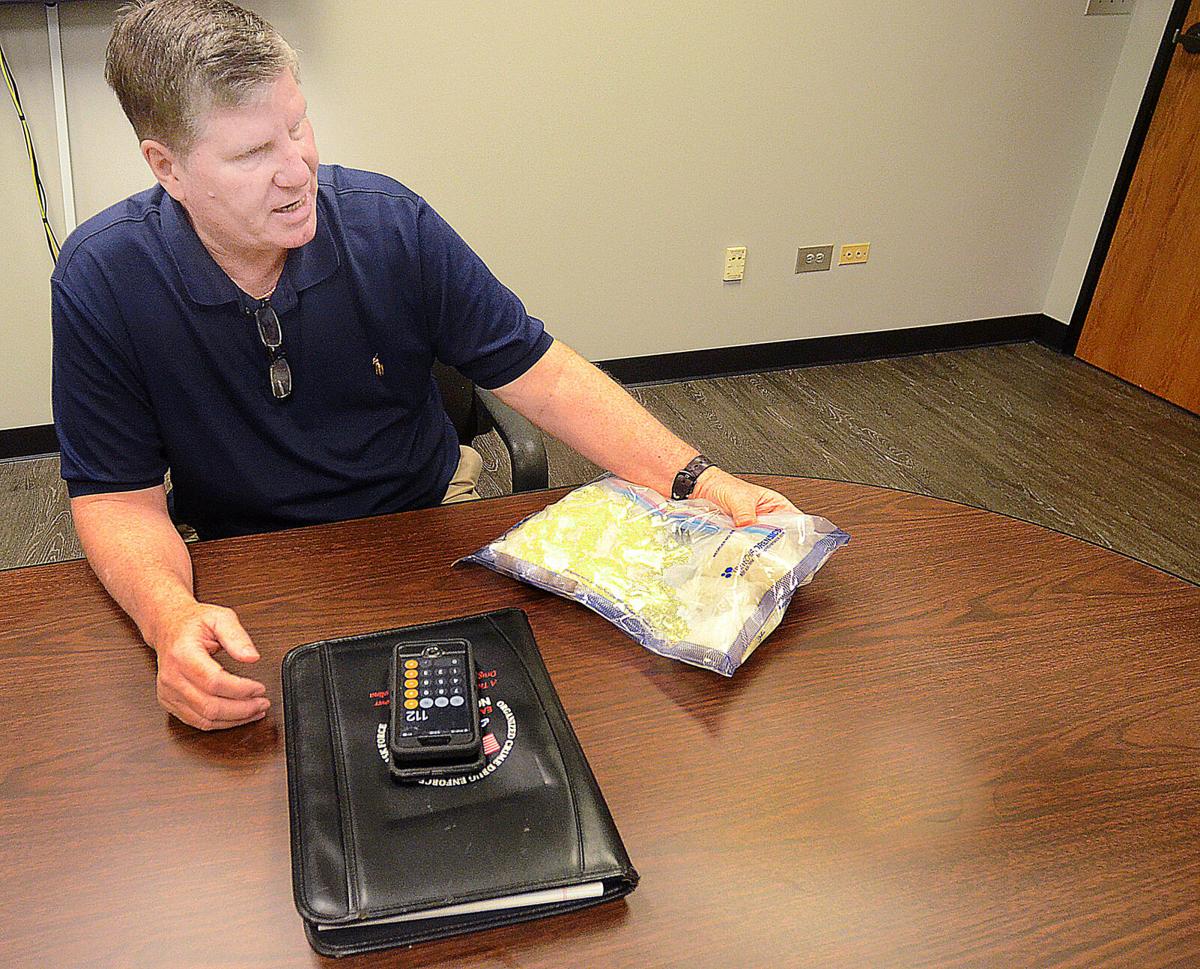 Lt. Jeff Eddins with the Catawba County Sheriff's Office Narcotics Division discusses how the office conducts drug investigations as he displays an evidence bag of meth. 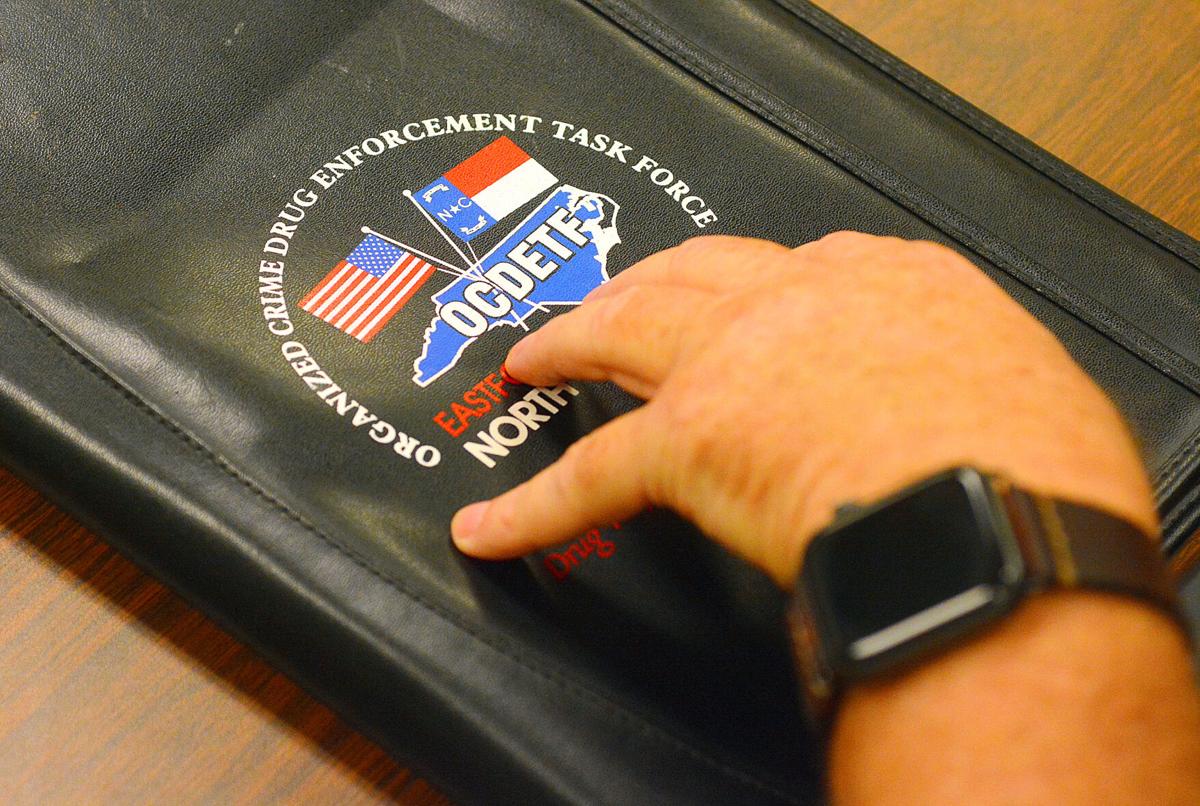 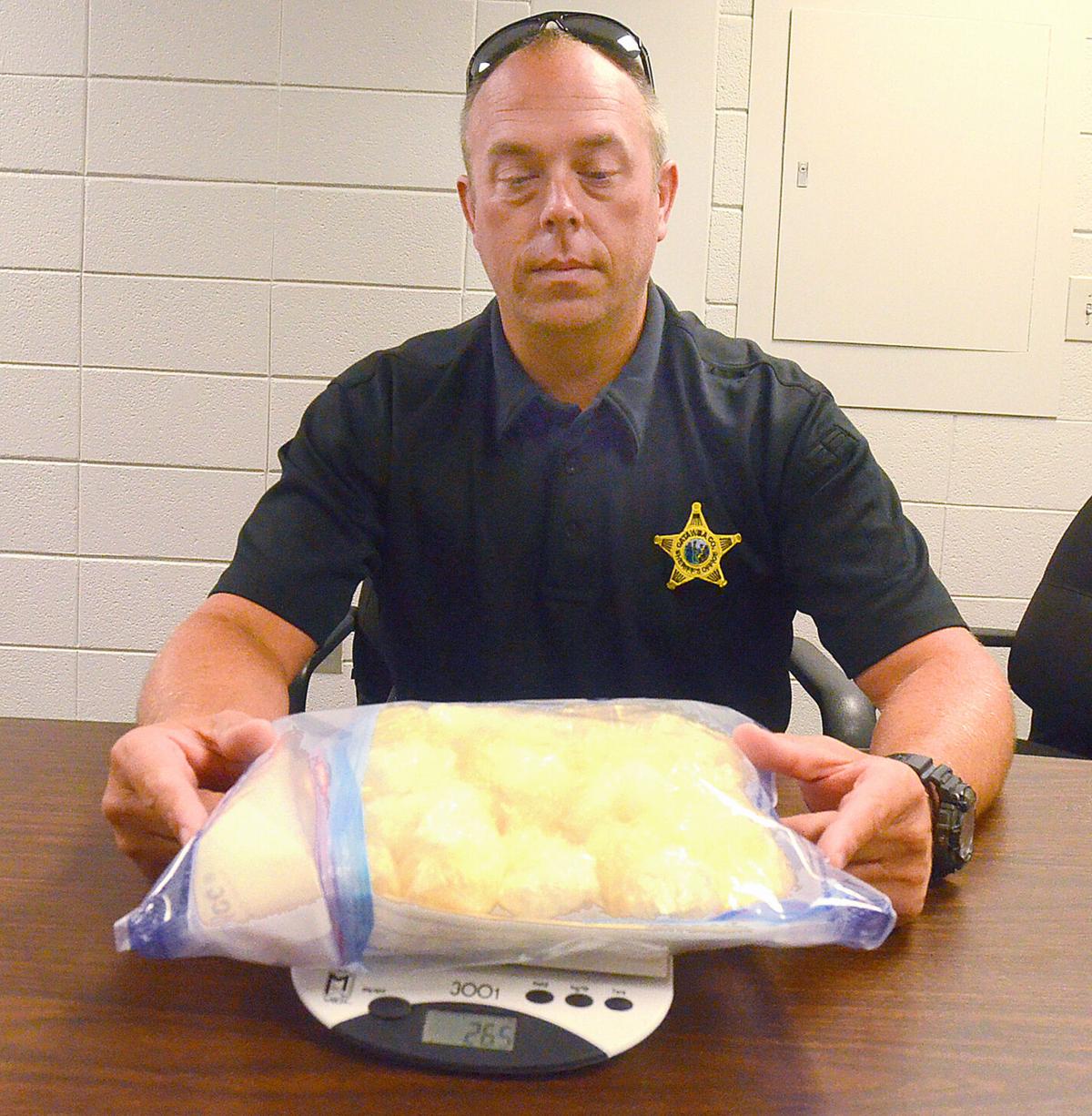 Emergency workers in Catawba County were called out to a drug overdose earlier this year. The team revived the patient with Narcan, a drug used to treat opioid overdoses. Then, the responders walked outside and found the patient’s spouse had overdosed as well.

“(The spouse) injected themselves and overdosed at the very same time,” Catawba County Sheriff’s Office Lt. Jeff Eddins said. “It’s just hard to believe the strength of their addiction.”

Between 2019 and 2020 there were 566 calls for overdoses in Catawba County, Eddins said. The Catawba County Sheriff’s Office responded to 81 of them.

Eddins, who leads the sheriff’s office’s narcotics division, said investigators are focused on finding the drug traffickers behind overdoses, not necessarily drug users themselves.

“If we have an overdose death, or just an overdose, and we respond to it, then we start doing an investigation on who provided the substance right away,” Eddins said. “Those are difficult cases to investigate, because the victim is either dead or has just been revived and is unwilling to reveal who their source is. But that’s not to say we are not going to make the effort to do it.”

The narcotics division at the sheriff’s office is typically investigating nine or 10 cases at any point in time. Some cases are connected through a larger distributor, Eddins said.

The most common drugs found in Catawba County are methamphetamine, heroin, fentanyl and marijuana, Eddins said. Counterfeit pills are also common. A pill may be labeled Xanax and actually be fentanyl.

“Those are pretty dangerous. People think they are taking an FDA-approved pharmaceutical brand drug when it’s actually not,” Eddins said.

“No one regulates the quality of your heroin,” he said. “You’re playing Russian roulette every time you stick it in your arm.”

Nine investigators and officers work in the narcotics division at the sheriff’s office. There are four narcotics officers, four special enforcement group officers, and Eddins. Some of those officers include plainclothes officers, who blend in when doing surveillance. For Catawba County’s 160,000 residents, there is one narcotics officer per 17,000 people, Eddins said.

At the start of a narcotics investigation, members of the division make a list of the top five targets. “We start to do whatever investigating we can into those targets through informants, surveillance, electronic records; we do all those things targeting that drug trafficker,” Eddins said

A long-term investigation can take months or years to complete. Those are typically federal investigations, he said. The team has worked cases from North Carolina to California.

The sheriff’s office regularly collaborates with other local offices as well as the state and federal investigators.

Most of the drugs in Catawba County come from Atlanta, Georgia, Eddins said. Part of the reason is because there are labs in Atlanta that can take meth in a liquid form and finish the manufacturing process.

Labs in Catawba County used to be more common, but it’s cheaper now to traffic it from labs in other cities, Eddins said.

“I’m not saying there’s not labs here. I’m saying whoever’s doing it is spending a whole lot more on that methamphetamine than buying it,” he said.

When investigators locate a drug trafficker, they don’t immediately make an arrest and close the case. They wait to find out where the trafficker is getting their supply.

“So how is he getting those drugs in? And how is he distributing them throughout the community?” he said. “We can take one out or we can take 10 out. We’d rather take 10.

“We always want to do all we can do to get the most people, the most return, on an investigation,” Eddins said. “There are hundreds of man-hours in these investigations and we just don’t want to do all that just for one person. We want to disrupt, dismantle and prosecute drug trafficking organizations.”

“We don’t make them a deal on our end,” Capt. Aaron Turk with the sheriff’s office said. “We tell them that the court will be informed of their cooperation.”

Dealers will sell to anyone who is not a police officer, Eddins said. “Anybody that will buy, as long as they aren’t wearing a badge or driving a marked car — they’re pretty much open to selling to you,” he said. “They take the risk. They have to be lucky every day to make sure they haven’t sold to an informant. That’s the fear they have to live with.”

The sheriff’s office gets help from informants for a variety of reasons. Some informants are paid, some call out of a sense of community responsibility, others want to eliminate rival drug traffickers or want revenge, Eddins said.

Investigators assess the motives for the tips they receive.

“We get a ton of people saying, ‘I just separated from my husband and he’s got a large amount of this,’” Eddins said. “You have to think, with a little grain of salt, ‘Is that true?’”

The internet and prepaid debit cards have made the job of a narcotics investigator more difficult, according to Eddins. Drug traffickers today have more avenues than ever before.

“These things become much more technical for us and slow us down, because now we don’t find money in a big bag as much anymore, we find Green Dot cards,” Eddins said.

In response, the sheriff’s office has become more sophisticated with technology. “We have purchased a lot of electronics here, a lot of things that help us do data analysis,” he said.

Since 2019, the state court has a 99.8% conviction rate and 100% in federal court for drug cases put forth by the Catawba County Sheriff’s Office, Eddins said. “Even the ones that were dismissed were because one died, two were plea agreements, one was a deferred prosecution and one the lab came back with no controlled substance.”

“In our business, you have to be content with delayed gratification, because all the work that you’re doing doesn’t get noticed for lots of reasons,” he said.

Help from the public can play a role in moving an investigation along, he said.

“I can’t understate how important it is for the public to call us,” Eddins said. “It’s imperative that the public cooperates with us and makes those calls.”

Anyone with information related to illegal drugs and drug trafficking can call 828-466-2847.

Tony Allen Brittain II, 49, of Claremont was sentenced to a minimum of nine years in prison for the death of Kevin Ray Hefner, 28, after plead…

Lt. Jeff Eddins with the Catawba County Sheriff's Office Narcotics Division discusses how the office conducts drug investigations as he displays an evidence bag of meth.