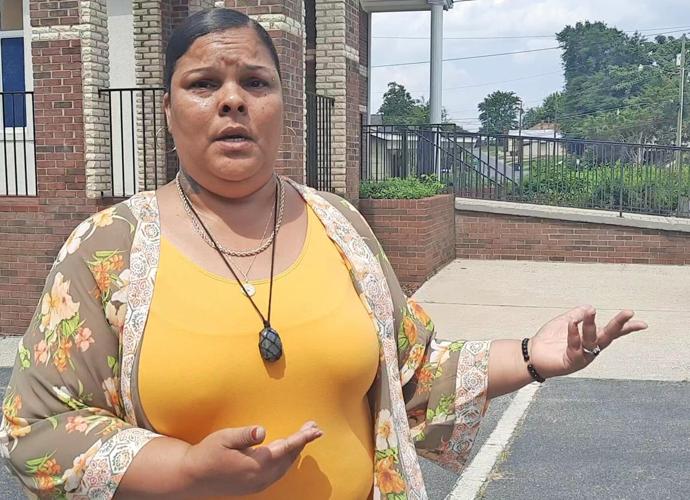 Pinkie Sims speaks about losing her younger brother, Shonniel Blackburn, in a shooting in Hickory. She also shared her views on gun violence in the community. 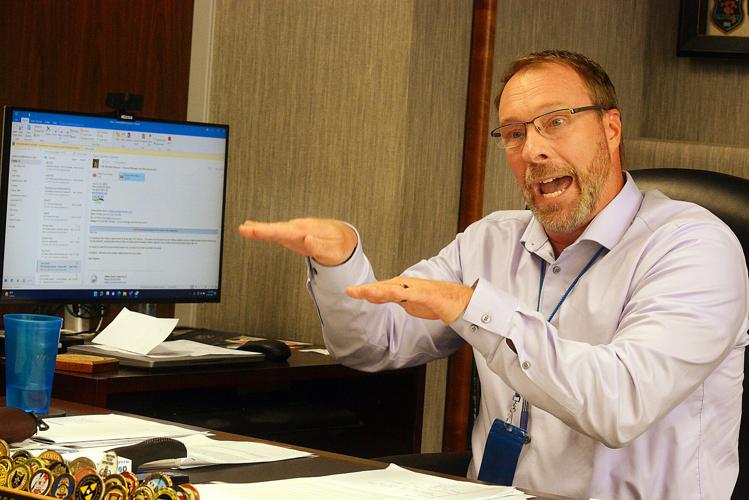 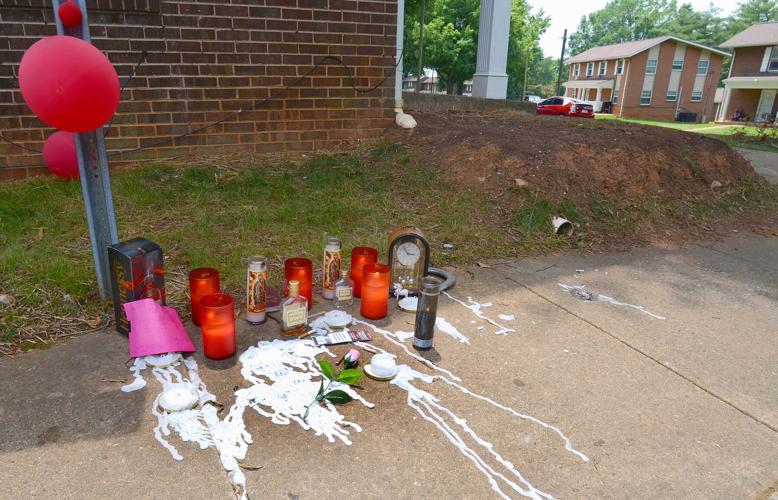 Friends and community members set up a memorial for Shonniel Blackburn shortly after the 35-year-old was shot dead on Monday.

Shonniel Blackburn was on the way to pick up his children when he was gunned down Monday at the Blue Ridge Heights Apartments, said his sister, Pinkie Sims.

The 35-year-old father of five died at the scene. Police have charged three 16-year-olds and one 15-year-old in the case. All four were in custody by Friday afternoon.

Not long after Blackburn died, a makeshift memorial emerged.

The sweet smell of burning candles filled the air around the sidewalk where Blackburn was found. Loved ones tied red balloons to a parking sign at the scene and left mementos, including a clock, a bottle of Hennessy cognac and a silver-colored horseshoe on Tuesday.

Two days after her brother’s death, Sims went to the United House of Prayer for All People to reflect on her relationship with her deceased brother. The church sits less than a half-mile from the scene of the shooting.

Sims’ grief extended beyond her brother. “I cry every day for my community, my city,” Sims said. “I mean, what has it come to?”

Blackburn is the latest victim of gun violence in Hickory.

Anderson was charged with assault with a deadly weapon with intent to kill. Two other men are facing possession of a firearm by a felon charges.

Waves of shootings are not unfamiliar in Hickory in recent years. Several shootings remain unsolved.

In many of those cases, law officers have an idea of who is responsible, said Hickory Police Chief Thurman Whisnant.

“I will tell you in most of the cases that are unsolved, it’s fair to say we have strong persons of interest, but we just don’t have, we’ve not reached that level that we have to have,” Whisnant said. “The one common denominator that I will say about the ones we don’t have charges in is we know that there are people out in the community who have information that could share it with us.”

Police, victims’ families and community leaders alike point to fear of retaliation as a factor in the reluctance to come forward.

Trust is also key. Some family members of victims say it’s lacking, particularly between the Black community and police. Some say it seems the police are not concerned about violence in Black neighborhoods.

Whisnant said many of the frustrations people have with police are due to the visibility of law enforcement and the real problem often lies with what he says are deficiencies in other parts of the justice system.

When it comes to police involvement in the Black community, Sims said, “Sometimes it feels like they don’t work for us.”

“They have to come into the community and help us,” Sims said. “Don’t come to arrest us all the time, for the littlest thing sometimes. Come in and show that you’re concerned for your city, for the communities.”

She said she would like to see more positive interactions between police and community members while also acknowledging some instances in which officers did a good job engaging with community members.

Other family members of gun violence victims echoed the sentiment. Lanora Evans lost her 27-year-old daughter, India Rice, in a May 2021 drive-by shooting. The case has not been solved.

Evans paid for three billboards about her daughter’s killing and asked people to call the police. She kept them up for about three months, until she could no longer afford it.

The billboards are gone, but the frustration remains.

“One minute they’ll tell me something, and then they’ll give me encouragement (and) I’m like, ‘OK,’” Evans said of her interactions with police. “And then the next minute it’s like, ‘What is going on?’”

Evans said police did not seem to be invested in violent crimes in the Black community while also criticizing the actions of community members.

She said she believes more should be done to protect witnesses to allay the fear of retaliation.

The Rev. David Roberts II, pastor at Morning Star First Baptist Church and a leader in the Ridgeview community who has built a relationship with police, described the Black community’s trust in police as 50-50.

He said age tends to be an important divider when it comes to trust of the police. Some older people do not trust police because of bad experiences, while some of the younger people have had positive interactions with police at community events, Roberts said.

Whisnant said he believes the relationship between police and the Black community is strong overall. He points to police attendance at community meetings in Ridgeview and participation in events like block parties and summer camps.

He also spoke of the dedication he had seen from his employees, saying some staff members have been told they needed to take a few hours for rest after working to the point of exhaustion on recent cases.

The family members of victims do not place all the blame on police.

“Nobody wants to tell on anybody,” Sims said. “Nobody. Everybody’s afraid to say what they’ve seen. That’s why a lot of these murders go unsolved. But it’s going to continue to go unsolved if we keep protecting the ones that’s killing and murdering and ruining our children’s lives. We’ve got to start speaking up.”

Roberts decried what he refers to as a snitches-get-stitches mentality among some in the community.

“I’ve been saying for a while I don’t worry about snitches getting stitches because moms are getting coffins and ashes,” Roberts said.

‘What more can law enforcement do?’

Whisnant said police often receive the brunt of the criticism for cases because of their visibility. He added that police are at the mercy of what he called defects in other parts of the criminal justice system.

In particular, Whisnant is critical of what he regards as lenient bail policies that he says allow violent offenders to get out of jail and contribute to fear of retaliation.

Whisnant asks: “What more can law enforcement do?”

When it comes to protecting witnesses, Whisnant said there are things the police can do, but given the constitutional right of defendants to confront their accusers, they cannot completely ensure that identities will never be revealed.

He also said in his experiences in law enforcement, he has seldom, if ever, seen retaliation for giving information.

While the department is committed and works hard, Whisnant said, police do often find the lack of communication from community members vexing.

“I also see the frustration when we watch a video of a shooting and there’s three or four young Black males … and on the video they’re standing out in 95-degree heat at the corner of a building with a hoodie on and sweatshirt … and there’s multiple people that walk by and nobody called the police,” Whisnant said.

He added: “That’s what has to change. What if one person would have called the police and said, ‘Hey, there’s four suspicious folks standing here, and it’s 95 degrees and they have sweatshirts on?’

“We may not have a homicide.”

A woman injured in a shooting Sunday was still in critical condition Monday morning but is expected to live.

25-year-old charged in double shooting that left one dead, one injured

A 25-year-old man was charged in a double shooting in the St. Stephens area on Sunday morning. One person died and another was seriously injured.

A federal jury in Statesville convicted Vincent Deritis, 33, of Hickory, on charges of sexual exploitation of a minor and possession of child …

A 20-year-old man and 39-year-old woman have been arrested on drug trafficking charges after deputies responded to an overdose call.

A Sherrills Ford man charged with sex crimes in Iredell County is a suspect in similar cases in Catawba County.

One person is dead and another seriously injured after a shooting at home near St. Stephens Elementary School.

Two more men have been charged in a June 2 shooting in Hickory that left an 18-year-old dead and two other young men injured.

A 15-year-old charged with murder in the shooting of 35-year-old Shonniel Blackburn surrendered to Hickory police on Friday, Hickory Police Ch…

Pinkie Sims speaks about losing her younger brother, Shonniel Blackburn, in a shooting in Hickory. She also shared her views on gun violence in the community.

Friends and community members set up a memorial for Shonniel Blackburn shortly after the 35-year-old was shot dead on Monday.