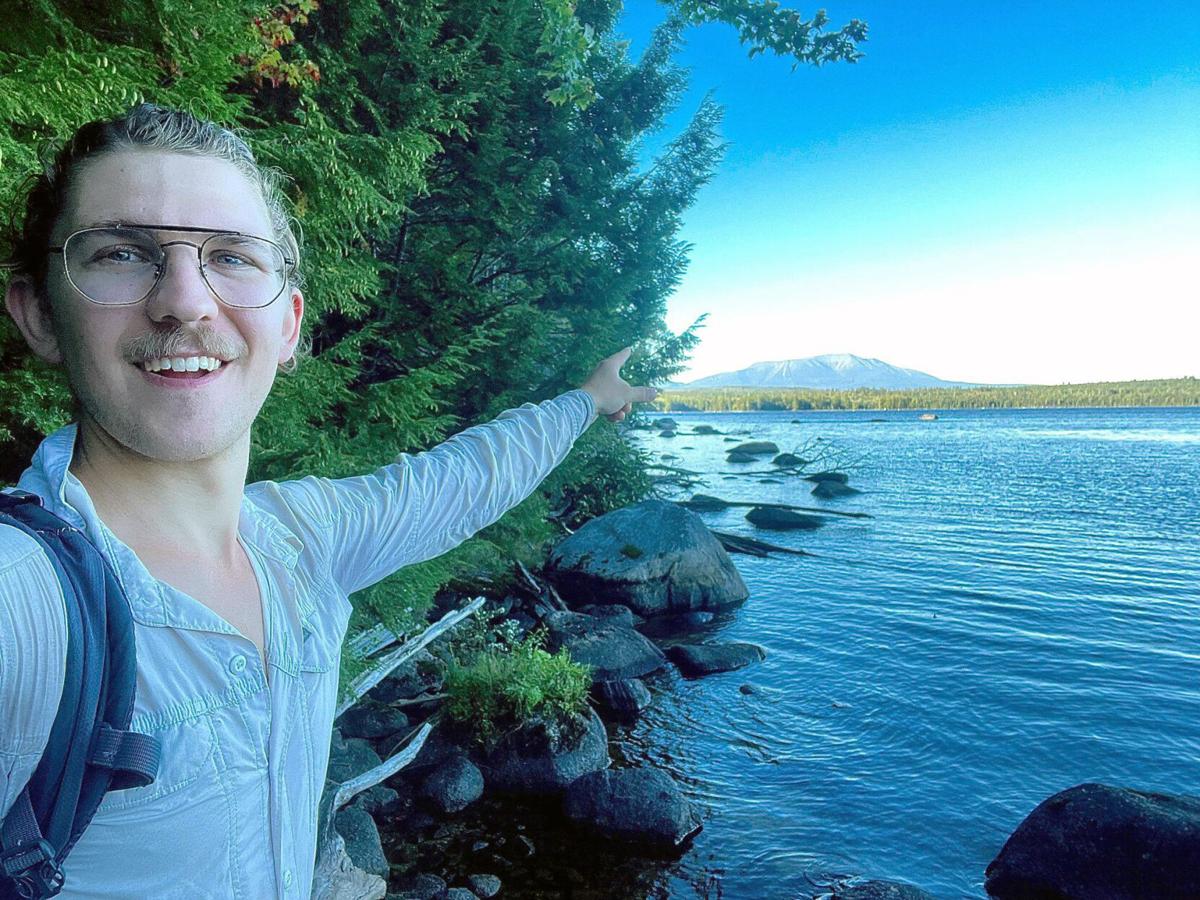 Sam Abernethy of Conover nearing the end of his thru hike, pointing at Mt. Katahdin, 48 miles away from the summit. 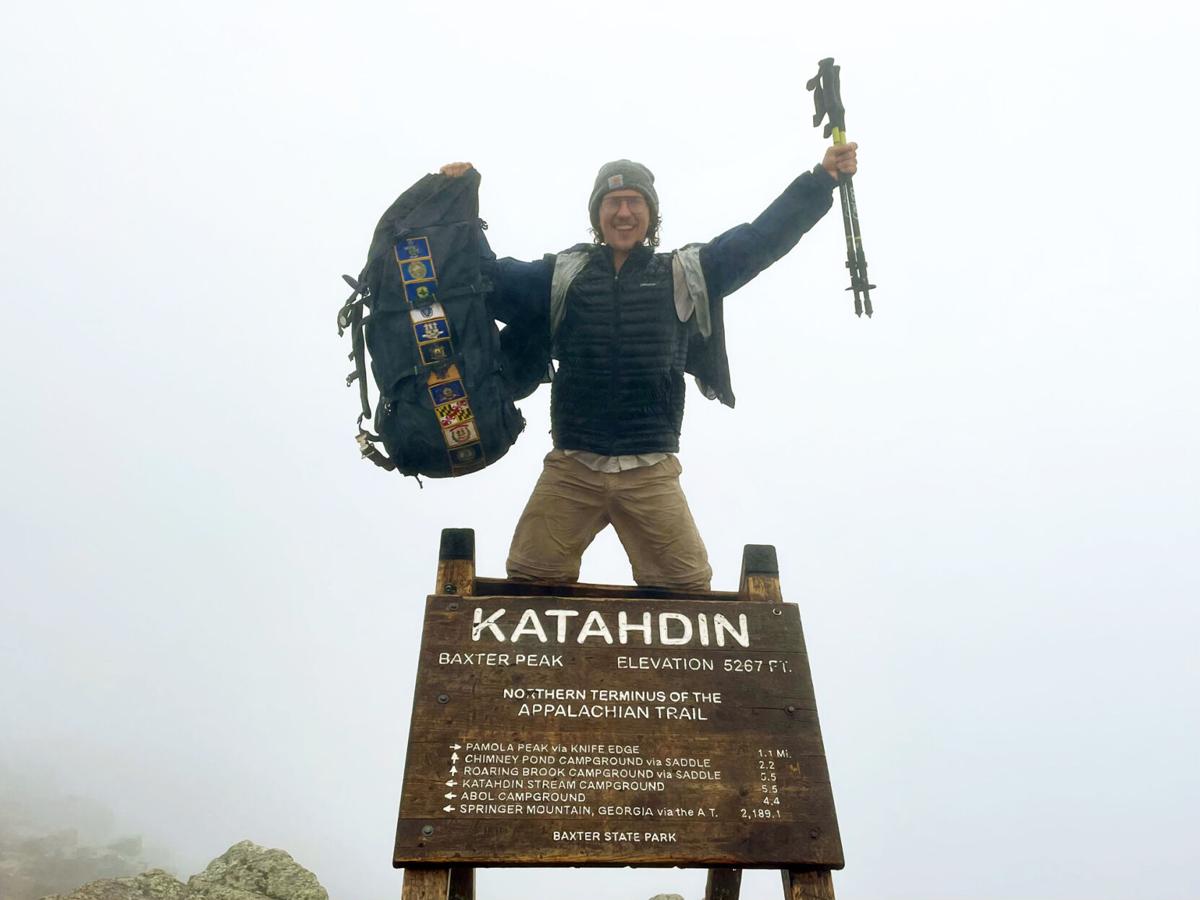 Sam Abernethy of Conover makes it to the northern terminus of the Appalachian Trail.

Special to the Record

Having scrambled up the final wet rocky surface to the chilly peak of Mt. Katahdin, Sam Abernethy of Conover concluded his 2,193-mile thru-hike of the Appalachian Trail. Starting on April 26 in Georgia, Abernethy walked just shy of five months to reach the northern terminus located near Millinocket, Maine, on Sept. 22.

“It was one of the hardest yet most rewarding experiences,” Abernethy said. “At first it is a physical challenge of making it up the next hill or trying to stomach enough food and water to offset the amount of calories you’re burning. But as time passes, your body adapts to allow for this type of lifestyle. Like most things, the challenge shifts to become a matter of endurance.”

As the trail passes the Great Smoky Mountains and the southern highlands, the trail has less radical changes in elevation and resembles a green tunnel up until the White Mountains in New Hampshire.

“I started the trail with a friend of a friend from Atlanta and another guy from Salt Lake City joined us around mile 300,” Abernethy said. “The three of us hiked a couple hundred miles with various other people, but just the core group ended up staying consistent to the end.”

In an article posted in October 1921, Benton Mackaye laid out his vision of a continuous walking trail that would span the Appalachian Mountains making this year the 100th anniversary of the trail’s conception. Although only 59 people had completed a thru-hike by 1969, more and more hikers set out to achieve this goal every year.

“One of the hostel owners talked about hiking the trail back in 1973 and going through 13 pairs of cut-off jeans, making fires to cook food, and carving the AT symbol straight into trees to help mark the unbeaten path,” Abernethy said. “Although there were other thru-hikers that year, he didn’t personally encounter anyone else with the same goal.”

Now, over 20,000 total thru-hikes have been recorded by the Appalachian Trail Conservancy throughout the years.

Abernethy, a 2014 graduate of Newton-Conover High School and a 2018 graduate of Virginia Tech, has an engineering degree and has most recently worked with McGill Associates in Hickory and in Raleigh. He is an Eagle Scout from Troop 322 at First United Methodist Church in Conover and worked at Philmont Scout Reservation in Cimarron, New Mexico, as a trail guide for two summers.

Twenty-six resupply boxes, four pairs of shoes, and one very worn white shirt later, Abernethy was recorded as the 985th thru-hiker to complete the trail going northbound this year.

As outdoor enthusiasts continue to make the pilgrimage stretching along the eastern side of the country, the market for durable lightweight gear has evolved.

“The style of the rugged outdoorsman has slowly turned into a different fashion that resembles a kindergartener going to their first day of school,” Abernethy said. “Backpackers often carry a bag that looks a little larger than a bookbag while tediously stepping over rocks and roots in bulky shoes that are usually vibrant colors while wearing dirty clothes and having Cheeto dust still on their faces from their fifth meal of the day.”

Although Abernethy saw a variety of wildlife including bears, deer, mice, groundhogs, porcupines, grouses, red eft juvenile newts, bald eagles and woodpeckers, some of the most notable wildlife were the people. All thru-hikers have a trail name. Something that is more simple and memorable than their real name, usually referring to an event that happened on the trail.

“Walmart” was given his name because his first thru-hike in 2019 was all but completed using gear supplied by the superstore that is now his namesake.

“A memorable interaction with him,” Abernethy said, “was him talking about this being his third thru-hike as he chain smoked cigarettes and soaked mac and cheese in cold water for his dinner. After drinking several instant coffee packets, he grabbed his 12-pound backpack and took off into the night to continue hiking up the next mountain.

“One trail character I didn’t get the chance to meet was Nimblewill Nomad, the 82-year-old attempting to be the oldest man to complete a thru-hike of the Appalachian Trail. Although he has a little over 300 miles remaining, he has already completed 2,300 miles this year due to him starting in Alabama and hiking the Pinhoti Trail followed by the Benton Mackaye Trail to reach the southern terminus of the Appalachian Trail.”

Benton Mackaye, the trail’s founder, had a stance on thru-hiking that was mostly negative with the mindset that attempting this stunt causes hikers to miss the whole point of the Appalachian Trail experience when rushing to cover miles.

“I definitely grew to understand this as I got further along on the trail,” Abernethy said. “Your days become filled to the brim with walking and you quickly lose the essence of peace in your surroundings. But what Mackaye didn’t predict for thru-hikers was the altruistic energy that radiates through this migrating community encouraging one another to accomplish something bigger than what could have been achieved by one individual’s willpower alone.”

Abernethy plans to continue living in the Hickory area as he starts his next chapter of life.

Sam Abernethy of Conover nearing the end of his thru hike, pointing at Mt. Katahdin, 48 miles away from the summit.

Sam Abernethy of Conover makes it to the northern terminus of the Appalachian Trail.