TNF: Scores and updates from Raiders vs. Rams

Family and friends say an accident that claimed the life of a Hickory man was preventable.

Jon Hopson found his friend’s Jeep overturned in a creek Saturday morning. Phillip John Paxson, 47, was dead inside of the vehicle. Paxson ran off of a collapsed bridge on 24th Street Place Northeast around 11 p.m. Friday, according to N.C. State Highway Patrol.

Hopson and Paxson were together Friday night for a birthday party at Hopson’s home.

Paxson should be alive, Hopson said.

“It’s tragic. I’m very sad and mad,” Hopson said. “We’ve been fighting this battle since this bridge washed out. Nobody wants to take responsibility for fixing it or barricading it.”

The bridge has been closed since 2013, after it collapsed when a culvert washed away. Hopson said that from his house on 26th Street Drive Northeast to the bridge on 24th Street Place Northeast there are no signs indicating the bridge is closed.

He also said there was no barricade. The barricade that was there had been blown into the creek before the accident.

“Over the years, (the gap in the highway) just kept getting bigger and bigger,” Hopson said. “We’ve petitioned and tried to raise money for an attorney and got absolutely nowhere.”

According to the Highway Patrol, the road is not maintained by the N.C. Department of Transportation.

Paxson’s wife, Alicia, said her family was celebrating their 9-year-old’s birthday and a friend’s son’s birthday Friday. Alicia Paxson said she and her husband drove separately to the party because she brought the decorations and cake.

Alicia Paxson said daughters Juliet, 6, and Amelia, 9, rode to the party with Philip Paxson. The girls rode home with her. She said she is thankful the girls were not in the car when their father wrecked.

Alicia Paxson’s sister Kayla Bubar said Philip Paxson loved his daughters. Alicia Paxson said he would let the girls do his hair and would wear their jewelry.

Alicia Paxson said family members and friends made a memorial to Philip Paxson on Sunday. Dozens of flower bouquets, photos and trinkets lined the edge of the collapsed bridge. Alicia Paxson said she left a fake $100 bill, because he was known to play jokes on people by giving them a fake $100.

“I just want people to know that it’s not his fault,” Alicia Paxson said.

Watch Now: "You couldn't ask for a better dad," wife of man killed in car accident

Did you know your face is covered in tiny mites?

Apollo lifted out of Versailles' gardens for restoration

Apollo lifted out of Versailles' gardens for restoration

Tom Brady and Stephen Curry under investigation after FTX collapse

Tom Brady and Stephen Curry under investigation after FTX collapse

Why walruses are fed restaurant-quality seafood at zoo in Washington

Why walruses are fed restaurant-quality seafood at zoo in Washington 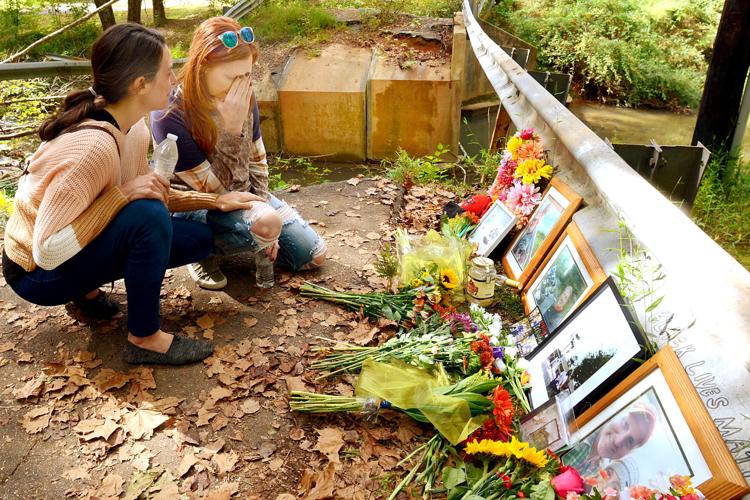 Alicia Paxson, second from left, wife of Philip John Paxson, grieves as her sister Kayla Bubar comforts her at the scene of a car accident that claimed Philip Paxson's life Friday night.