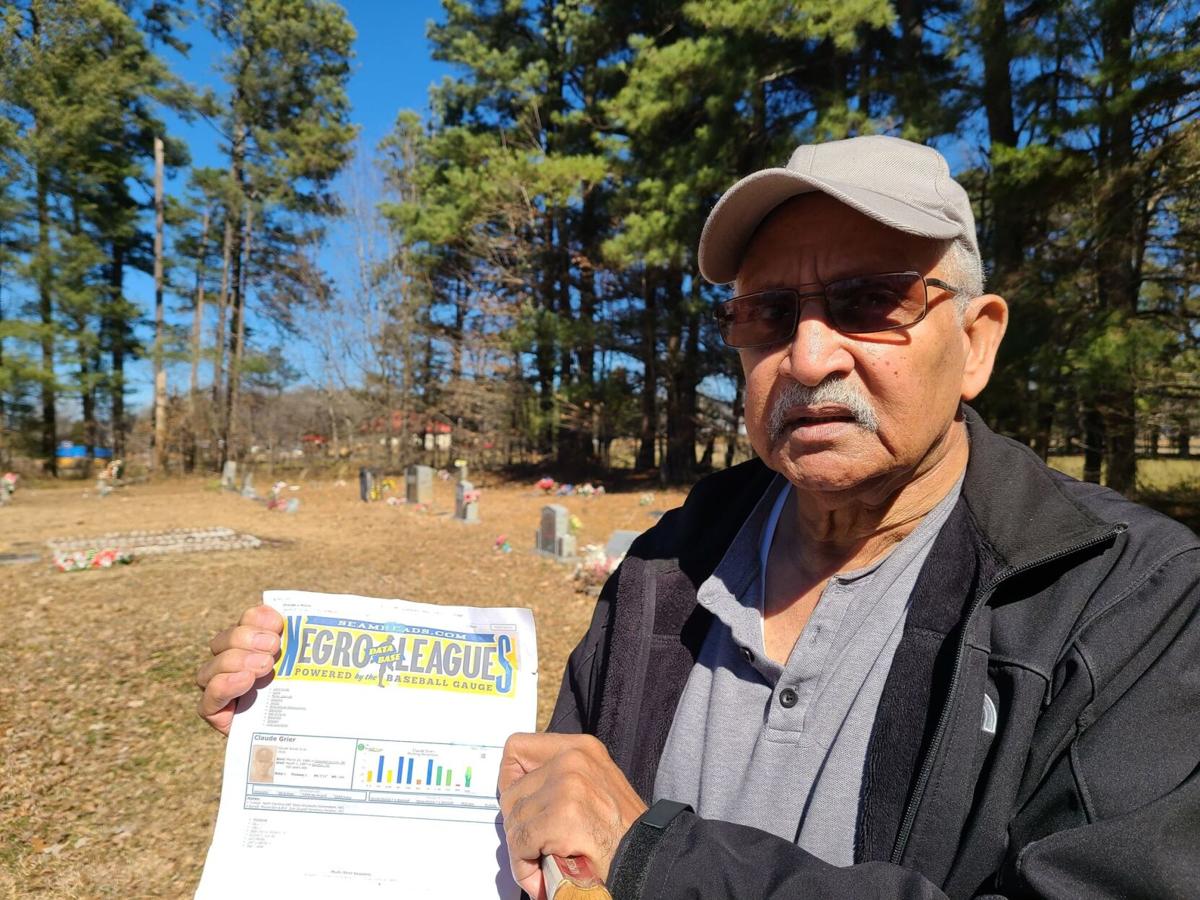 Claude Grier, son of Negro Leagues player Claude "Red" Grier, holds up a page from the Seamheads Negro Leagues Database with information on his father. The small headshot on the printout is the only photo Grier has of his father. 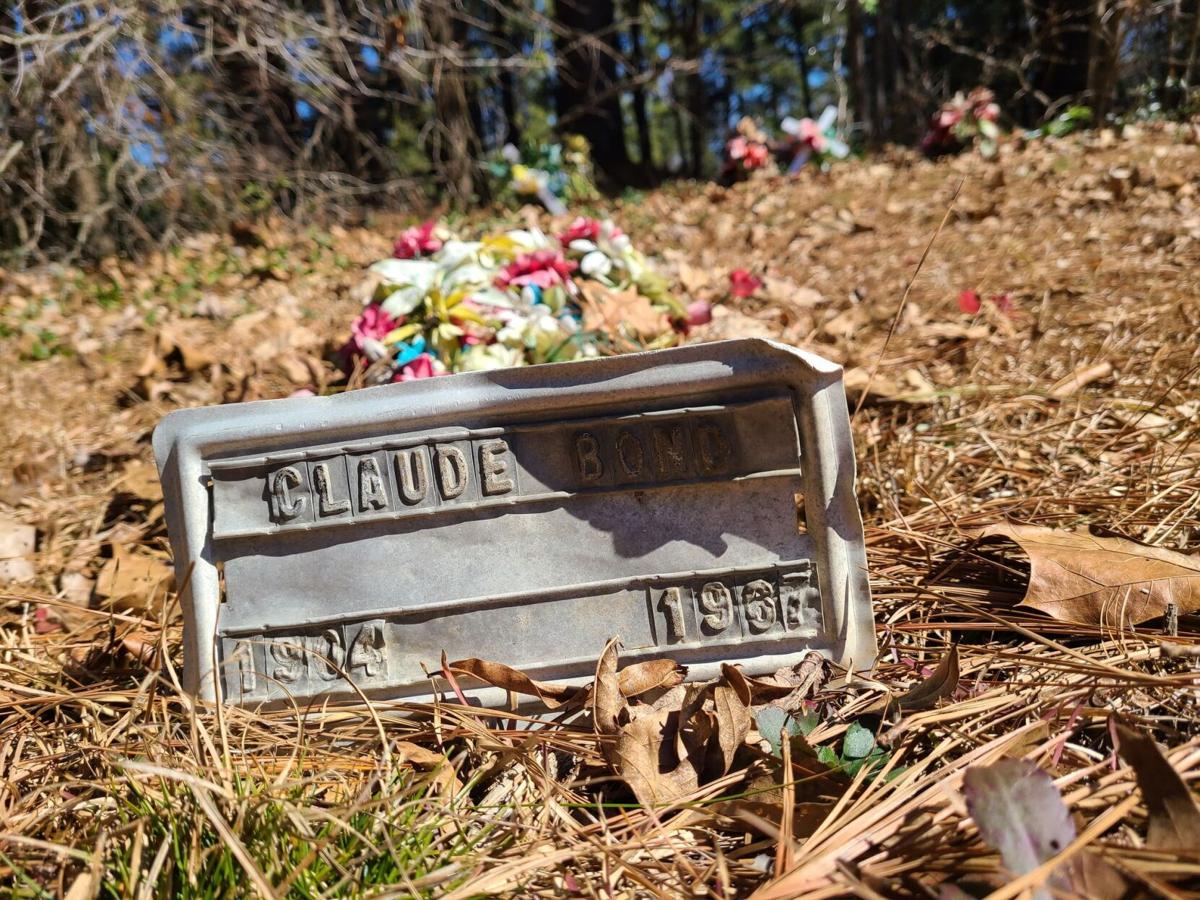 Claude Grier, a Negro Leagues ball player who threw a no-hitter in the 1926 Colored World Series, is a Catawba County native who is buried in Newton.

The grave isn’t much to look at. There’s no headstone. Instead, there’s a small, bent metallic marker in a back corner of the graveyard at Mt. Olin AME Zion Church in Newton.

The last name of the deceased is missing, having fallen off or peeled away.

It is the final resting place of Claude “Red” Grier, a man who may soon be officially recognized as the first pitcher to throw a World Series no-hitter.

Grier, a Catawba County native, played in the Negro Leagues for about four years in the 1920s.

He recorded his historic achievement in Game 3 of the 1926 Colored World Series while pitching for the Atlantic City-based Bacharach Giants.

Grier walked six batters and struck out eight in the game. His team defeated the Chicago American Giants 10-0 that day but would go on to lose the series.

Negro Leagues historian Gary Ashwill said Grier’s no-hitter came on the heels of a poor performance in Game 2 in which Grier gave up seven runs in the first two innings.

“I don’t speak for MLB,” said Ashwill. “I couldn’t tell you what they would say the official status is but, you know, if they recognize the Negro Leagues as major, then, yeah he would be the first post-season no-hitter.”

Ashwill’s work was cited in the MLB announcement.

The World Series no-hitter capped off a strong season for Grier.

That year, Grier struck out 167 batters, an accomplishment which places him third on the list of most Negro Leagues single-season strikeouts behind Satchel Paige and Slim Jones, based on Ashwill’s research.

Ashwill referenced an assessment of Greer written in 1925 by Ben Taylor, a Hall of Fame first baseman who served as Grier’s first manager.

Taylor praised Grier’s control and wrote he had “curve, speed and a good slowball.” Taylor added that Grier had “the making of one of the greatest pitchers we have ever had” if certain deficiencies in his play were corrected.

Taylor outlined some of those shortcomings.

“If he’s not given a great deal of practice in fielding, any club can beat him by bunting,” Taylor wrote. “He does not take good care of himself.”

Grier’s son, Claude Grier, who lives in Conover, said he started to have a renewed appreciation of his father’s baseball legacy following MLB’s decision to include the Negro Leagues statistics.

He said his father did talk some about his baseball career, but only mentioned the no-hitter in passing.

As a result of a fire, the younger Grier has no photos of his father except for a small headshot on a printout from the Seamheads Negro Leagues Database.

The younger Grier did recall one story his father told of a feat of athleticism that did not involve pitching.

He said his father once accidentally broke the collarbone of an opposing player while pitching in Chicago.

“(The injured player’s) girlfriend came out there on the field, pulled a straight razor out and ran him off the field,” Grier said. “He said he had to run through centerfield and jump over the fence and go to the place where there were staying at.”

Claude Grier, son of Negro Leagues player Claude "Red" Grier, holds up a page from the Seamheads Negro Leagues Database with information on his father. The small headshot on the printout is the only photo Grier has of his father.

Claude Grier, a Negro Leagues ball player who threw a no-hitter in the 1926 Colored World Series, is a Catawba County native who is buried in Newton.