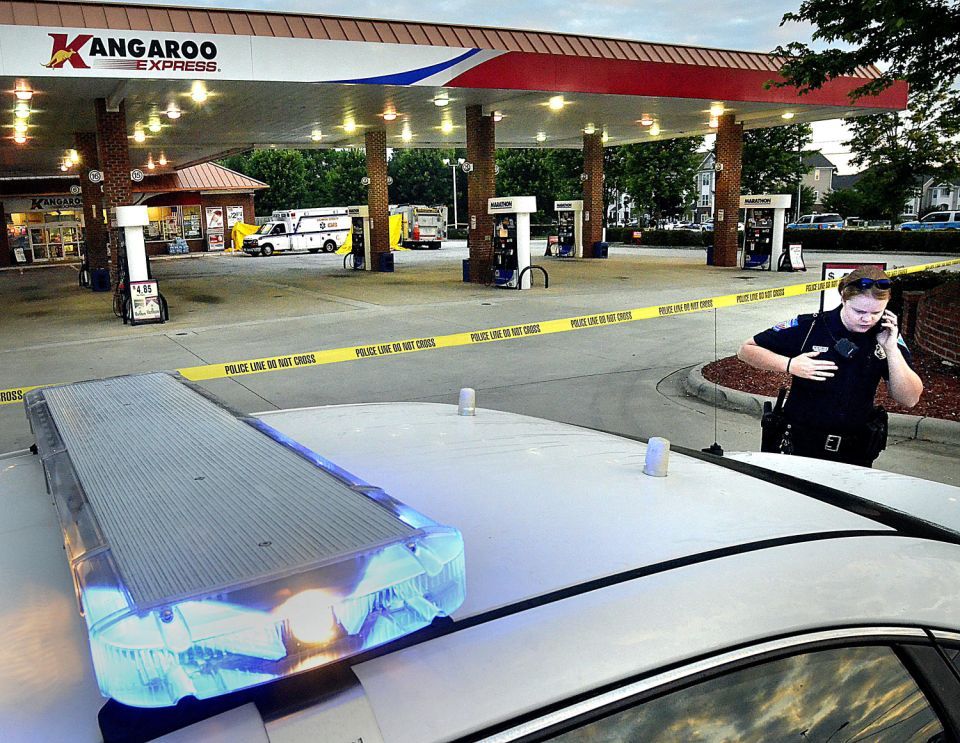 A Hickory police officer blocks the entrance to Kangaroo Express on North Center Street early Monday morning because of an officer-involved shooting. One person was dead. 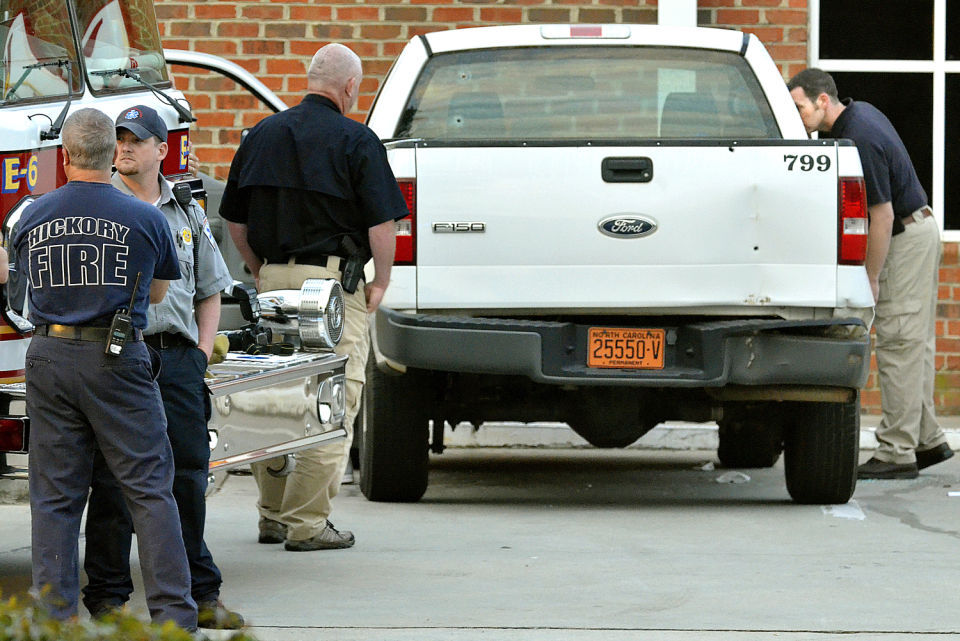 Hickory police officers were involed in a shooting at the Kangaroo Express on North Center Street early Monday morning. Here, Hickory police Capt. Reed Baer (right) peers into the cab of a City of Hickory truck, which was reported stolen. 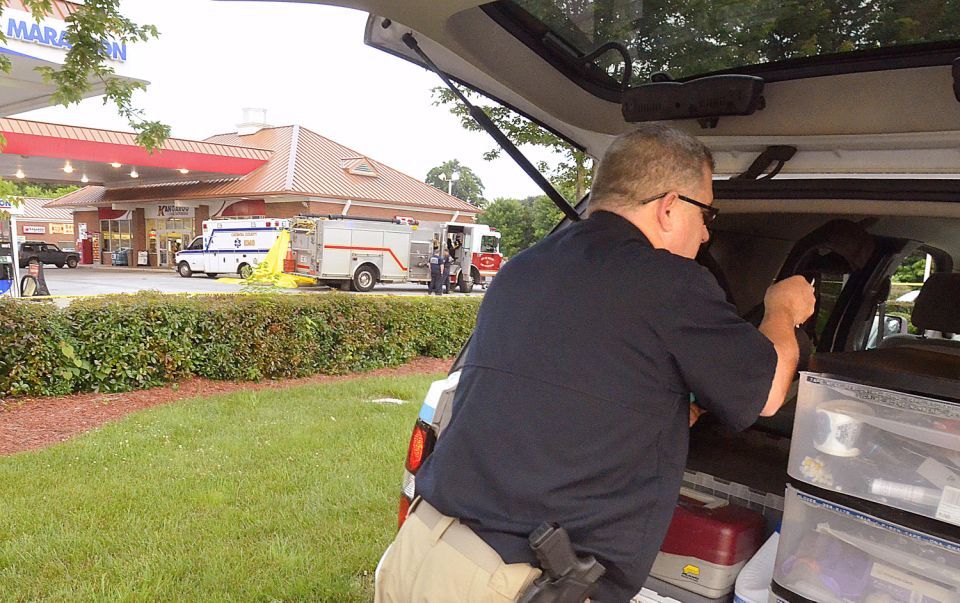 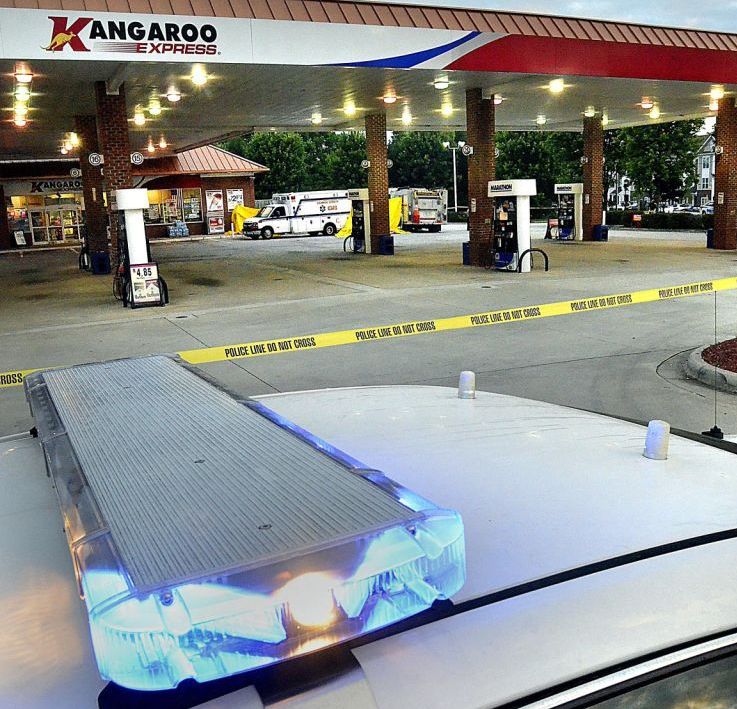 A Hickory police car blocks the entrance to Kangaroo Express on North Center Street early Monday morning after an officer-involved shooting killed one.

HICKORY NC – Commuters looked out their car windows toward the Kangaroo Express in Viewmont on Monday morning.

A woman dabbed makeup on her face as she waited at the red light, eying a Hickory police officer posted at one of the gas station’s entrances. A man stopped behind the woman’s car sipped from a thermos and turned his head toward the yellow tarp strung between an ambulance and a fire engine, blocking his view of the City of Hickory pickup truck with bullet holes in its rear window and tailgate.

Hickory police officers shot and killed Drew Marian Spencer, 21, early Monday morning after they said he pointed a gun at them in the parking lot of the gas station at the intersection of North Center Street and 29th Avenue Drive NW. He was driving a stolen city truck when he pulled into the parking lot, police said.

Half a dozen police cars were still parked at the convenience store at 7 a.m. Crime scene tape formed a perimeter around the business. Investigators roamed the parking lot. More than a dozen yellow plastic signs with black numbers dotted the ground where police found evidence.

Police Chief Tom Adkins would not release the name of the two officers involved in the shooting. He said they were placed on paid administrative leave, which is customary during investigations of officer-involved shootings. The investigation will be led by the State Bureau of Investigation. The Hickory Police Department will conduct a separate administrative investigation.

“Our thoughts and prayers go out to the Spencer family, as well as the officers involved in this incident this morning and their families,” Adkins said in a release Monday afternoon. “This is the second time in less than two weeks a suspect has shot at HPD officers while they were trying to apprehend suspects that had stolen a vehicle. Unfortunately, in this case, our officers had to use deadly force to protect themselves.”

Hickory officers were at the Kangaroo Express getting coffee about 3:30 a.m., Adkins said.

Officers hoped to determine whether the suspect was involved in a second fight at McCroskey’s reported about 12:50 a.m. Monday, Adkins said.

Officers went outside the store. They spoke with the suspect, who was seated in the driver’s seat of a City of Hickory pickup truck with damage to its passenger side.

While one officer spoke with the suspect, the suspect pointed a handgun in his direction, according to information from the Hickory Police Department. The officer moved away from the truck as he and another officer fired at the suspect.

Adkins said it appears the suspect fired a round from the semi-automatic handgun he was carrying. A spent casing that failed to eject was found in the gun. The spent casing caused the gun to jam, preventing another round from loading into the chamber.

The officers fired multiple shots toward the suspect, Adkins said.

The handgun was in the suspect’s hand when officers returned to the vehicle after the shooting, police said. He was pronounced dead in the parking lot.

The officers involved were not injured.

Sharon Wilson, who works at the Walgreens near the convenience store, said she heard no gunshots, but looked outside about 3:30 a.m. to see more than a dozen rescue vehicles with their lights flashing. She wasn’t sure what was going on, so she called Hickory police. The person she spoke with told her to lock the doors of the Walgreens and keep everyone inside. The store was on lockdown for about two hours.

“It was a little scary. Too close to home,” Wilson said.

Wilson said she saw officers take the dead man’s body out of the truck about 6:15 a.m.

Police are working to determine whether a suspicious person reported walking on Cloninger Mill Road about 2:45 a.m. Monday was the suspect shot by officers, Adkins said.

The Hickory Daily Record submitted a public records request Monday to Adkins asking for the contents of emergency phone calls received by or on behalf of the police department related to the shooting, as well as the contents of emergency communications between or among law enforcement agencies and the names of complaining witnesses and officers involved in the shooting.

Adkins confirmed his receipt of the request in an email and said he would provide records allowed by law after consulting with Hickory’s deputy city staff attorney.

HICKORY NC – About the time Drew Spencer’s friends gathered at his home Tuesday afternoon to mourn his death, Hickory police released the name…

A Hickory police officer blocks the entrance to Kangaroo Express on North Center Street early Monday morning because of an officer-involved shooting. One person was dead.

Hickory police officers were involed in a shooting at the Kangaroo Express on North Center Street early Monday morning. Here, Hickory police Capt. Reed Baer (right) peers into the cab of a City of Hickory truck, which was reported stolen.

A Hickory police car blocks the entrance to Kangaroo Express on North Center Street early Monday morning after an officer-involved shooting killed one.