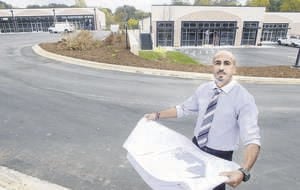 Raj Mirchandani holds blueprints to his new strip mall he has been working on developing the vacant buildings at 930 U.S. Highway 70 SW. 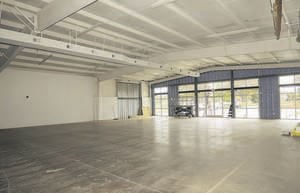 Raj Mirchandani  renovated an old building  for retail space that meets what Mirchandani sees as an unmet need in that area of Hickory.

HICKORY -- After years of vacancy, a developer is hoping to turn the buildings at 930 U.S. Highway 70 SW into a thriving retail outlet and community center.

Raj Mirchandani, a managing partner with AKSS Real Estate, took an interest in the property and purchased it in 2013.

The buildings, which had previously served as a furniture warehouse and showroom, had several features that would make it unappealing to many developers, Mirchandani said.

“A lot of people overlooked the property because the grade was off, and there was a lot of variables people just couldn’t get past,” Mirchandani said.

After buying the property, the developers took time consider how they wanted to proceed with their project.

Over time, Mirchandani has developed a vision both for how the development would take place and what the location's final use would be.

Environmental concerns were a key consideration of the design.

To increase energy efficiency, the small valleys created by the sheets of metal that made up the roof were filled with insulation.

Focusing on re-use also had advantages from a business standpoint.

Mirchandani, who also has a background in retail, looked at the project from the perspective of a tenant.

By re-using much of what was already there -- rather than completely demolishing and rebuilding the property -- it lowered the overhead cost and will in turn help lower costs for the potential tenants, Mirchandani said.

“I wanted this to be successful for any tenant who comes in here, because after being a tenant in my own career, or in my own profession that was before this, I know how hard it is to make a business work nowadays,” Mirchandani said.

His plans for the end result for the property revolve around meeting what he sees as some of the unmet needs in that part of Hickory.

The space will be occupied by retail outlets, and the types of businesses Mirchandani is considering include the space for restaurants and even medical space such as an urgent care center.

The process for selecting tenants has been purposeful, with two tenants being rejected because they did not fit in with the developers’ ideas of what the space should be used for, Mirchandani said.

“So we’re being very selective as to bring tenants that we think will not only be successful from a business standpoint, but also be successful for the area of Hickory that we’re in right now, that will provide a need that this area does have,” Mirchandani said.

More than just a retail space, Mirchandani wants to create a community space at the site.

“If I could wave a magic wand, I really want this to be a gathering place for the neighborhoods and the community here,” Mirchandani said.

On some of the grass and pavement areas on the property, Mirchandani sees the potential for activities as diverse as outdoor dining, music  and perhaps even a farmer’s market.

Mirchandani’s vision of renovating the building and creating a community space fit in with goals the City of Hickory has identified for that same area.

The intersection of U.S. Highway 70 and U.S. Route 321 has been identified as a major gateway into the city, and a site for improvements using funds from 2014 bond referendum.

Improvements in that entrance to town would likely include landscaping, signage and some type of art work, Hickory Planning Director Brian Frazier said.

The work Mirchandani and his company have done help to improve the look of that corridor, Frazier said.

“But it really does dress up that corner, because that is one of Hickory’s gateways and just having that fairly, large abandoned site there didn’t look too good and it was vacant for a number of years,” Frazier said.

The city has worked with Mirchandani and his company on the project.

The Hickory City Council approved a $20,000 Vacant Building Revitalization and Demolition Grant  for the project in December 2015.

Construction on the exterior of the buildings is complete, and the interiors will be made to fit the needs of the particular tenants who occupy the space.

Mirchandani is hoping to start and continue a dialogue with those in the surrounding neighborhood, and hopes to reach out to local vendors as potential tenants.

“I want to talk to people, I want to get feedback from them as to what they want to see happen in the community,” Mirchandani said.

Probe shows WHO knew of sex claims in Congo

Firefighters and police respond to chemical spill on Highland Avenue

Hickory firefighters and police responded to a chemical spill at the Shurtape Technologies plant in Hickory on Wednesday morning.

Raj Mirchandani holds blueprints to his new strip mall he has been working on developing the vacant buildings at 930 U.S. Highway 70 SW.

Raj Mirchandani  renovated an old building  for retail space that meets what Mirchandani sees as an unmet need in that area of Hickory.