If you can gauge how people are feeling by their internet searches, American homeowner sentiment during the first months of the U.S. coronavirus crisis may be split: Some are eager to save money on their mortgages, and others are afraid of falling behind on their payments.

In late February, as mortgage rates began sinking to lows not seen since the spring of 2016, Google searches for “mortgage refinance” began climbing significantly week after week, peaking in mid-March at their highest point in at least 15 years.

A few weeks after “mortgage refinance” searches started mounting, as waves of closures and layoffs rippled across the country, Americans took to the internet looking for “mortgage relief” in numbers not previously seen. Both search terms peaked between March 15 and 28, according to Google Trends data.

These surges in search volume coincided with the economic turbulence related to the global coronavirus pandemic. Mortgage rates had been low and refinancing brisk even before the first diagnosed U.S. case of COVID-19, the disease caused by the virus, on Jan. 20. Rates ticked lower through February, and dipped below 3.4% on Feb. 28. From Feb. 20 through March, global markets crashed and experienced volatile swings not seen since the Great Recession. This volatility is ongoing. On March 19, California issued the first statewide stay-at-home orders that would shutter businesses. By the week ending March 28, a record 6.6 million new unemployment claims would be filed. 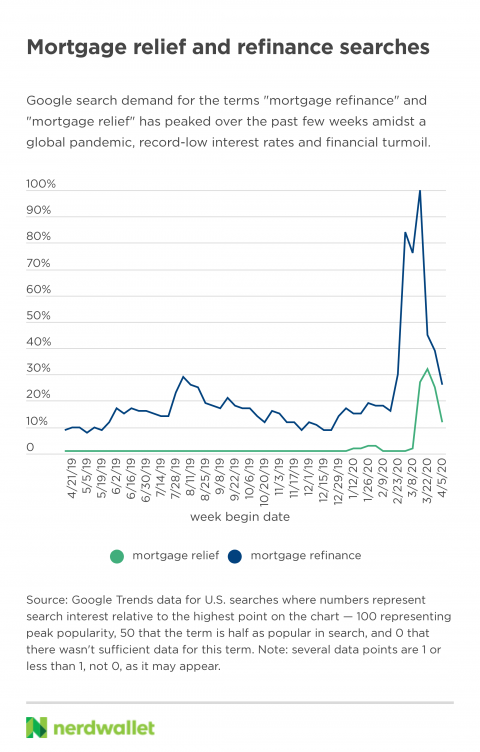 Through refinancing, borrowers can save money by replacing their current mortgage with a new loan that has a lower interest rate. But refinancing isn’t free. In most cases, a homeowner will pay as much as 2%-5% of the outstanding principal in refinance closing costs, so the math doesn’t make sense for everyone. 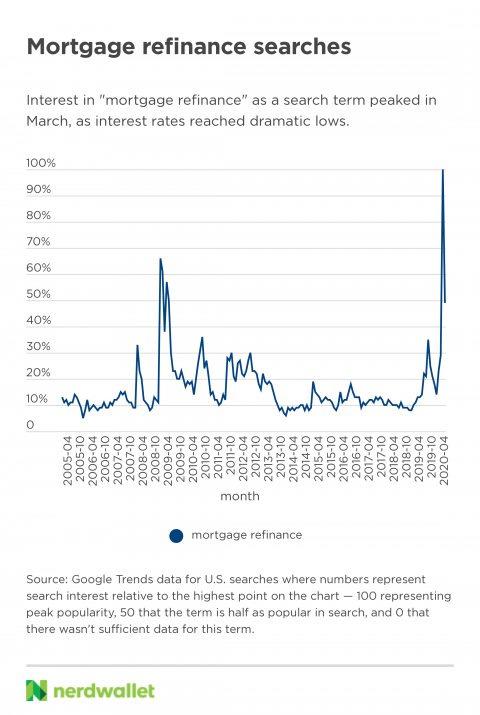 People searching for “mortgage relief” are likely feeling a financial pinch or anticipating one. The term is frequently used to describe regulations or practices designed to help homeowners avoid foreclosure. However, search volume data doesn’t distinguish between people searching due to an increased need or those researching a term that’s experiencing increased popularity in the news. And mortgage relief is in the news: Lenders and some state governments are taking steps to provide help to borrowers, and on March 27, the Coronavirus Aid, Relief, and Economic Security Act was signed, mandating mortgage forbearance terms for borrowers with federally backed loans.

But search volume confirms that interest in “mortgage relief” isn’t entirely new. It previously peaked in 2009, though only at a level 20% of where it peaked just a week ago. When compared with similar terms used during the housing crisis and Great Recession, the search interest for “mortgage relief” in March 2020 is unprecedented. Yes, that green line on the far right of the chart below is that peak. 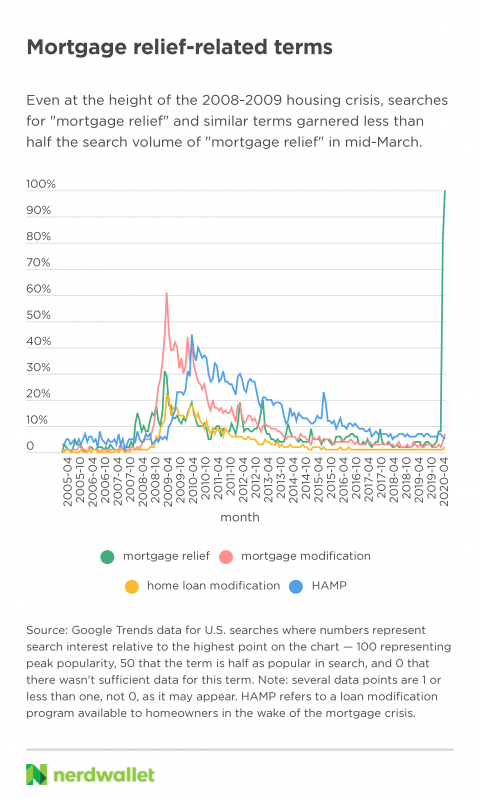 Borrowers currently struggling to afford their mortgage payments — and those who see such a struggle in their near future — are encouraged to contact their lender. Mortgage relief provisions of the CARES Act require many mortgage lenders to pause payments for up to 180 days of forbearance whether the borrower is directly or indirectly impacted by the pandemic. Lenders may also offer loan modification to make payments more manageable over the long term.

With our home & garden newsletter!

For Lower-Credit Homeowners, Refinancing Is Harder, but Not Hopeless

With mortgage interest rates hitting record lows, many homeowners have already refinanced — but others are having trouble finding a lender that will approve a new loan. According to a…

For homeowners in coastal states, the 2020 hurricane season could mean financial disaster. Named storms are rolling in at a record pace, with as many as 25 expected in the…

Financial Myths That Can Cost You When Home Buying

These Surprising Factors Can Affect Your Credit Score

These Surprising Factors Can Affect Your Credit Score