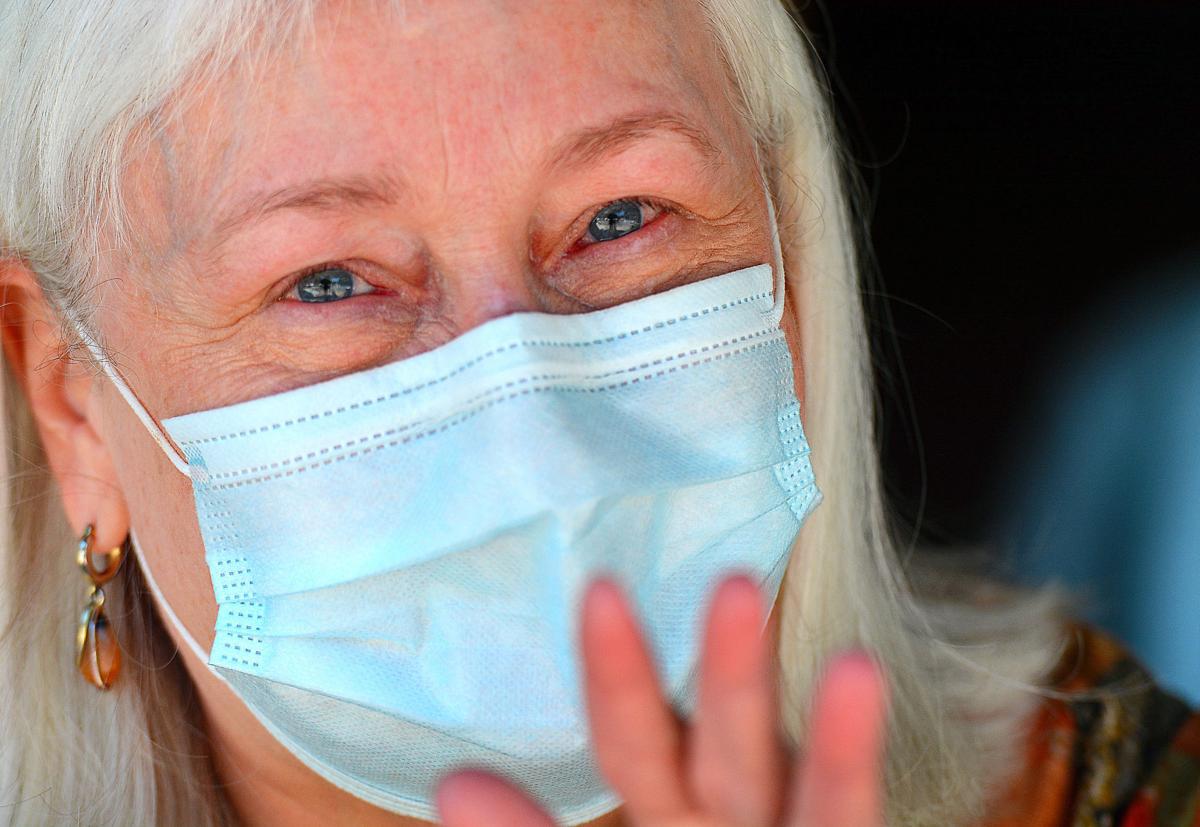 Rose Hefner with the Council on Aging and West Hickory Senior Center waves to family, friends and colleagues during her drive-thru retirement celebration. 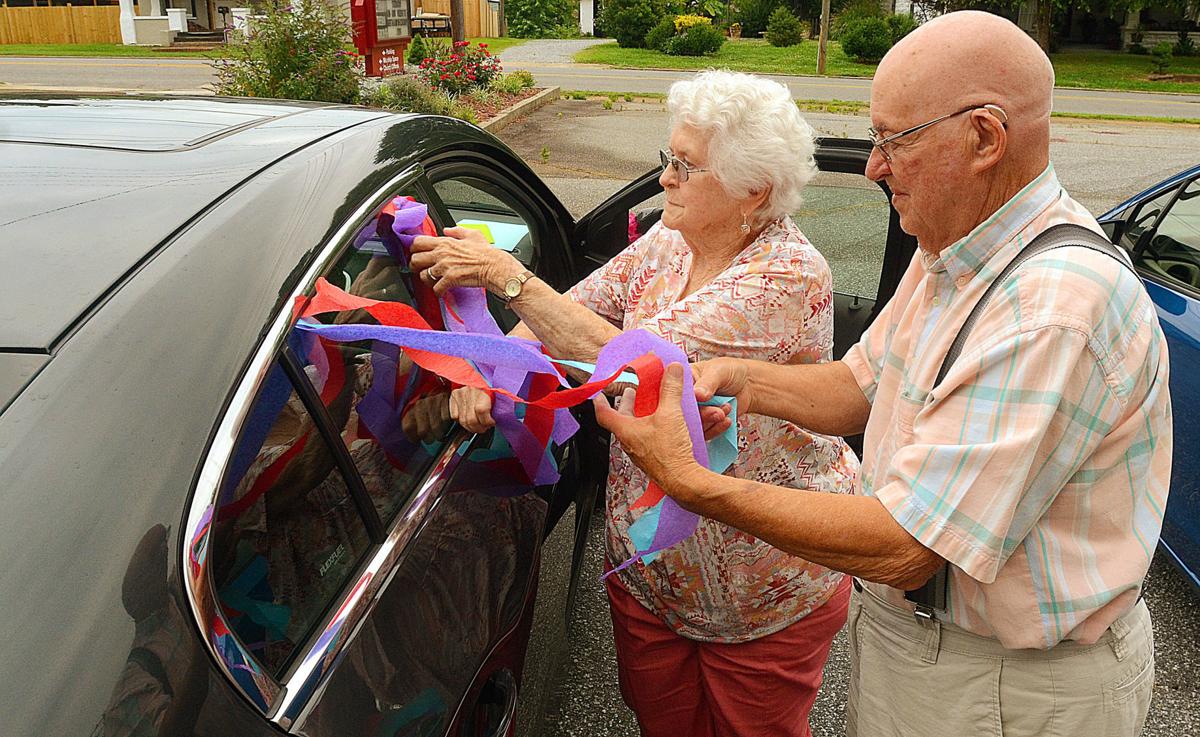 Margaret and Guy Cantley of Sherrills Ford decorate their car prior to the drive-thru retirement celebration for Rose Hefner. 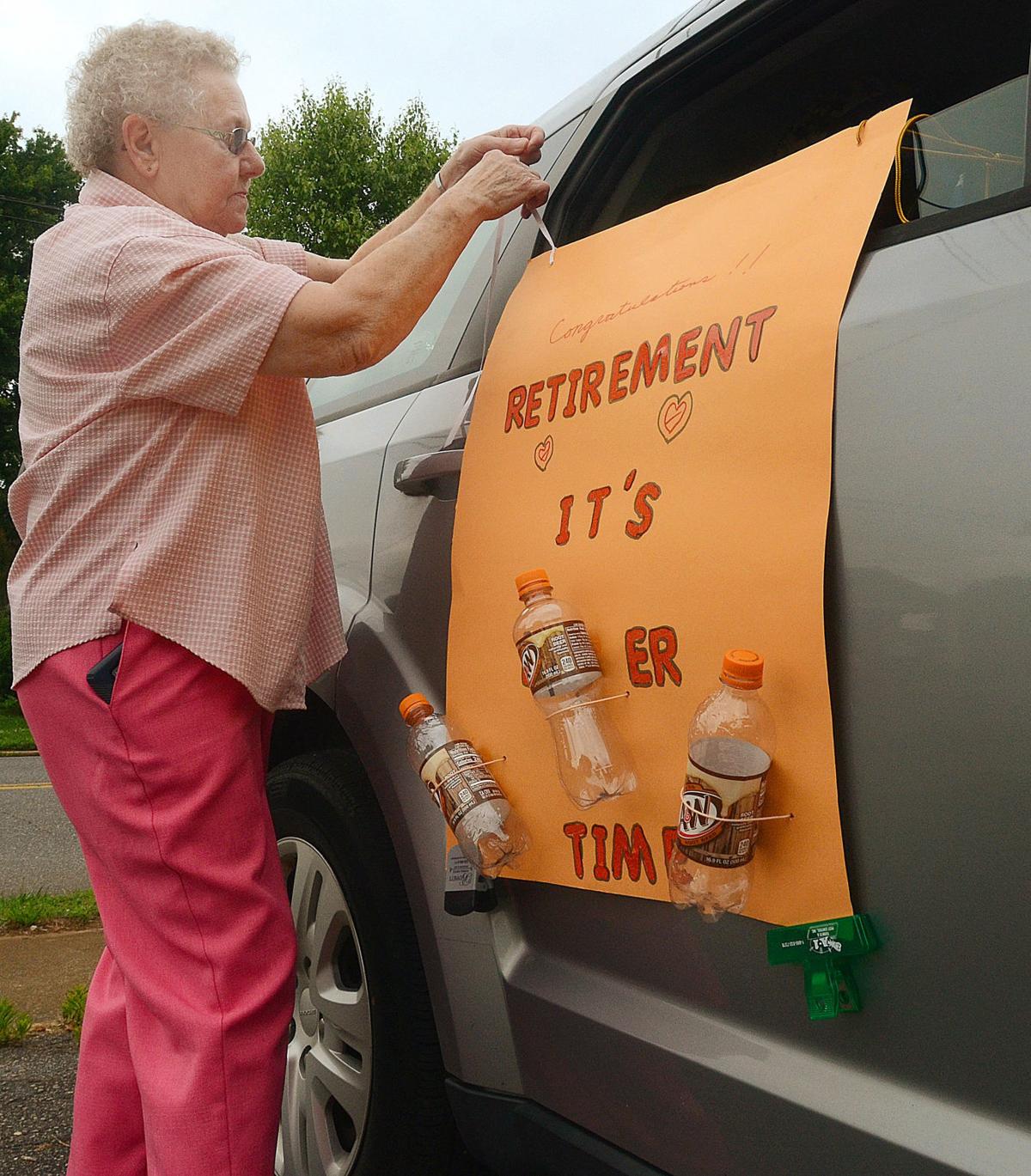 Vera Withers ties a poster to her car to celebrate Rose Hefner at the Council on Aging and West Hickory Senior Center.

On June 25, outside the West Hickory Senior Center, a fire truck, its loud horn beep, beep, beeping, passed by. Catawba County Council on Aging director Vickie Blevins suggested to administrative assistant Rose Hefner that they step outside to investigate the commotion.

Following the fire truck was a police vehicle leading a procession of decorated and sign-plastered cars carrying passengers bent on making sure that Rose’s upcoming retirement didn’t proceed without an extra special show of appreciation.

With COVID-19 preventing a big get-together of well-wishers, a parade had been deemed the best and safest way to let Rose know that she was loved and would be sorely missed.

Several folks, most of whom were regulars at the center before the coronavirus forced everyone to stay home, had planned the procession in late May and kept it a secret for a month.

On June 26, I called Rose to get her reaction. “That was a surprise!” she reported. “Very humbling.” She said people blew their horns, cars were decorated with balloons and signs, and “Terri Byers with the fire department came through and a fire truck flashing and siren blaring, and a police car led the procession –- lights flashing and siren on.”

I asked Rose how many cars were in the parade. She said there were so many, she had no idea the number. She’d been too busy trying to see who was in each car and reading the signs. “[The parade] went on for quite a while,” said Rose, who added that people dropped off cards, which Rose took home and read that night. “I cried for two hours,” she shared.

Rose was deeply moved by the surprise parade and glad people had played it safe. “People need to take care of themselves,” she stated. “That’s what we’ve always tried to do at the senior center – take care of our seniors. We just love them.”

For nearly 28 years, Rose made it her mission to do everything she could to serve the men and women who called or came to the center, whether for social events, exercise, meals, programs, classes, or help with taxes or Medicare. Rose wasn’t just an administrative assistant who sat in an office. She was a listener and friend, a helper during events, and an instigator of programming. She said she was on her third generation of senior center participants. “They say, ‘My mom (or grandma) loved this place.'"

Rose shared that because she’s been around so many older adults over the years, she’s learned that “the seniors who age well stay active, they have a positive attitude, and they have a strong faith."

“We have people here in their 90s,” Rose continued. “They, like the others, focus on helping others."

“God put me here,” Rose declared, explaining that she was working for what used to be Catawba County’s mental health department in 1993 when she began to feel she needed to do something different. She put in her notice and that very night saw in the Hickory Daily Record that there was an administrative assistant position open at the Catawba County Council on Aging. Rose said she applied for the job by mail, posting the letter right after reading the advertisement. She got a call, went for an interview, and landed the job –- all in a matter of days.

Margie Abernethy, who started the Catawba County Council on Aging in 1976 and directed it until 2000, was the person who hired Rose.

A person of deep Christian faith, Rose said she always prayed for what was needed at the Council on Aging, including personnel and programs. Every time, she noted, the perfect person or solution came along.

A good example is the current director, Vickie Blevins. Rose said Vickie started as a volunteer at the center before becoming the Council on Aging’s leader. “She’s put a face on the Council of Aging out in the community,” said Rose.

As mentioned, Rose took an active part in the goings-on at the West Hickory Senior Center. For one thing, she started a trivia group that became so successful that a second group formed, making it possible for participants to choose between a daytime or nighttime group. Rose hosted the daytime players.

She also was involved in the center’s pen pal program by which seniors become pen pals with third-graders and then would meet each other face to face during a pizza party at the end of the school year.

It was obvious that Rose is very proud of all that the council does for people. “The council hosted the country’s first visually impaired Lions Club,” said Rose, explaining that Kim McCall, who used to be employed by the state to help visually impaired people, organized the club, which, prior to the COVID-19 pandemic, met monthly at the West Hickory Senior Center. “That’s one of the happiest groups that comes in here,” Rose declared.

“People have no idea all that the Council on Aging does for the community, for seniors,” said Rose. “Seniors need to be appreciated. Most around here worked in factories and paid taxes.”

Rose and I talked for over an hour, not only about her work at the center but also about her personal life and about how there’s really no situation in which people find themselves that they can’t be of service to others, even if it’s something as simple as sharing food or a kind word with worried people in hospital waiting rooms.

Rose’s final day was June 30. She called it “just the right time.” She’ll get to spend more time with her husband, two sons, two daughters-in-law and five grandchildren, one of whom is only 2 months old. “I’m looking forward to rocking him.” She’s probably already as busy now as she was when she worked. That’s just the way big-hearted people operate.

It wasn’t easy getting Rose to open up about herself. She’s a behind-the-scenes type of angel. I had to point out that maybe her story would influence others to become more service oriented, more loving. As Rose explained, “If you want to be loved, you give love away.”

So, in honor of Rose Hefner, go give some love away. Just don’t forget to wear a mask (covering your mouth and nose) and stand at least six feet away.

Meditation: Angry? Bible tells us what to do

We are divided. Have you noticed?

Bring healing to the hurting and hope to the hopeless

Jockey’s Ridge State Park in Nags Head, NC is home to the tallest sand dune in the Eastern United States. I had the opportunity to visit this …

HICKORY — The Missions Council of First Baptist Church of Hickory, chaired by Lloyd Bost, has approved three $5,000 donations to The Salvation…

I heard a prominent speaker years ago talk about the difference between ownership and workmanship.

The creative and touching ways Ramadan is going virtual

Rose Hefner with the Council on Aging and West Hickory Senior Center waves to family, friends and colleagues during her drive-thru retirement celebration.

Margaret and Guy Cantley of Sherrills Ford decorate their car prior to the drive-thru retirement celebration for Rose Hefner.

Vera Withers ties a poster to her car to celebrate Rose Hefner at the Council on Aging and West Hickory Senior Center.