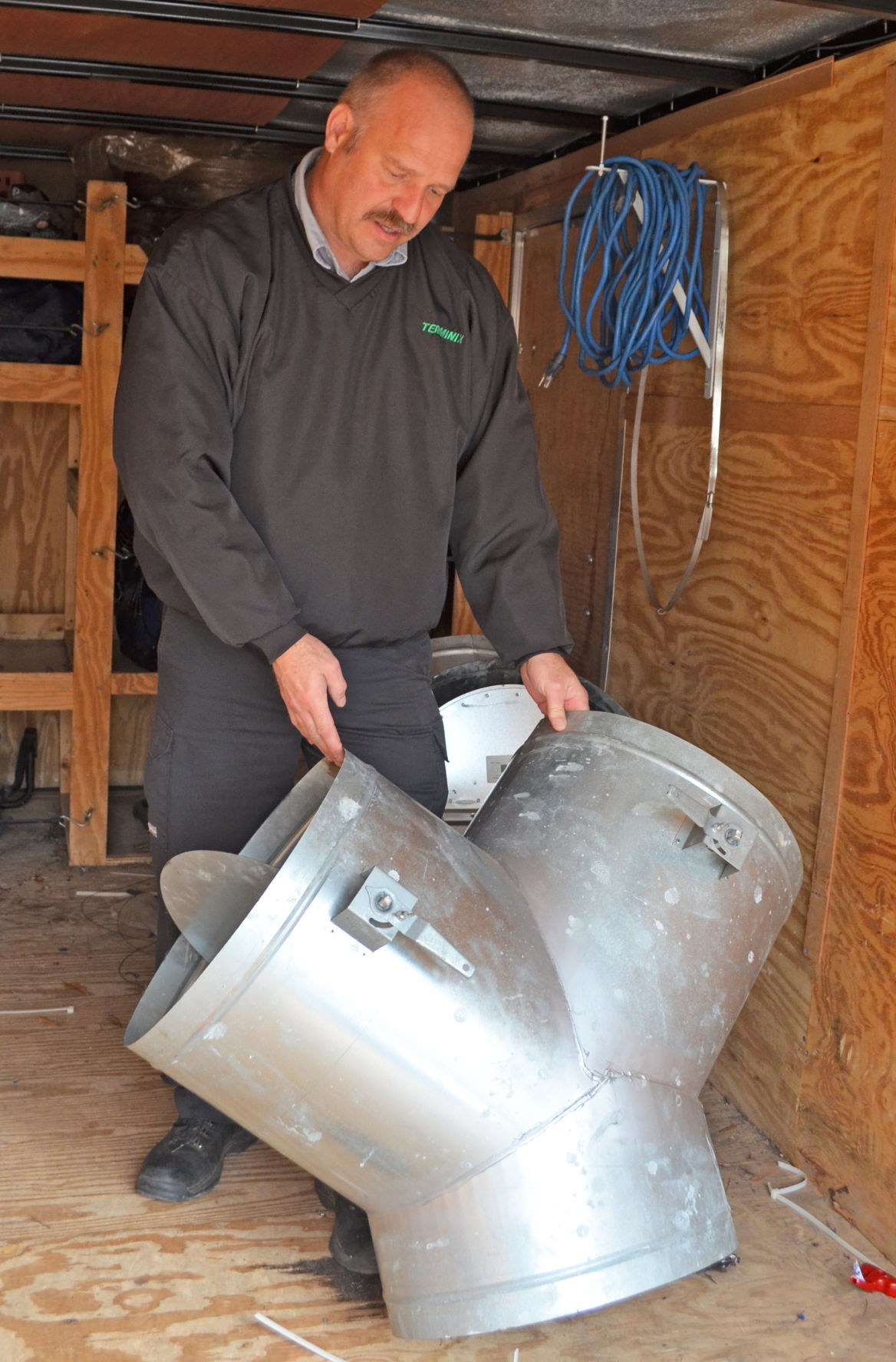 Robert Byrd, branch manager of Terminix in Hickory, displays a vent used on the propane heaters when treating a home for bedbugs. 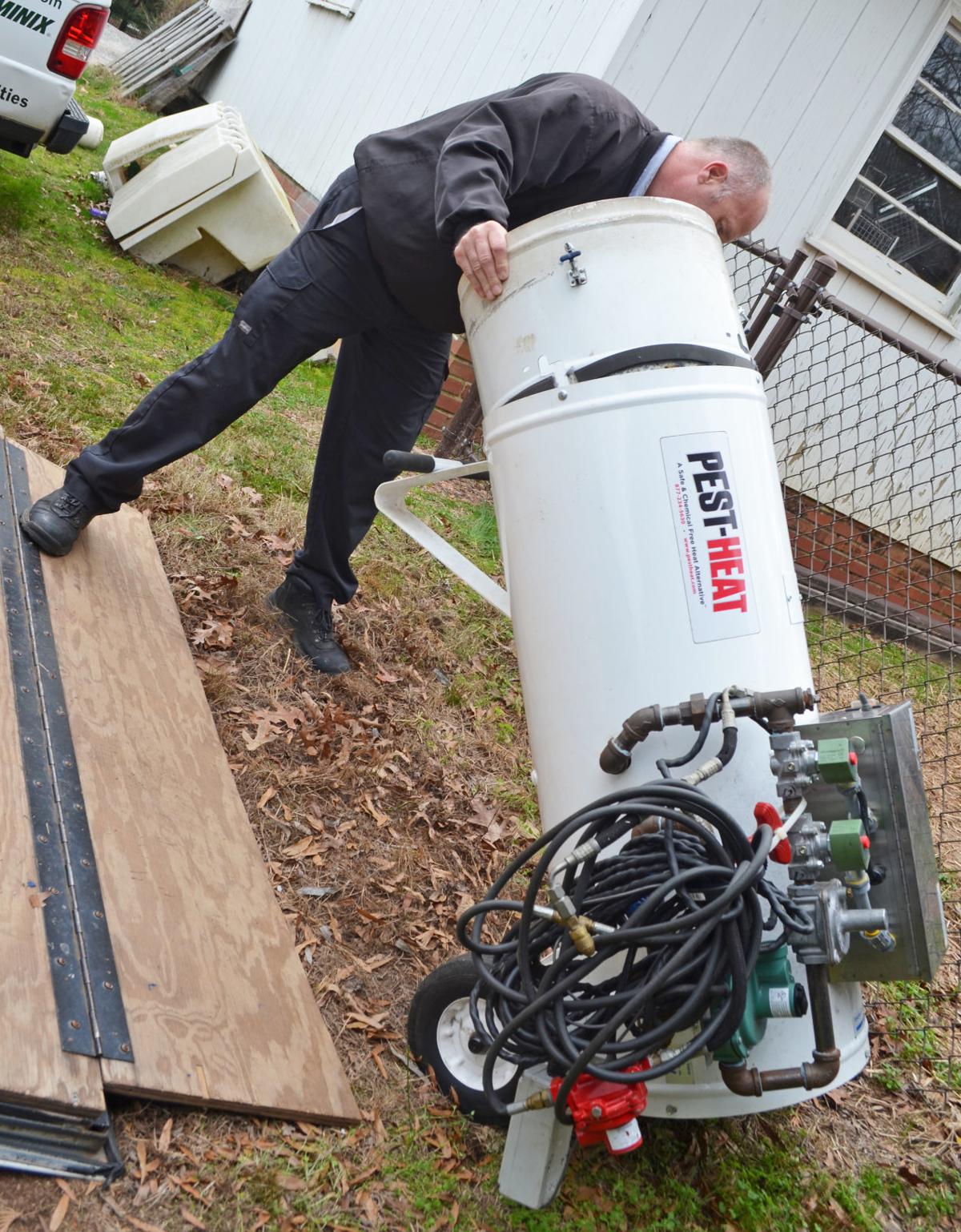 The bedbugs started in an apartment on the third floor of the Hickory building where Rebecca Shaw lives.

The 84-year-old heard about the incident but thought it was taken care of. That was not the case.

The bugs got into the building laundry, then into Shaw’s apartment. She knew when she felt the itch.

“You don’t know it ‘til they bite you,” Shaw said.

And then you know.

The tiny, dark brown bugs crawled into her mattress, laid eggs, infested her furniture and made the home she’d been in for 10 years unlivable.

Her slight, teetering body was soon covered in bites.

Shaw struggled to get her apartment owner to fix the problem, forcing her to spend time in the bedbug-ridden apartment. The stress, in part, led to two heart attacks in the last two months.

“It’s been terrible,” she said from her bed in Trinity Village, where she recovered from her second heart attack.

Bedbugs don’t pose a health risk, according to the U.S. Center for Disease Control, so there are no numbers tracking cases in Catawba County. But pest experts say bedbugs are on the rise.

“I can tell you three years ago we used to get one call a month (for bedbugs),” he said. “Now, it’s eight a week.”

His explanation is the bedbugs’ ability to hitchhike on people, clothes, animals, bags and more, making their way from one home to another with ease.

“They could be anywhere the public has been,” Johnson said.

Richard Byrd, branch manager of Terminix Pest Control in Hickory, wholeheartedly agrees. His branch, which covers Burke, Caldwell, Alexander and Catawba counties, saw a sharp increase in bedbug cases in recent years. Last year, the local Terminix treated the most cases he’s seen in the area in his 22 years in pest control.

As they get more abundant, they spread even faster, Byrd said.

Bedbugs feed on blood and most commonly infest soft materials like beds, couches, carpets and clothes. Infestations can range from a few bugs in the mattress to full-blown, with bugs covering the walls. But it only takes a few to start, said Bob Schon, territory manager for the Hickory branch of A-1 Pest Control.

“If they have two bugs, that’s enough,” he said. “It spreads quickly.”

And they don’t discriminate. Bedbugs can happen to anyone, Schon said.

“I usually reassure people — this is not because of race or finances or because of where you are or who you’re with,” he said.

Bedbugs are commonly picked up while traveling, Byrd said. Hotel rooms, public transportation and restaurants have so many people coming through that they can be ground zero for bedbug infestations.

Those infestations can start small. People often know from a couple bites, blood spots on their bedding from bites or they may even see a bug, Byrd said. Rarely do pest inspectors go to a potential bedbug case and not find bedbugs, Byrd said.

“If they’re calling us, they probably know (they have bedbugs),” he said.

During the initial inspection, exterminators head to the bedroom first, Byrd said. They check the seams of mattresses, behind the headboard and in the box spring. Then they look at furniture — under the cushions, in the seams and underneath. Next come electrical sockets, carpet and curtains.

“Either you look for it and find some or you go in and you see. You know,” he said. “Some places, they’re on the walls, floors, the furniture — it’s completely covered.”

Those are the worst cases he’s seen, he said. It’s only been a few, but he’s seen enough cases like that to stick in his memory, he said. And they still make his skin crawl.

Sometimes, cases can get that bad because of the high price of bedbug treatment, he said. The cost ranges from $1,000 on the very low end, to several thousand. Depending on the size of the space, it could cost $5,000, Byrd said.

When people hear the bill, it can scare them off, Byrd said. “I’ve seen people who don’t treat it because of the price,” Byrd said.

They search for cheaper solutions, like do-it-yourself treatment or low-cost companies. Both of those options can be ineffective and dangerous, Byrd said. All the while, bedbugs breed.

Professional companies most commonly turn to heat treatment, using large propane heaters to get the infested building up to over 130 degrees and keeping it that hot for hours.

Before any heat treatment can be done, people have to move out anything that could melt or explode in the heat — like blinds, clothes hangers, aerosol cans and ammunition.

Getting the entire space up to heat can take hours depending on size and temperature outside, Byrd said. Once up to heat, the two exterminators handling the case watch the thermostat on the heater to make sure it stays up to heat for at least three to four hours.

Once they’re done, people can’t come back in until the house is cooled down.

The whole process can take an entire day, putting people out of their homes. But that’s not the only inconvenience.

They also have to wash and dry their clothes and linens with industrial machines at a laundromat, Byrd said.

Some people, like Shaw, throw out their possessions altogether. “I’m getting rid of a lot of stuff,” she said.

Her family helped wash her things and throw some away in favor of buying new, she said. The cost can add up quickly, especially for those who can’t afford it. And there aren’t many resources for help.

The Catawba County Department of Social Services can help encourage people to get bedbugs exterminated in specific severe cases that pose a risk to a child or adult under their care, Director Karen Harrington said. They don’t provide funds to help pay for extermination.

Some nonprofits help those in need who need bedbug treatment but few have specific programs to help with the situation, said Robert Silber, executive director of the Eastern Catawba Cooperative Christian Ministry.

They’ve seen more cases of bedbugs recently but there’s little they can do to help, Silber said. When someone needs help, they have an exterminator they recommend and will help in specific cases, he said.

The best way to avoid the exorbitant cost of bedbugs is to protect yourself from the start, Johnson said. That means being vigilant about your surroundings — avoiding soft surfaces in public spaces, washing clothes quickly and being wary while you travel.

When Johnson gets home each day, he washes his clothes immediately.

“If we go out to dinner, if we go to church — the clothes I’m wearing out in public do not go back on the furniture at home,” he said.

Schon said his time in pest control has taught him to be extremely cautious at hotels. Before bringing anything into a room, he pulls back the sheets and looks behind the headboard, examines the seams of the bed, flips it over to inspect closely and sometimes even tears a tiny hole to check inside the box spring. Then, he places his belongings on the bathroom vanity — as far from the bed as possible.

“I’d be very vigilant in the inspection,” Schon said. “You have to be. It’s not about the dollar amount of the hotel, or even how it looks. We’ve treated everywhere.”

There’s nowhere you shouldn’t be aware of bedbugs, Byrd said. They can cling to children’s school bags and come home with the kids, he said.

Local school systems have systems they follow when a child’s home has bedbugs, but they have to know about it to try to contain it.

At Newton-Conover Schools, a letter goes out to parents of children in the same school. The student’s classroom gets inspected by an exterminator and the student’s personal items are kept in an air-tight box until their home is rid of bedbugs. The schools also help the family get the problem fixed, said John Robinson, public information officer for Newton-Conover Schools.

Students are told not to bring anything to school. When they get to school, they’re given a change of clothes, Snowden said. The school washes their clothes and the student changes back into them at the end of the day.

With all the precautions, it’s still possible to get bedbugs, Schon said.

“There’s not a way to prevent them other than being vigilant,” he said. “They’re really hardy, they’re resilient. They have a way of surviving.”

“I can tell you three years ago we used to get one call a month (for bedbugs). Now, it’s eight a week.”

Robert Byrd, branch manager of Terminix in Hickory, displays a vent used on the propane heaters when treating a home for bedbugs.