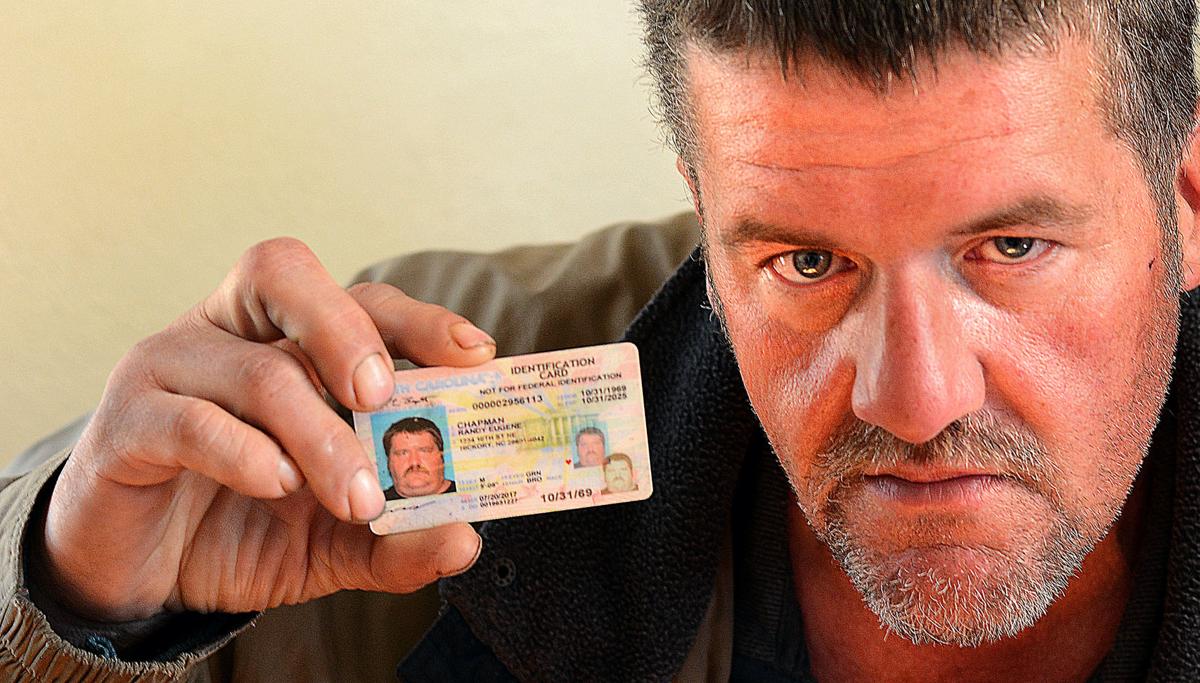 Homelessness takes a physical toll. Randy Chapman, a homeless man in Hickory, holds up a North Carolina identification card to show how much weight he has lost over the past two years. 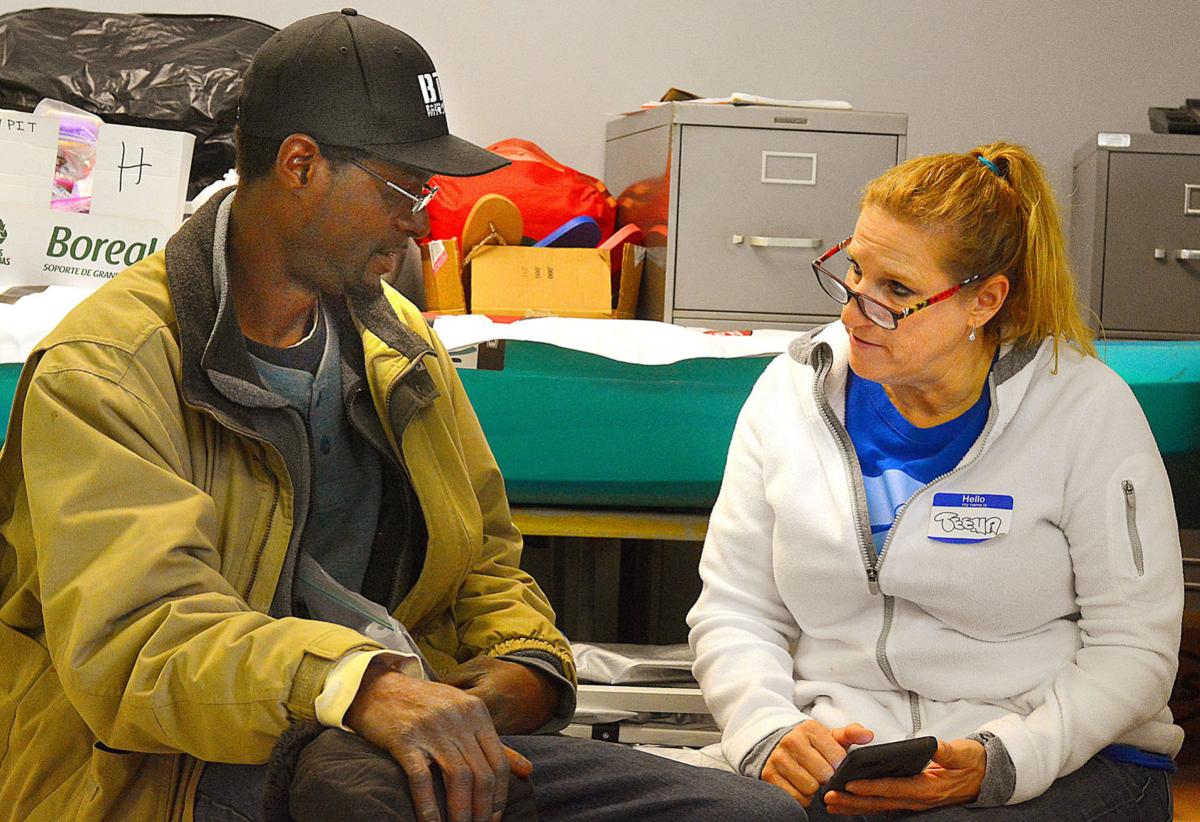 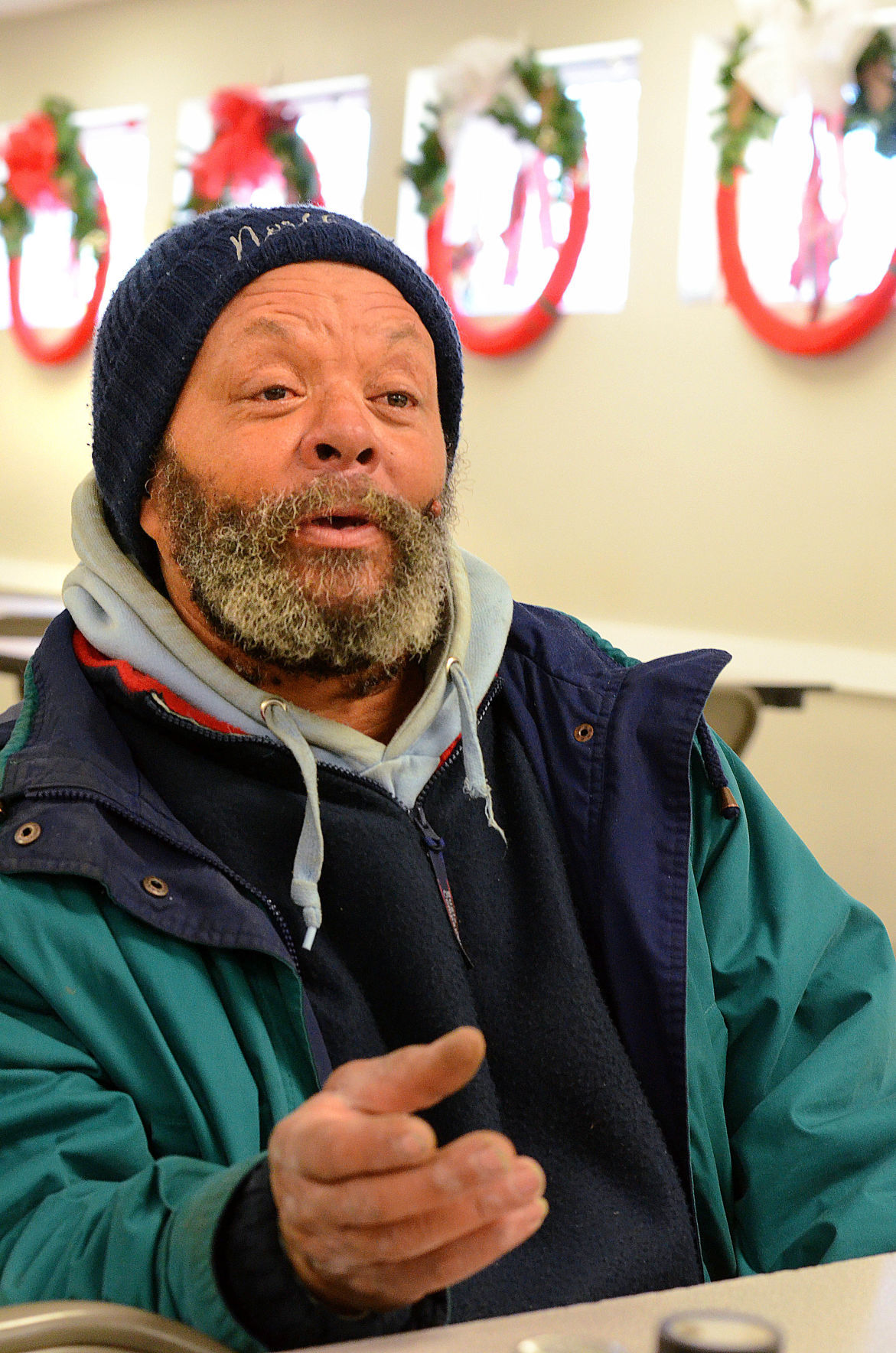 Troy Jones discusses his experience as a homeless person on the streets of Hickory as he waits for lunch at the Hickory Soup Kitchen. Jones is not homeless today.

Ask Randy Chapman the biggest challenge he faces being homeless and he says he’d probably give a different answer on any given day.

Transportation is a big one.

Sitting in the Lifehouse homeless resource center on Lenoir Rhyne Boulevard in early December, he pulls up the bottom of his pants to reveal swollen, discolored legs.

He said his legs got that way, in part, because of all the walking he does to get from the St. Stephens area, where he spends the nights, to Lenoir Rhyne Boulevard and downtown for medical and other services.

When it comes to transportation and work, Chapman said there’s a vicious cycle.

He recalled a previous job in which he had to catch the bus two hours before his shift started. Once the bus dropped him off, he still had a mile walk ahead of him and would often still end up there before the shift started.

He was in varying states of homelessness between October 2013 and January 2015, a situation he attributed to a problem with alcohol.

Chapman said he became homeless after losing his job as a welder in October. He said he’d had difficulty keeping up with the third-shift position. This led to problems paying his rent.

Chapman said he was kicked out after his landlord discovered he’d been allowing his friend and his friend’s two children to live with him in violation of the landlord’s policy.

For the third time in six years, Chapman was again homeless.

He said he’d stopped drinking but struggled with drug problems over the years.

As of early December, Chapman said he was going to the methadone clinic and was struggling with an addiction to methamphetamine.

‘... my hope in life kept getting worse’

Johnny Torrence showed up to the Hickory Soup Kitchen on Thursday to be counted as one of the county’s homeless.

Torrence said he became homeless nearly a year ago when there was fire in the duplex where he was staying.

On the day he showed up for the count, Torrence said he found out the rent on the unit has gone up $200, making it unaffordable for him on his fixed income.

He said this most recent stint of homelessness is not his first, but it is the longest.

At this point, Torrence is trying to figure out how to structure his life. Eventually, he wants to do two years of community college and then transfer to a four-year college.

At this point, however, he says getting a place to live is his main priority.

‘They reject them real bad’

He’d lost his job at a small landscaping company and had trouble keeping up with the rent.

Jones was able to get a job and save up enough to get his own place, but he recalls what it was like to not have a home. “Man, the winters hurts you out there,” Jones said. “You’re cold all night and then you wake up and you’re cold all day.”

Of all the challenges he faced being homeless, the worst was the rejection from other people, Jones said.

“You can look in people’s faces when they see a homeless person coming up towards them,” Jones said. “They turn their head or look the other way. They reject them real bad.”

Homelessness takes a physical toll. Randy Chapman, a homeless man in Hickory, holds up a North Carolina identification card to show how much weight he has lost over the past two years.

Troy Jones discusses his experience as a homeless person on the streets of Hickory as he waits for lunch at the Hickory Soup Kitchen. Jones is not homeless today.