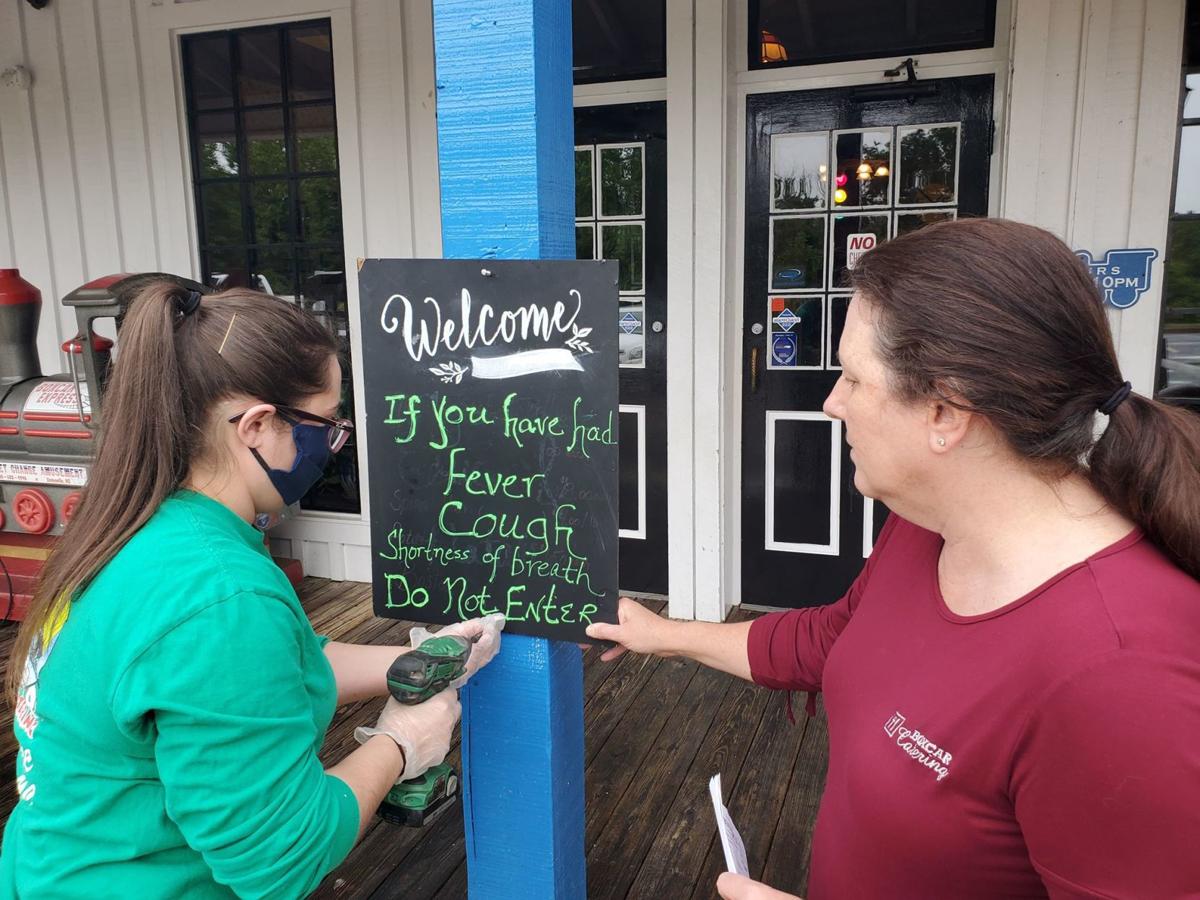 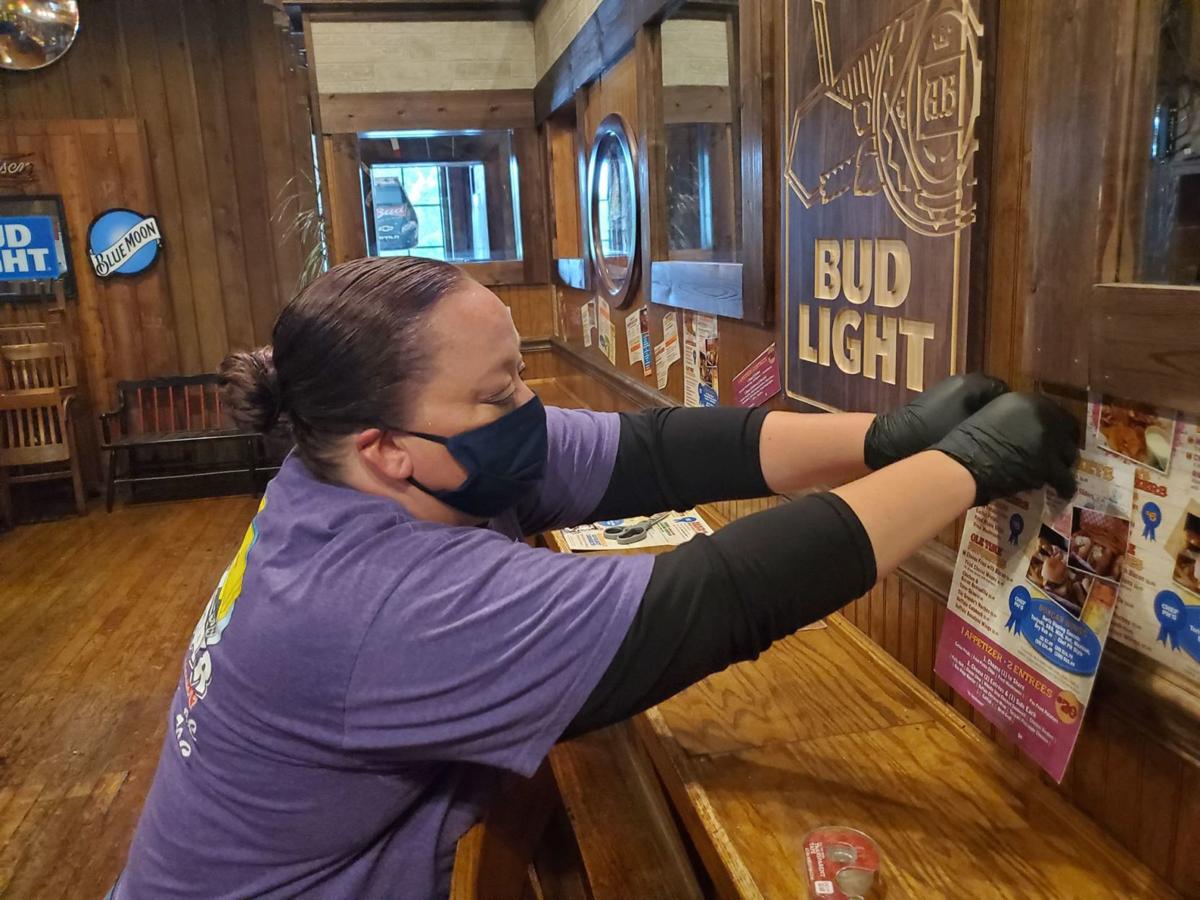 Boxcar Grille employee Angel Vines tapes up a menu as part of the restaurant's preparations for reopening on Friday. KEVIN GRIFFIN/HICKORY DAILY RECORD 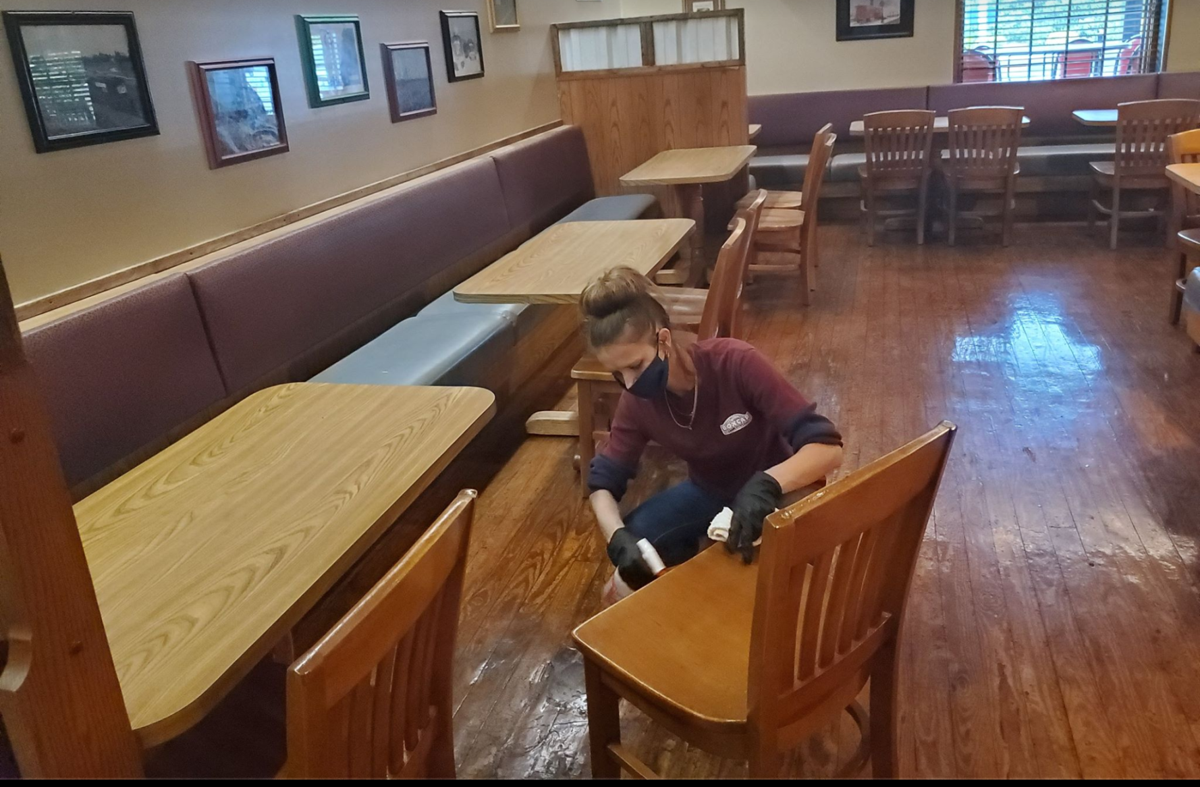 For the first time in more than two months, the doors of restaurant dining rooms will be open to customers starting Friday at 5 p.m.

However, many aspects of the dining experience will be changed.

While the new rules allow restaurants to reopen, some restrictions will remain. Restaurants are limited to 50 percent of capacity and must follow guidelines for social distancing and cleaning.

Some restaurants will be open as soon as the order goes into effect.

April Bolick, owner of the Boxcar Grille in Claremont, said her restaurant will open at 5 p.m. on Friday.

Workers were in the store Thursday making preparations -— taping menus to walls, cleaning chairs and posting a sign out front asking sick people to stay away.

The restaurant will also use disposable paper menus to prevent the spread of germs, Bolick said.

Other restaurants are waiting until after the Memorial Day holiday to welcome guests inside.

Jessica Sigmon of Callahan’s Café in Newton said the restaurant would be waiting until after Memorial Day to reopen.

Sigmon, the granddaughter of the owners, said the restaurant weathered tough times the last few months. She said she’s been working for tips alone and her grandparents are working just to pay their bills. The restaurant is planning to bring back the five employees who were laid off, Sigmon said.

Blake “Bee” Watts, owner of Shell’s Bar-B-Q in Hickory, said his restaurant will open next Wednesday.

The delay will allow employees to have a relaxed Memorial Day and provide additional time for the restaurant to prepare for customers.

He said the restaurants is waiting on an order of cloth masks for employees and will be installing a sneeze shield at the cash register.

Watts emphasized the need for customers to be patient as restaurants reopen.

“I would like everyone to be aware that we’ve had nine weeks with no service in the dining room … and it is going to be struggle,” Watts said. “It’s going to be a struggle for everyone and people are going to have to be patient.”

BETHLEHEM — Lowes Foods has renovated its store at 9441 N.C. 127 in the Bethlehem community of Alexander County. The completion of updates to …

HICKORY — Summer Grimaldo has joined Realty Executives of Hickory at 785 U.S. 70 SW where she will specialize in the marketing and sales of re…

CONOVER — Certified Hazard And Decontamination Specialists (C.H.A.D.S) specializing in environmental decontamination and mitigation of the inf…

Amazon has far outpaced the S&P 500, but investors need to consider risk before piling too heavily into a single stock.

Despite the COVID-19 pandemic shutting down businesses and causing turmoil in the economy, Catawba County’s economic incentive programs remain…

How to save extra money for the holidays

How to save extra money for the holidays

How to set up a good homeschool environment

How to set up a good homeschool environment

Boxcar Grille employee Angel Vines tapes up a menu as part of the restaurant's preparations for reopening on Friday. KEVIN GRIFFIN/HICKORY DAILY RECORD