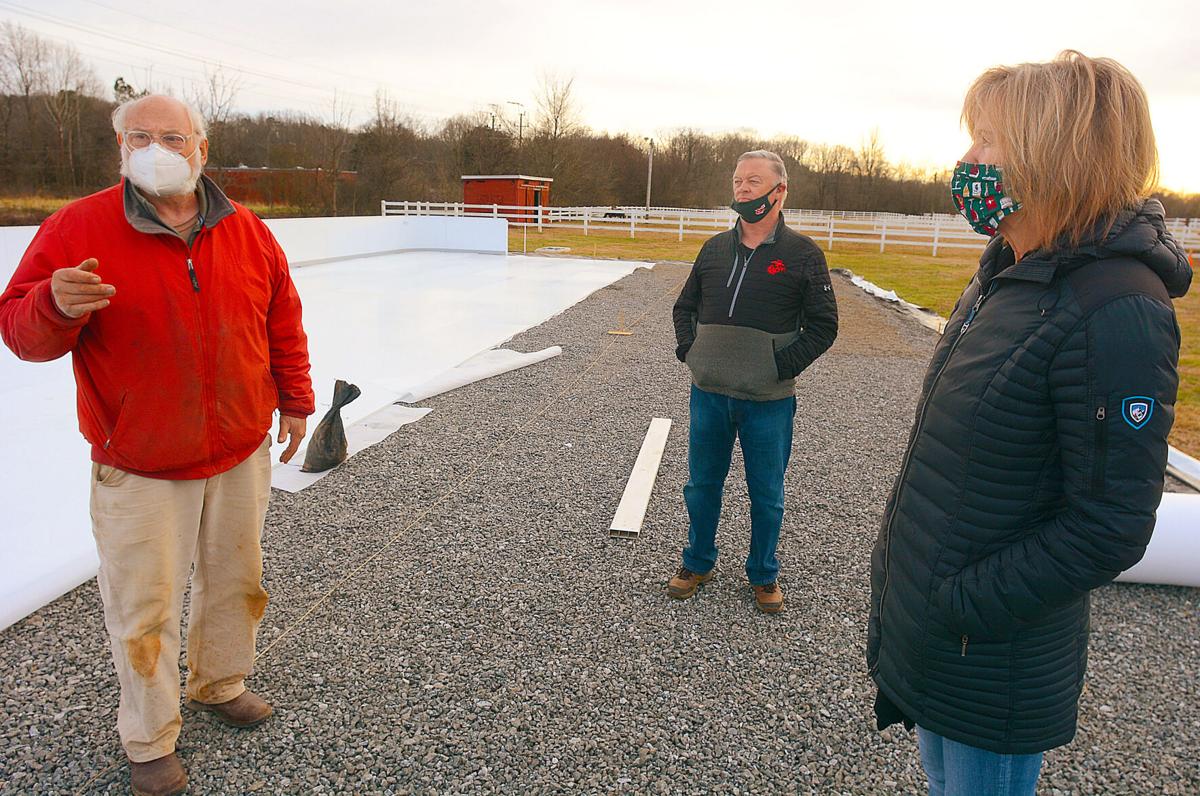 Michael Waltuch, Dennis Baucom and Twyla Deese, co-owners of Catawba Farms in Newton, discuss how the synthetic ice rink will be usable year-round. 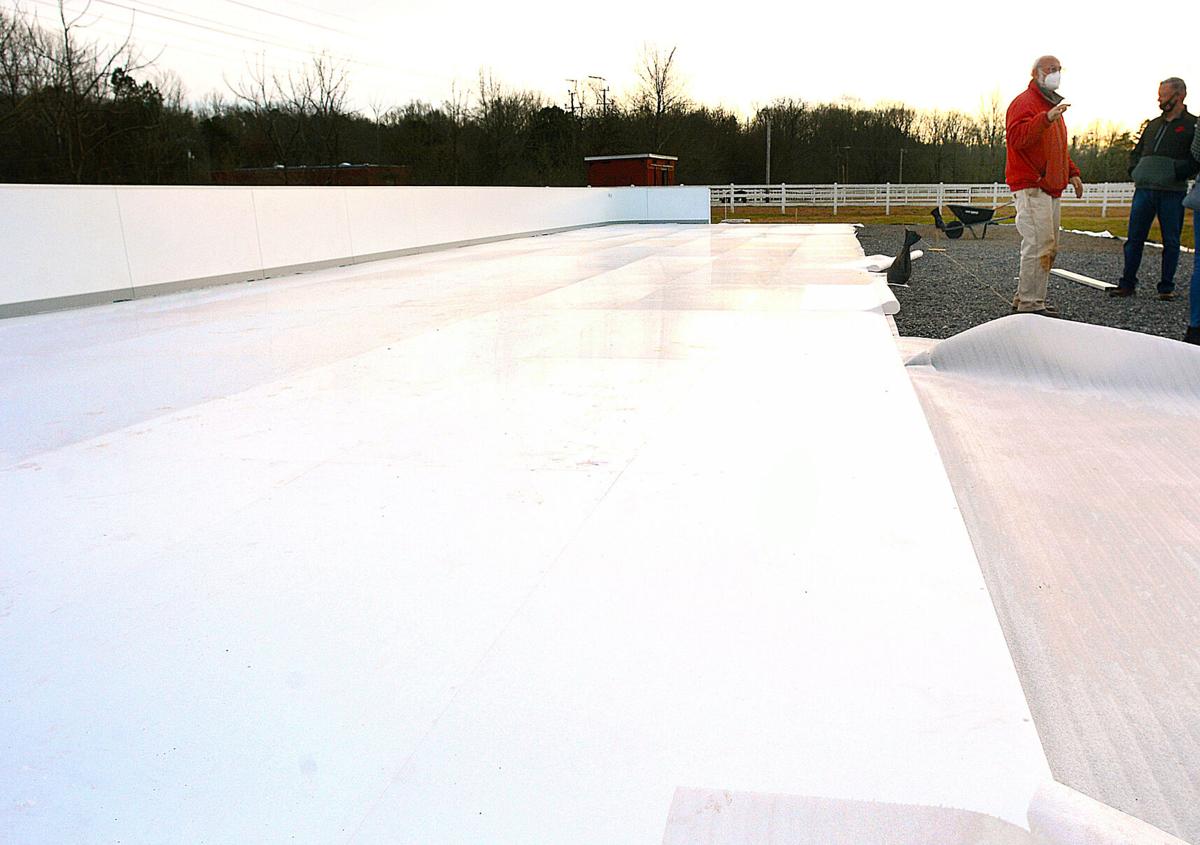 Michael Waltuch (right) describes how the synthetic ice skating rink is eco-friendly and does not require water. 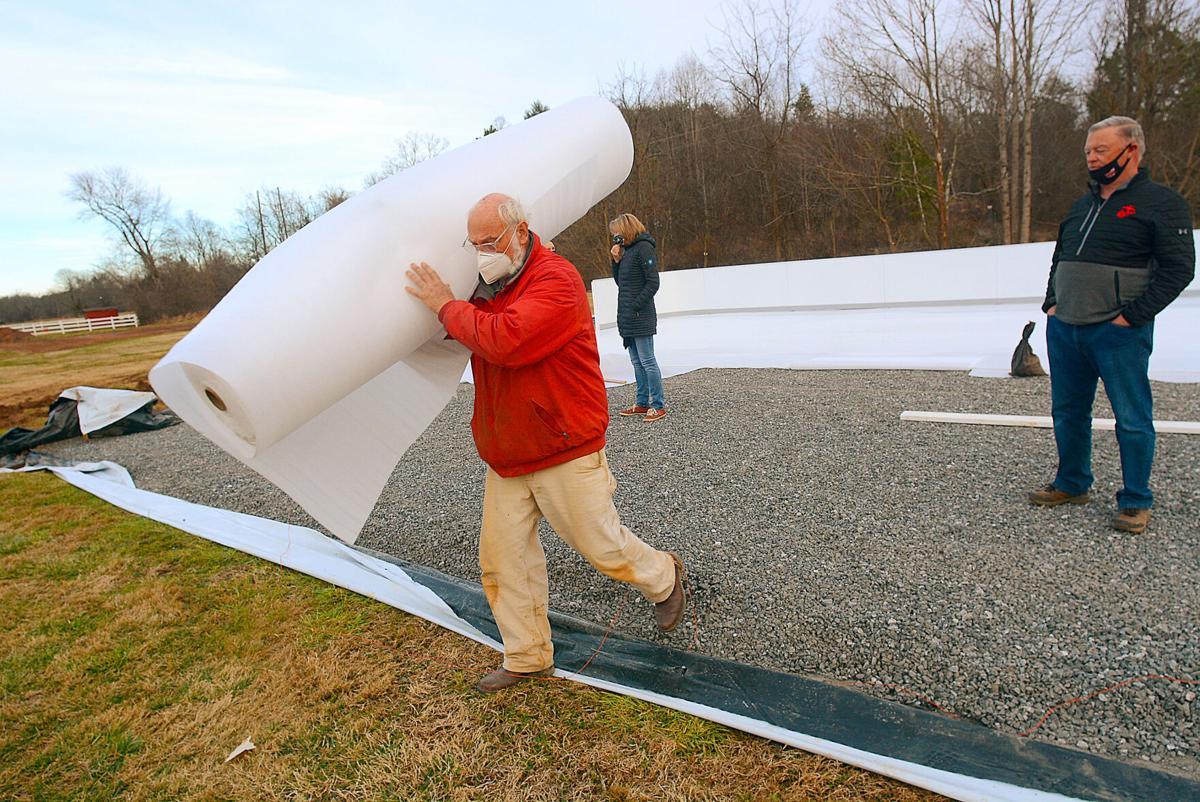 Michael Waltuch carries a roll of foam padding as he finishes work on the plastic skating rink for the day as Dennis Baucom looks on.

The winery, brewery and inn bought a synthetic ice rink. It will be open year-round.

Catawba Farms’ owners Twyla Deese, Michael Waltuch and Dennis Baucom hope the rink attracts more people to the farm. They also see the rink as a benefit to the community.

“After what we’ve all been through this year, it’s our way of giving back,” Deese said.

Waltuch came up with the idea in early 2020, before the COVID-19 pandemic hit. At the time, Catawba Farms had just opened a brewery, another addition to the business. Adding a synthetic ice rink was not a priority — the bottom of the list, in fact.

Then, COVID-19 entered Catawba County and halted any plans the business had. “The idea was still in my head but we were focused on surviving,” Waltuch said. “That was our main focus.”

As the pandemic raged on, limiting indoor capacity, Catawba Farms found a niche. With a large property and plenty of outdoor space, they found people felt comfortable visiting Catawba Farms and bringing their family, too, Deese said.

Slowly they realized an artificial ice rink could make sense.

By summer, they started joking about it — saying they would start a Newton curling team. Then, the owners started seriously looking into it, Waltuch said. They considered renting, but the cost was so high they decided to buy instead, Baucom said. In December, they ordered the rink. It was purchased from a Switzerland-based company, Waltuch said.

The rink, made of extremely smooth, opaque white squares of plastic, shipped from Switzerland in December. It took several weeks to arrive and with each day anticipation grew. It arrived Dec. 31, along with 140 ice skates.

Construction began this week. A gravel base keeps the plastic, less than an inch thick, level. A layer of thin foam goes between the gravel and plastic. The plastic squares fit together with a tongue and groove system.

Getting the rink put together is exciting, but it won’t feel real until Waltuch gets on the “ice” himself. “I’ll know it’s real when I’m looking at the sky because I’ve fallen on my butt skating on it,” Waltuch said.

At least when skaters fall on the synthetic ice they won’t get wet, he said. It is also more shock absorbent than real ice, Waltuch said.

The ice is also considered environmentally friendly. It does not require water or electricity to keep it going — just a good clean and polish every now and then.

At first, due to COVID-19, the rink will be limited to 30 ice skaters at a time, according to a press release from Catawba Farms. The price will be $10 for children and $15 for adults for an open skating session, which includes skate rentals.

The rink will open quietly once construction is complete. The grand opening is on Jan. 16.

Eventually, the rink will be moved closer to the Catawba Farms tasting room and a cloth covering will keep out the elements, Deese said.

A Dollar General is opening at the location of a former nursing home in Hickory.

Michael Waltuch, Dennis Baucom and Twyla Deese, co-owners of Catawba Farms in Newton, discuss how the synthetic ice rink will be usable year-round.

Michael Waltuch (right) describes how the synthetic ice skating rink is eco-friendly and does not require water.

Michael Waltuch carries a roll of foam padding as he finishes work on the plastic skating rink for the day as Dennis Baucom looks on.