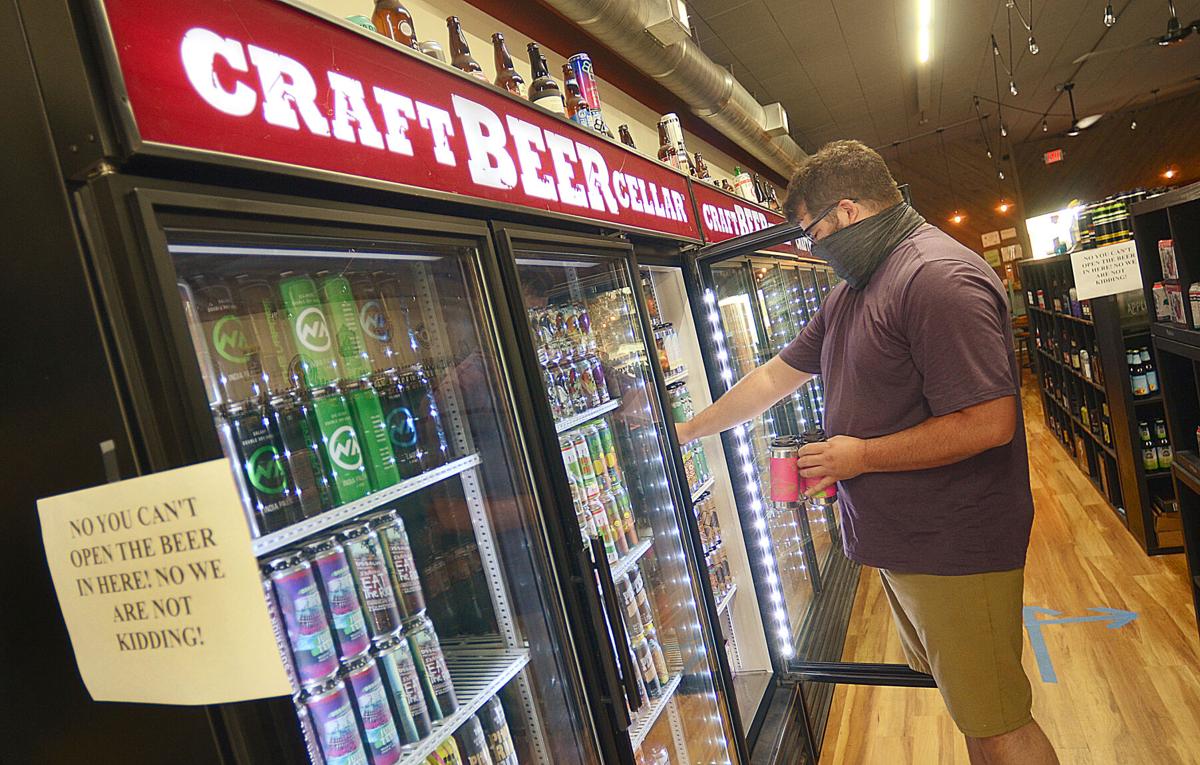 Ben Heilman, owner of Craft Beer Cellar, restocks his coolers. He has not sold beer for on-site consumption since March. 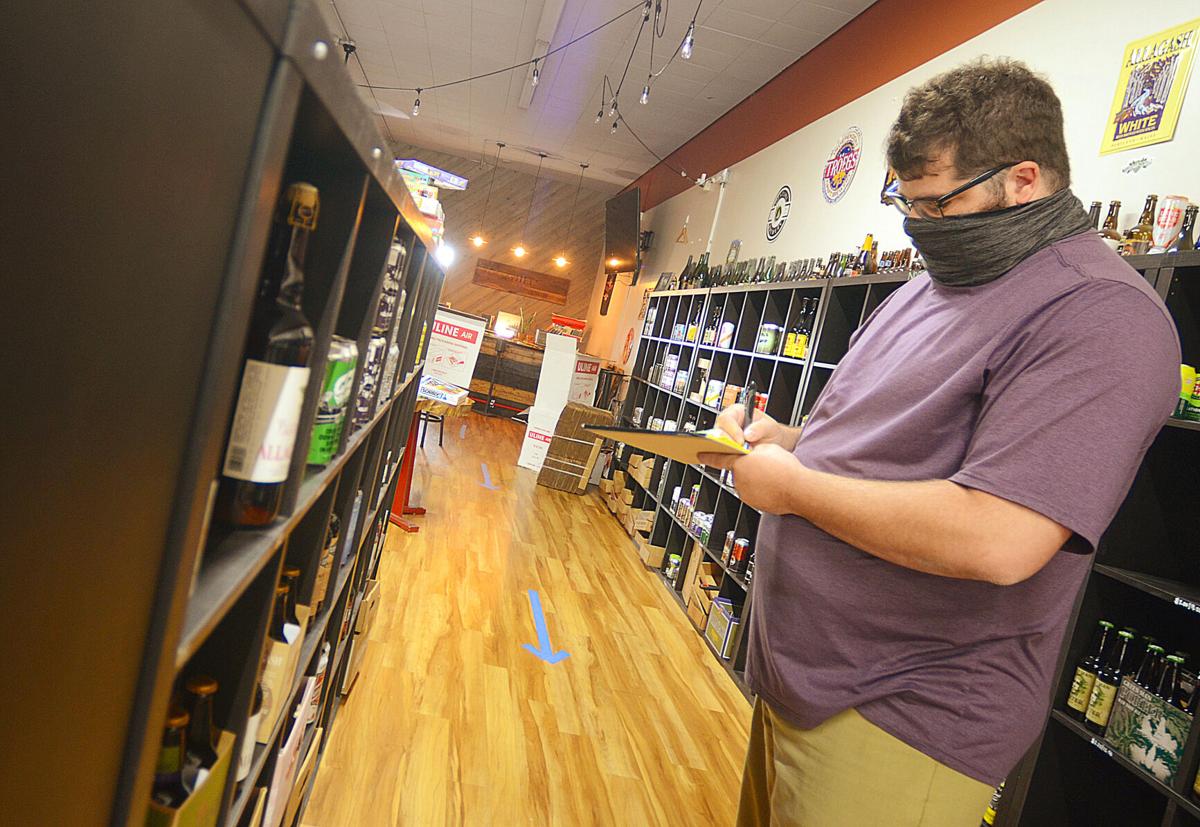 In the four years that the Craft Beer Cellar of Hickory has been open, owner Ben Heilman has grown a community of customers. He’s built relationships with them as they sat at the bar sipping cold beer poured from a tap.

COVID-19 restrictions changed that. No one has tipped back a beer in the business since March 17, Heilman said.

The order was extended on Wednesday, this time until Sept. 11, Cooper announced.

Luckily, Heilman has another part to his business: canned and bottled beer for off-site consumption. He’s been able to boost his income with an influx of people buying packaged beer to drink at home, he said.

“We thought it was going to affect us more than it did.” Heilman said. “But apparently package sales have gone way up for us. We were very surprised. I was fully expecting to basically have to go back to bare bones (to stay open).”

Though his revenue has been bolstered with package sales, serving beer at the bar is important to his business. He noted the mark-up of beer on tap — about 200 percent from purchase price — is significant.

He also misses the atmosphere.

“It sucks not being able to see our loyal customers on a regular basis,” Heilman said. “Whenever they come in, I just wish we could sit down and talk. It’ll be nice to have that back again.”

That’s only once the order is lifted, and Heilman doesn’t have high hopes. He wasn’t surprised to hear of the extension to the order on Wednesday. He just hopes it will help stop the spread of COVID-19.

“It’s kind of a mixed bag — I would love to be able to fully reopen my business but then again if this is what it takes to finally be good and done with this whole coronavirus thing — it sucks but it’s what we have to do,” Heilman said.

The order also continues to limit restaurants to 50 percent capacity. The limits are felt in places such as the Rose and Daisy in the town of Catawba, owner Gilda Caputo-Hansen said.

The restaurant has been struggling since the pandemic began.

The restaurant’s capacity is decreased, but fixed costs like rent are not, Caputo-Hansen said.

Caputo-Hansen said she’d like to see the restrictions lifted. People have enough information now about the risk factors and prevention methods for COVID-19 to make their own choices about whether or not to go out, she said.

“The people who want to go out will go out; the people who don’t will stay home whether or not there’s a restriction or not,” Caputo-Hansen said. “And so I think at this point we’ve all been through it long enough where I kind of think the government should sort of back off a little bit because people know.”

For the same reasons, Donna Hedrick, owner of Bourbon Street Alley in Hickory, believes the extension of the order means little to the general public. Whether it’s extended or lifted, people are making their own choices on where they do or don’t want to go, she said.

“The people are the ones who decide what they want to do,” Hedrick said. “It doesn’t matter what (Gov.) Cooper says one way or the other. These people are going to decide if it’s still safe for them.”

At first, state restrictions to limit the spread of the coronavirus had a larger impact and kept many people home, Hedrick said. Now, even if restrictions were lifted, Hedrick believes those who are staying home would continue to stay home.

“From what I’ve seen, it doesn’t matter what I say or what they say, it’s going to depend on what they feel is safe for themselves — do they feel comfortable being in a bar or restaurant?” Hedrick said.

With plenty of outdoor seating and space, the 50 percent capacity restriction doesn't impact Bourbon Street Alley. The largest impact to her business is the new 11 p.m. cutoff for alcohol sales, she said.

While she didn’t expect the Safer-At-Home order to be extended, it won’t impact her business much, Hedrick said.

“People are getting used to this new normal and now they're seeing the effects of all of it and making decisions for themselves,” she said.

Under the Safer-At-Home order, phase two of North Carolina’s reopening plan, April Bolick, owner of Boxcar Grille in Claremont, has seen her indoor dining revenue drop 33 percent. Her catering service has also taken a hit amid cancellations for events such as weddings.

Like Hedrick, she does not believe people will come running back to restaurants once remaining restrictions are lifted.

“Even after everything opens up, I don’t foresee it being back to normal, so to speak, whatever normal is,” Bolick said. “I think the normal will be a new normal, if that makes sense.”

The 2020 winners of the Hickory Young Professionals Top 10 Under 40 have been announced.

Crate and Barrel plans to open a new warehouse and distribution center in Newton that will bring 150 jobs to Catawba County by 2022.

Crate and Barrel plans to open a new warehouse and distribution center in Newton that will bring 150 jobs to Catawba County by 2022.

TAYLORSVILLE — Craftmaster Furniture is growing its production with an expansion into Caldwell County.

A packaging company based in Wisconsin bought a Hickory company and plans to quadruple production at the plant.

Shell's Bar-B-Q closes after 67 years; restaurant was an institution in St. Stephens community

It was with great apprehension that Blake “Bee” and Lisa Watts shut the doors on Shell’s Bar-B-Q for good on Saturday.

Roger Zamora ran his restaurant, Los Compadres, in Valdese for just two years before deciding to open his next location.

Bourbon Street Alley will close its doors on Main Avenue Southwest for the last time on Sunday, but the owner hopes to open in a new location soon.

Shell's Bar-B-Q on Springs Road in Hickory closed Saturday after 67 years. Owners Blake "Bee" an Lisa Watts say it's time for them to retire.

Ben Heilman, owner of Craft Beer Cellar, restocks his coolers. He has not sold beer for on-site consumption since March.