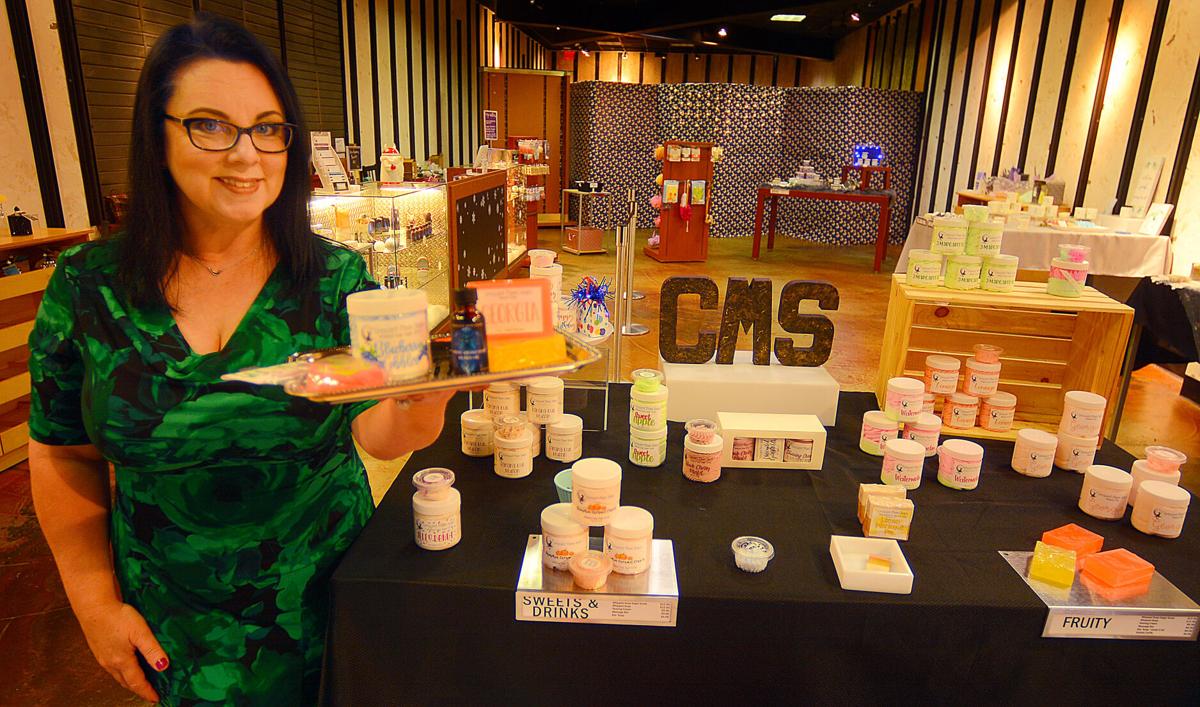 Angela Ramsey, owner of Crescent Moon Soaps, displays a tray of soap, oils and bath bubbles at her store in Valley Hills Mall. 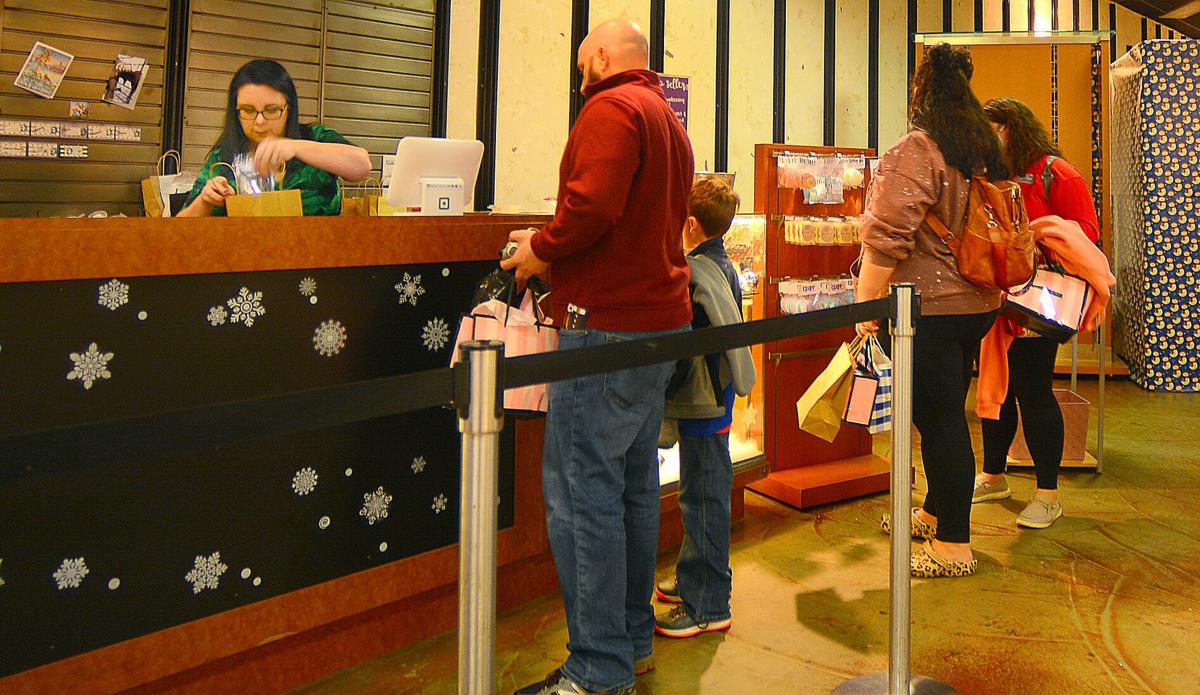 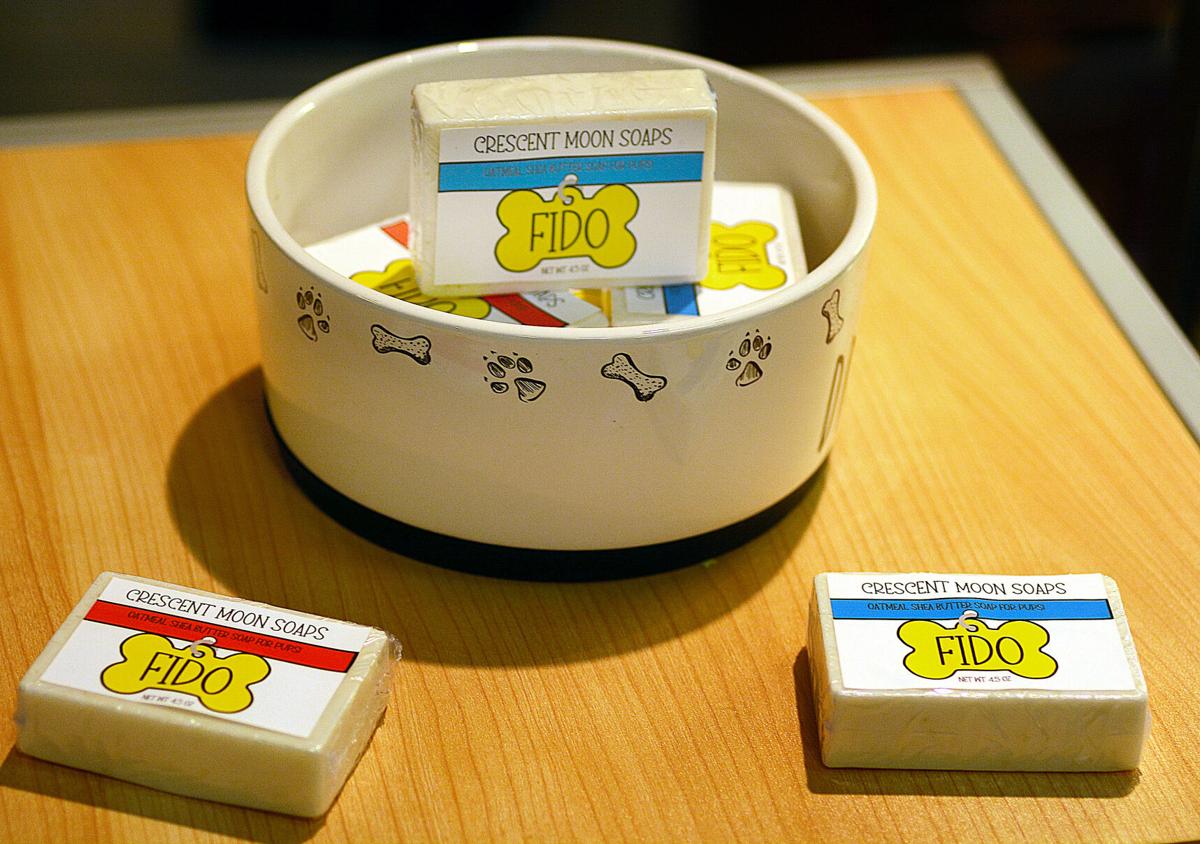 While shopping at Crescent Moon Soaps, don't forget to buy your four-legged family members a bar of soap.

Angela Ramsey's battle with fibromyalgia and lupus created a multitude of skin issues for her.

She wanted a soothing, natural soap that wouldn’t irritate her skin.

“I was doing a lot of research and diving in to what the skin needs — hydration, nutrients … and I found that goat’s milk is extremely, extremely good,” she said.

So she bought two goats.

Ramsey had no experience caring for farm animals or making soap from scratch. Despite that, a year later, she opened a store, Crescent Moon Soaps, selling her goat’s milk soap and other products at Valley Hills Mall.

She started off only making soap for herself, she said. She scoured the internet for tutorials on soap making and lessons in the craft. She perfected her soaps, and soon she was selling to friends, family and neighbors.

“Their friends told their friends and everyone was like, ‘Oh, my gosh, I’ve got to have this,’” Ramsey said.

Ramsey has jumped from career to career — law enforcement, flight attendant, mail delivery person — but in soap-making, she said, she finally found her place.

“I have probably lived the life of about five or six different people,” she said. “I feel like I'm a Jill of all trades and finally a master of one.”

The soap trade was her calling, she said, but when she told friends and family she wanted to open a storefront, she met with resistance. Some thought she wouldn’t make enough money, others thought the economy wasn’t in a place to open a new business.

“I had so much negativity from people saying I shouldn't do this, but something inside of me was saying, ‘No, girl, you got this,’” Ramsey said.

In October, she opened the shop. Business boomed. She is selling through her Facebook page but also through her shop in the mall. She gets wiped out of inventory regularly.

Opening the store was no easy task — she had to get insurance, purchase a sign, increase the amount of soap and other products she was making and hire her daughter to help out.

“It was completely nerve-wracking to be honest because there was so much that I had to do just to be opened,” Ramsey said. “Now, it’s an amazing feeling. There's days I wake up, and I can’t believe it.”

Ramsey hopes her success shows others they can succeed despite the effects of the COVID-19 pandemic. She meets people who want to support small businesses and sees an increasing desire to buy local.

“If there is a message I can pass on to everyone, it’s ‘Don’t let our current situation with health and the economy be a deterrent from a long-term life goal — it's just a snag,’” Ramsey said.

Ramsey hopes her business grows even more. She’s moving the shop into a new storefront in the former Yankee Candle location in the mall soon and hopes to continue to grow there. Her sign and name, Crescent Moon, shows that growth, she said.

“I have always just loved what the crescent moon looks like — it’s in a transitional phase. It's something that started out new and is in transition to turning into something big and full and beautiful, and to me it's exactly what my company is — it’s in that transitional phase to being a full-fledged business.”

This year, business has looked a lot different. Amid it all, I was still able to write about our local businesses, as well as how the coronavi…

Angela Ramsey, owner of Crescent Moon Soaps, displays a tray of soap, oils and bath bubbles at her store in Valley Hills Mall.

While shopping at Crescent Moon Soaps, don't forget to buy your four-legged family members a bar of soap.